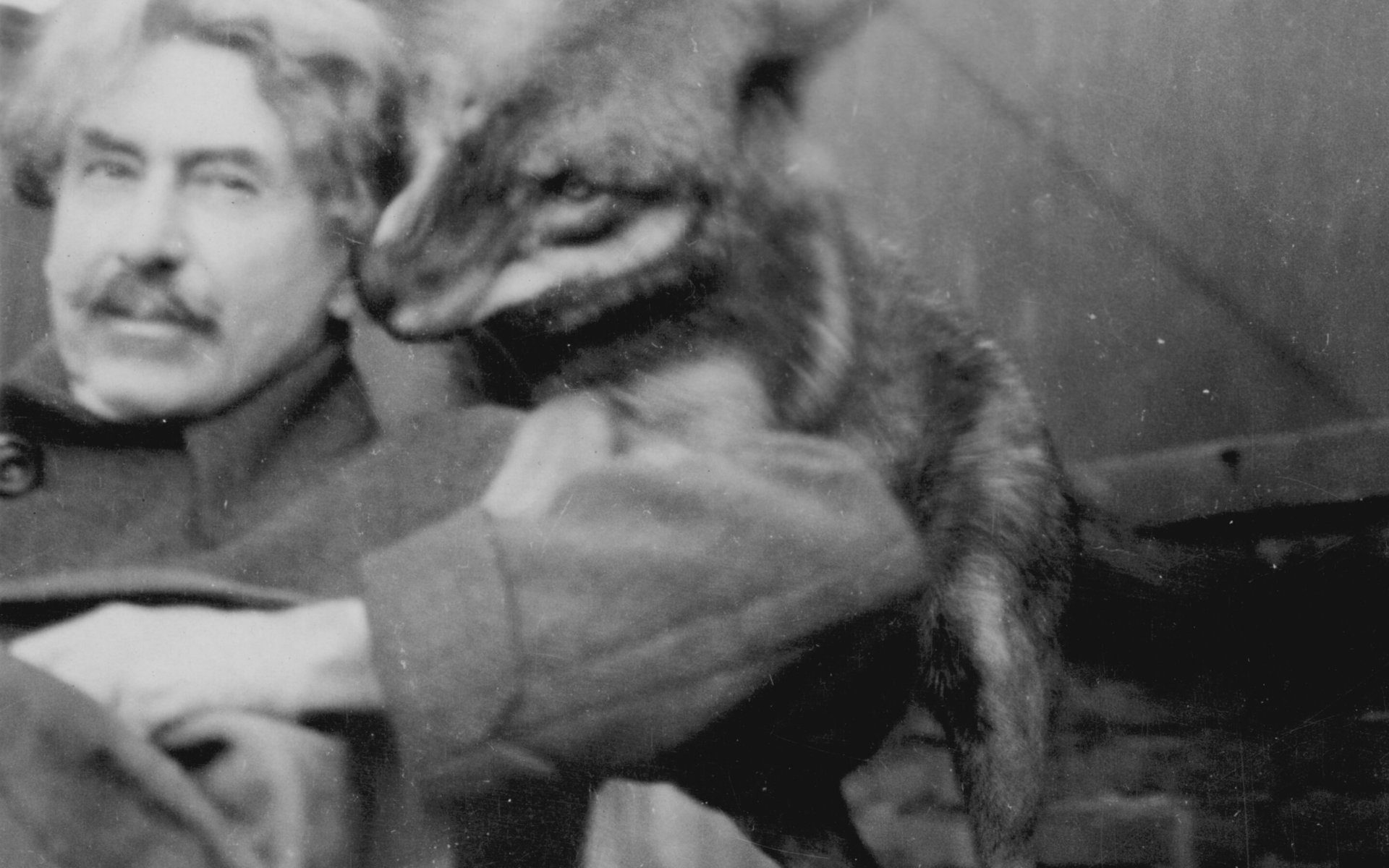 Seton in conversation with wolf, 1930s

I might have called this: The Last Chapter, although running 18 years, it would be another long one if including all detail. By 1928 Seton completed his magus opus, Lives of Game Animals. Afterwards, his production of new titles slowed down considerably. These included one final compilation of animal stories, two animal biographies, an autobiography, and a monograph on the legacy of Native American peoples. (See Seton Annotated Publications)

The major development, however, was his decision abandon New York and Connecticut to make a new beginning in New Mexico. Seton had probably been thinking about his next move for some time, but by 1928 he and his secretary (and lover) Julia Moss Buttree began an organized search for a new home. They settled on looking in the area surrounding Santa Fe.

Seton gave almost no reason for why he made the change. One clue, from Trail of an Artist-Naturalist, described the metaphysical dimension. Seton’s mystical side, “The Buffalo Wind,” a series of spiritual crises (not necessarily bad), which had guided him throughout his life, occurred again, this time directing him to go West. (“the Call of the West was ever in my heart.”)

Why He Moved To New Mexico

I can share my observations for what lay behind the move.

Just as he had fled New Mexico decades earlier after the death of Lobo, the situation now reversed. There were ample reasons to leave the Northeast. A failed marriage, the disastrous relationship with the Boy Scouts, the foundering of his Woodcraft movement, and drop-off from the height of his celebrity status in New York suggested trying something different. New Mexico held certain advantages. He already knew at least a few people in Santa Fe and its having a strong art and literary scene must have appealed. The mild, sunny climate, beautiful mountain and desert scenery, and relatively inexpensive land and labor prices proved irresistible to a naturalist with a great love of open country.

He could buy a lot of land (a huge expanse compared to anything in Greenwich) and build his third and final Seton Castle (1932-1934 for the main building). The “Lobo” legacy gave Seton a historical tie to the land—Lobo’s Currumpaw was just a few hours to the Northeast. He founded Seton Village, a group of homes around a central plaza that continues to thrive today.

Left unstated, but of high importance, was Seton’s growing appreciation of indigenous culture(s). Seton had established his honoring of traditional Native American life in his extended essay, “Spartans of the West,” (1912) with a deeper examination of one aspect, Plains Indian sign language in Sign Talk (1918). Over the years, apparently influenced by his friends Charles Eastman and Pauline Johnson, among others, Seton’s appreciation of contemporary Indians deepened as he came to understand the cultures as living, not just something from the past. New Mexico was very much “Indian Country.” He seems to have developed close friendships with people from San Illdefonso Pueblo and likely among other tribes as well.

Seton set up a training program for Woodcraft adult leaders in conjunction with a children’s summer camp (1931-1940). He took U.S. citizenship in 1931, married Julia Moss in 1935, and toured Europe with her in 1936 where he made a radio broadcast from Prague calling for world peace.

Most importantly for their personal lives, Seton and Julia adopted a newborn child in 1938, naming her Beulah. Like just about everyone in the extended Seton family, she later changed her name. Beulah became Dee. The examples of name-changing go back generations to when his ancestors changed their last name from Cameron to Thompson. (Seton and some of his brothers took the name of their distant relatives, the famous Setons of Scotland.) Seton’s first daughter Ann, published novels as Anya. Julia’s family name had been Moses before changing it to the less Jewish-sounding Moss.

Remarkably for a man of his generation, Seton remained in relatively good health until his final year. He and Julia had continued their wanderings across America giving lectures on Native American cultures and no doubt, reciting the Lobo story. This seems to have mostly ended by the beginning of the war if not before. During the 1940s the couple continued to leave for warmer climes during the winter, Seton Castle being more imposing than practical during the cold season in New Mexico.

Seton published one more book with the help of his friend the philosopher Manly Hall. He had considered writing about the use of canines in wartime, but settled for a single story about a heroic dog serving in the French army during World War I.

Seton died at home in his bedroom at Seton Castle on October 23, 1946. Although he had long since faded from celebrity status, Time magazine, the New York Times, and other publications noted his passing. Many of his books have remained in print since their first publication, including Wild Animals I Have Known (1898). Not a bad record for any author.

Seton kept his views of the hereafter to himself, although he held out the possibility that the “Trail” might continue onward, finally arriving at a river, continuing to the sea. (Buffalo Wind.) If so, perhaps there he found Lobo and at last made amends.