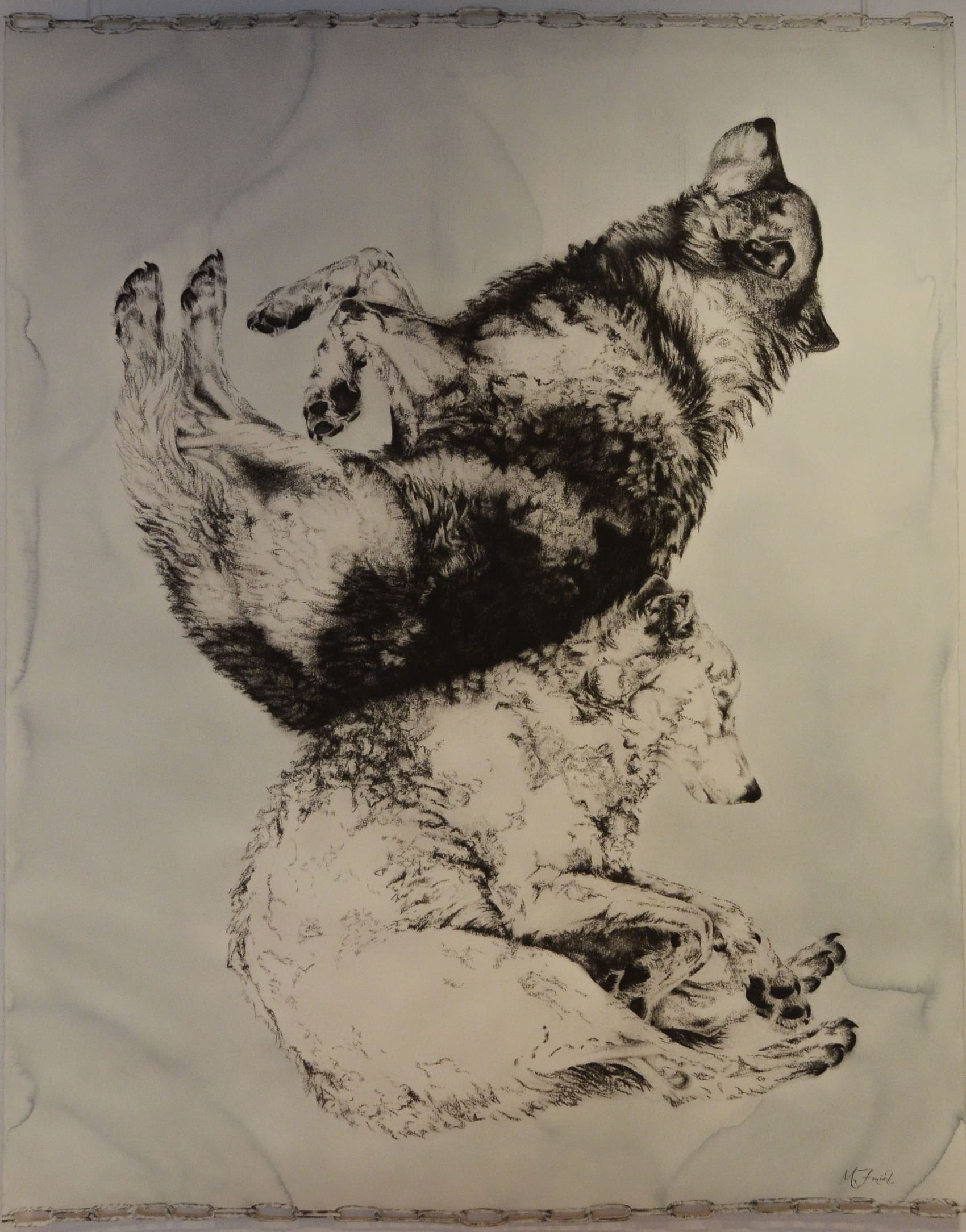 Like so many others (millions of readers over the past 126 years) I first connected with Seton in an emotional way after reading the Lobo story (which shows up on this web site in the Lobo, Wolves, and Wildlife Conservation section) in Wild Animals I Have Known. Less well known, but more interesting than the account of non-wolves Romeo and Juliet, the dedication of Lobo to his mate is both tragic and wonderful. Among those inspired by the story is Meredith Feniak whose large-scale drawing of the two wolves shows them reunited at the end of the story. It can be seen in the Academy’s Seton Gallery during our 2019-2020 show.

Begun as a preparatory sketch for a site-specific installation in a Denver house that was set for demolition, “Restoring Order” quickly became a piece on its own merits as it pulled on the heartstrings of everyone who visited my studio and learned Seton’s story of Lobo and Blanca and how the two changed the course of Seton’s life and contributed to a change in American values.

I was trained in botanical illustration, a specialized form of scientific illustration known for its precision and accuracy resulting from extensive preparatory research. Completed in charcoal, an untraditional media for scientific illustration, the process involved in the making of this drawing followed almost all other aspects in the traditional process – a process Seton also followed. Photographs, artifacts, and Seton’s writing provided primary source information to draw this life-size, scientifically accurate portrait of Lobo and Blanca. After my own dog’s anatomy proved too different from a wolf’s, I contacted the world-renowned wolf expert Doug Smith for his assistance. Smith graciously provided a high-resolution image of Yellowstone’s Druid pack, taken in the winter of 2007 from a helicopter. Some necessary tweaks were made to proportions, facial structures, and fur patterns, but nevertheless two of the napping wolves were the perfect photographic reference models of the distinctive Canis lupus anatomy.

“Restoring Order” reunites Lobo and Blanca, whether the viewer decides it is on a snowy valley in the sanctuary of Yellowstone, the heavens, or as Seton placed their lifeless bodies in a shed in New Mexico’s Currumpaw Valley. The piece is also a reflection on an ongoing conundrum: how can we restore ecological order to the American West, which now includes a disproportionate human population?

Ernest Thompson Seton and Our Last View of Lobo and Blanca

I took the chain from his neck, a cowboy helped me to carry him to the shed where lay the remains of Blanca, and as we laid him beside her, the cattle-man exclaimed: “There, you would come to her, now you are together again.” (Wild Animals I Have Known, pg. 54, 1898)