James B. Pond Writes About Seton 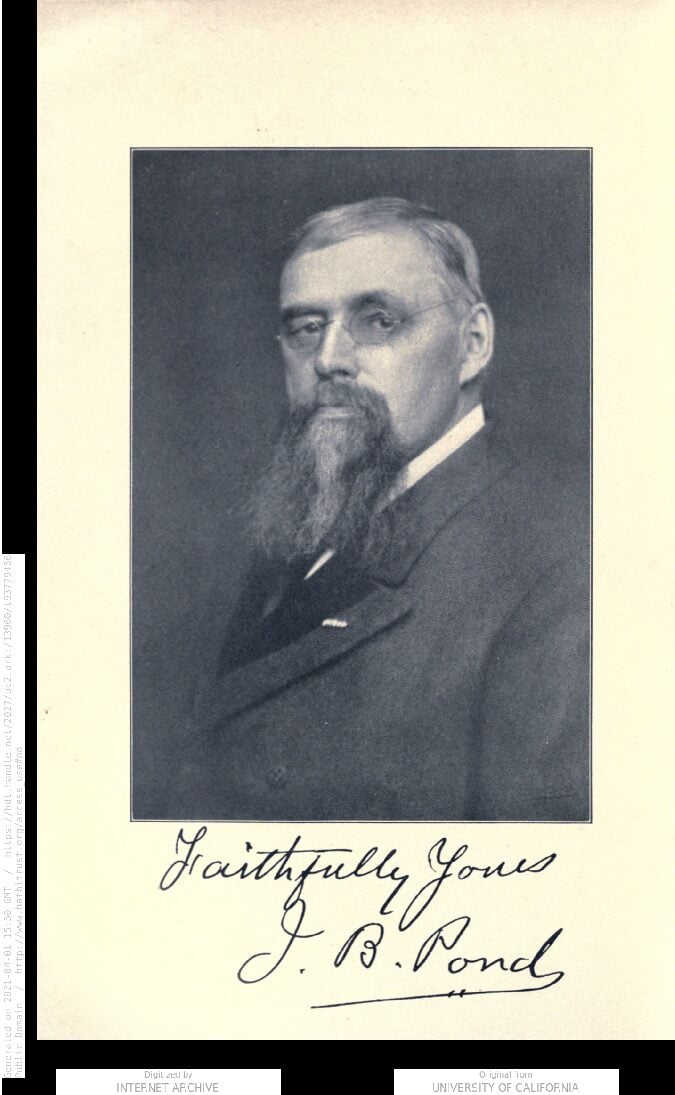 Author photo from Eccentricities of genius

Lecture organizer James B. Pond (1838-1903) propelled Ernest Thompson Seton to great success in the “Lyceum business” in the year following the publication of Wild Animals I Have Known (1898). Pond represented Mark Twain and many other media stars of that era. I wrote about Seton and Pond elsewhere on this site.

In his book Eccentricities of genius, Memories of Famous Men and Women of the Platform and Stage (1901) Pond provides vignettes about his many clients—a who’s-who of the performing and literary world of his time. Pond’s essay about Seton is long by blog standards but important as an account of how Seton was received by audiences of that time—for a while he was the most popular lecturer in the country.

This book is in the Public Domain; digital versions available from the HathiTrust Digital Library. This section is from pages 515-518.

ERNEST SETON-THOMPSON is a practical demonstration of what I have ever declared: that there always has been and always will be someone coining to the front whom the general public wants to see and hear. That somebody must do something good enough to attract general attention and render an equivalent return for what the patrons will give.

The name of Seton -Thompson had been on my list for a season. He frequently called at my office and gave me newspaper notices, and told me of the pleasant things that had been said to him where he had given lectures for small lyceums at a moderate fee. He presented me with a copy of his book, “Wild Animals I have Known,” which interested me immensely, and I was satisfied that he was not lecturing or reading for revenue only, but that he had a cause, was fond of animals, that his life had been associated with them, and that he showed clearly that every living creature had paternal and family instincts the same as human beings.

I asked him if he would give a lecture in Jersey City, near my home, so that I could hear it, which he consented to do. I then discovered that he was certainly a big attraction. I had booked him with a kindergarten society of New York for a lecture at Carnegie Lyceum, which I attended. Although I went early, I found the box office crowded with women and children trying to secure admission; but the man in the office had no more tickets to sell. The young lady who had charge of the affair came to me in great tribulation; there were a lot of people who wished to get in, and all the tickets she had put out among her friends had been sold and she didn’t know what to do. I hurried to the box office and asked the ticket agent to sell the people something that would admit them to the place, charging a dollar each, and I told the young lady to let everybody in and secure all the money she could. The result was about $16O more than the original sale of tickets that had been counted upon.

Then I suggested to Ernest Seton-Thompson that he and I give lectures in partnership in that hall as often as we could. I secured a number of dates, I think eight in all, the first one being one week from the afternoon just mentioned. I went to Carnegie Lyceum that afternoon and found every seat had been sold. The profits of the lecture were over $500. I asked Mr. Thompson if that wasn’t the largest day’s work he had ever done. He seemed very much flattered, and acknowledged that it was. We went from there to Boston, Philadelphia, “Washington, and Baltimore, giving afternoon and evening entertainments.

The matinees were arranged so as to take place after school hours, generally from 4 :30 to 5. These were invariably the largest attended. It was surprising to find the number of children who had read Mr. Seton-Thompson’s book and how familiar they all were with the names of Lobo, Wahb, Mollie Cottontail, Blanca, Silver Spot, Vixen and Tip, The Wild Mustang, and especially Little Johnny. The appearance of any one of them on the screen was the signal for shouts of laughter from the children. Lobo and Little Johnny seemed to please them the most.

No man has risen more rapidly in public favor than Mr. Seton-Thompson, as regards both his writings and his lecturing. At the present time there are more engagements booked for him at high prices than for any other platform attraction in the country.

Hunting with a Camera

Mr. Seton-Thompson demonstrated that the hunting of wild animals with a camera, instead of with a rifle to destroy their lives, is fully as enjoyable, and possesses much more satisfactory final results. He has also taught us that the animals instinctively avoid man because they are being hunted for their lives; but in communities where the shooting of animals is prohibited, the creatures become tame and almost sociable. In the Yellowstone Park, where no firing is allowed or has been for years, the bears and the wolves, the cattle and the horses, and the children, mingle together undisturbed, and children, colts, wolves, and lambs are as safe as though in their natural homes.

Mr. Seton-Thompson is a delightful man personally. Children have no hesitancy in approaching him or writing to him. He has received thousands of letters from children in all parts of the land telling him how they have enjoyed his books, and of the animals they have known that he must have heard of, or he could not have given their characters so graphically. The most interesting reading that I have found for a long time is among Mr. Seton Thompson’s letters from children. Here is one:

“’Wild Animals I have Known’ is the best and truest book I know. I have read it twice, each time feeling its trueness more and more. In the simple way the book is written it helps you to understand the delicate and finer parts of animal and bird life.

“The book appeals to you because it is true and just in all it says. I think it keen in detail, liberal and fair to every creature in it, beautiful in its style. The style that fascinates you yet not a novelist’s fascination. Original in every way and no quoting or phrases of other men, but just the Author’s own original and simple words, and on the whole it is a fine book that couldn’t be matched in beauty and style. The Author must lead a beautiful life in the woods and on the plains and in animals resting places, feeling at home with them and learning their ways, and I guess we all thank him for his toil and labor to compleat [sic] such a fine book. I like the Pacing Mustang and his glorious gate, as everlasting as steel. Bingo and lots of other stories. The Don Valley Partridge in which Mr. Thompson speaks of the cruel hunter who hunted Redruff. I had a simeler [sic] experience but not a brutal one for it turned out all right. My Uncle, a boy friend of mine, and myself with our rifels [sic] and a pistol, (we were with a party of others going for a ducking in Eel river) we three were ahead, and just as we turned a curve we saw a Father quail with six or seven young ones, we were all seized with an impulse to shoot him although it was out of season. I shot between his toes, then my uncle shot and it kept it hot. I shot twice again but all the time my friend was shooting and the dust was flying, there the quails stood untouched, and unmoved he waited till all the young were hid and then he hid himself. It was about five minutes that we had been shooting. I stopped and thought of Mr. Thompson’s book. I tried to stop the others, and I did. When we left the spot there was one boy ashamed of his shooting, a man glad he dident [sic] kill the quaile, [sic] but ashamed of his shooting, and last of all I with a wreath of happiness round my head and glad I didn’t kill the biped. Mr. Thompson saved his life (The quail’s) by writing that fine book of his, and he made me happy the rest of the day, and put the cruel hunting spirite [sic] out of my head.

It is surprising to learn, within two or three months after Mr. Seton-Thompson’s success, how many people have been interested in the same way, and are ready to make sacrifices by writing books and lecturing on wild animals.

He is a benefactor and has a cause. Fame and fortune are assured to him, which he justly deserves.

At present writing Mr. Seton-Thompson is speaking twice a day in order to comply with the demand for his services. Everywhere crowded houses welcome him, and always on afternoon occasions the greater portion of the audience is com- posed of children. The whole human family is his public, because every human being loves wild animals; the rich and the poor, the learned and the unlearned, are alike interested and enthusiastic auditors.

All of Mr. Seton-Thompson’s writings and drawings descriptive of the personality of wild animals are enhanced many fold by his inimitable description of them from his own lips. It is seldom that an author-artist is gifted with the ability to entertain upon the lecture platform, but Mr. Ernest Seton-Thompson is as clever with his voice as with his pen and pencil.