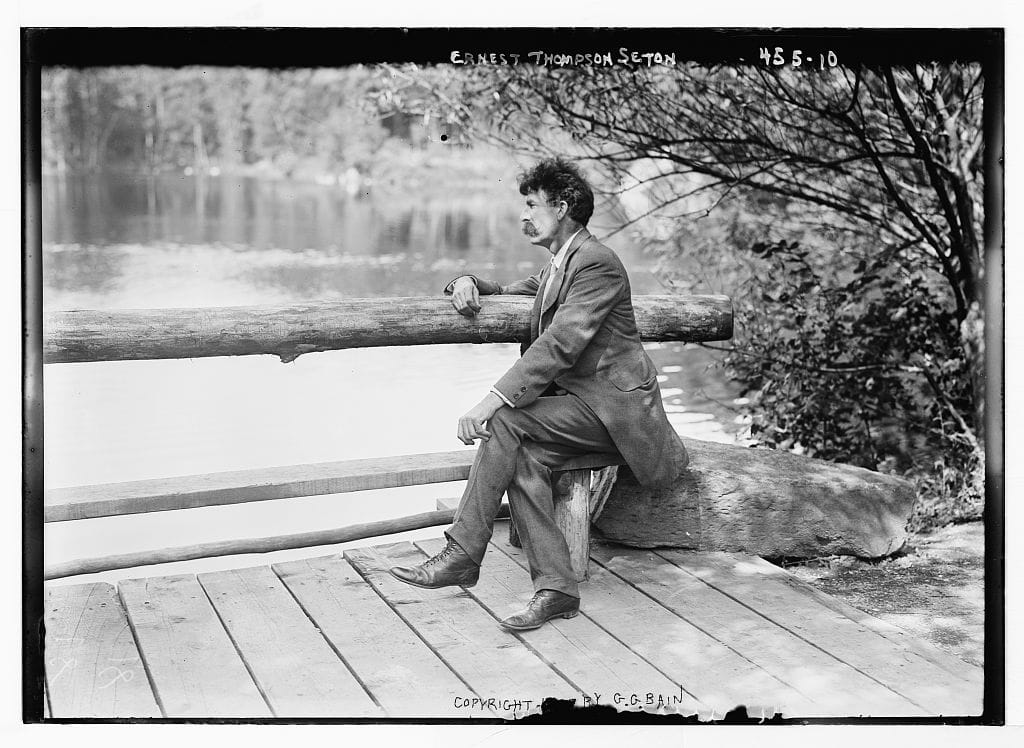 Here is another find from the Seton archives at the Academy for the Love of Learning—an account by William W. Edel (1894—1996) of the first Boy Scouts of America camp which took place at Silver Bay, New York at the end of August 1910.* Organized by the Y.M.C.A., the camp was an experiment for the nascent BSA and an early competition between the very different approaches to Woodcraft by Seton and Dan Beard, who were both in attendance.

Mr. Edel must have been an interesting character as well. He held a J.U.D. degree (in civil and canon law in the Catholic church) and served as a chaplain in the U.S. Navy for thirty years from World War I through World War II. After the wars, he served as president of Dickinson College in Carlisle, Pennsylvania.

Edel’s remembrance of Seton, dated January 17, 1995, was in the form of a letter to a history scholar, Dr. D… The following is a quote from that letter:

My story with its headline “First Camp, an Old Scout Remembers” was written by me in 1979 when I submitted it to a number of publications only to have it returned as being “too long.” I suppose that I really did write more than most publications wished to use.

My story does not really need any addition but I will write a few things that I did not cover fully at first.

I wish that I might describe Ernest Thompson Seton in a way that he appeared when he was the first Scout, to me he seemed almost to be more than human, his attitudes, his comments, his teaching of woodcraft and campcraft and related things were done with an ease and kindly presence that showed him as perfectly equipped for the job he had. He never failed, no matter what question was put to him he always had the right answer at the right time.

I think I ought to tell you a little more about the “dog soldiers.” They were selected from the leaders of the various delegations by Ernest Thompson Seton and other leaders. The Baltimore delegation had a leader whose name I cannot remember, who came with us expecting to remain in his position during the entire encampment, but without saying anything to any of the boys in his group, he left on the third day and never returned. The result was that I was selected to take his place, largely because I had YMCA camp experience for three years, which no others in my group had. As a result of my taking responsibility as leader of the Baltimore delegation it fell to my being listed among the “dog soldiers.” With a little instruction from Seton himself I soon learned to take this semi-official place. On the day when I served as “dog soldier” I wore a red headband with one feather which I believe was worn also in Seton’s Young Indians, of which I have [sic] been a member only by mail. It was the duty of the dog-soldier to be alert from the end of one Council fire to the beginning of the next one. There were always two dog-soldiers whose duty it was to see that all the rules of the camp were observed. In my “First Camp” I give a general idea of the rules which the dog-soldiers had to administer. Their authority came directly from Ernest Thompson Seton.

I do not believe there were many campers who were younger than I was and since I am now one hundred years old plus six months, I think it is extremely unlikely that there are any other persons living today who camped at Silver Bay in 1910. If any still exist I would be glad to know who they are and their address and telephone number. If it is your judgment that I am the only survivor of the first camp I trust you will depict me as such . My birthday was the 16th of March 1894 and by the time you have carried your plans into completion I will be a few months more that [sic] 101.

My book entitled “MY Hundred Years” was published on the day that I reached by 100th birthday and for your information I am sending you a copy of the book.

* The YMCA’s Edgar M. Robinson, a strong Seton ally, was in charge of BSA at this time.