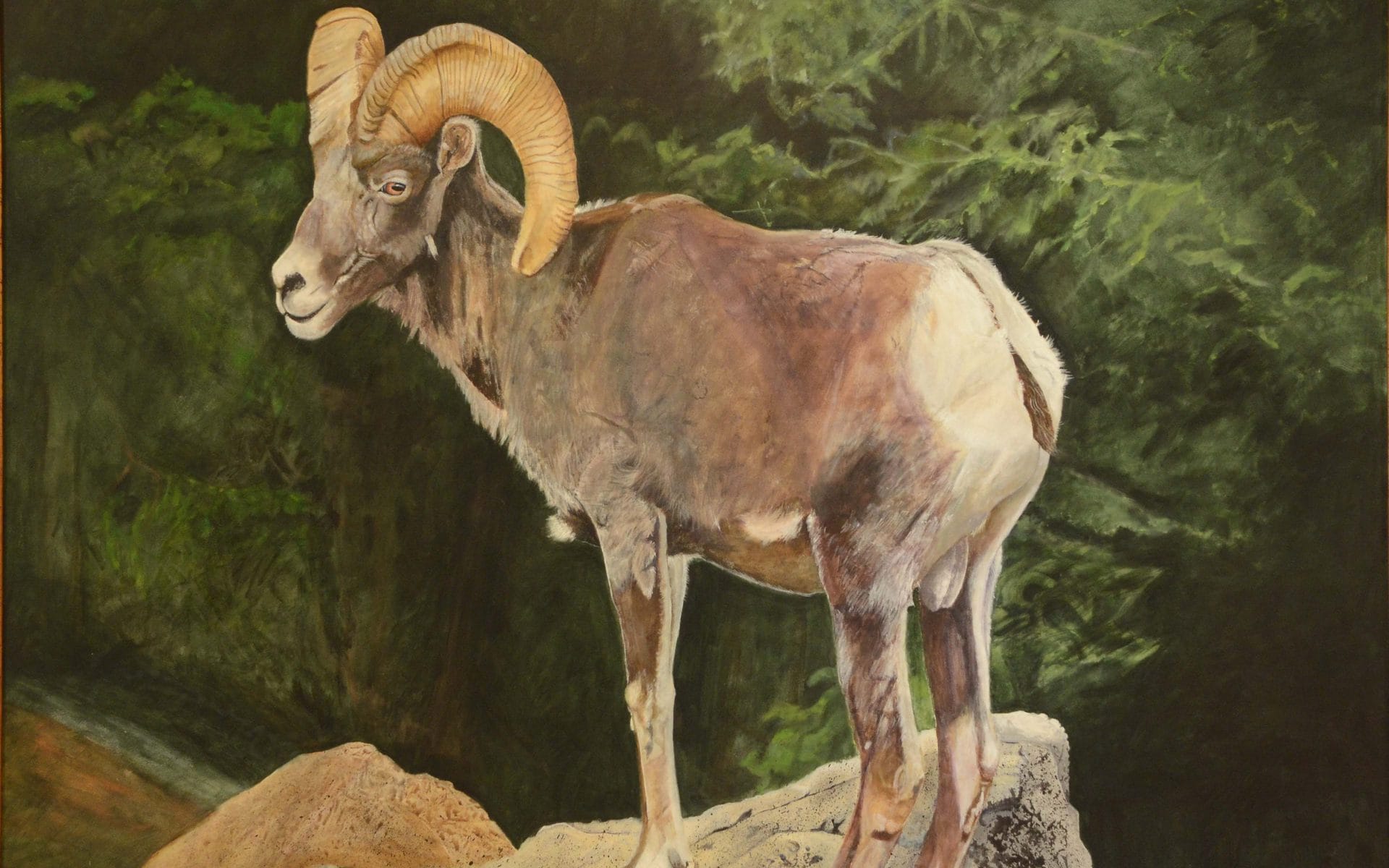 A few years ago, the Santa Fe artist Ellie Fuller happened to stop by my office at the Academy for the Love of Learning. We talked about our respective nature experiences including an interest in Bighorn Sheep. These animals once nearly disappeared from New Mexico but have made a comeback in recent years. They are often seen around the famous “High Bridge” along Highway 64 in New Mexico as well as in places such as Colorado’s Rocky Mountain National Park.

The wonderful ram shown in Ellie’s very large painting (shown above, Acrylic, 2012) is based in part on a photograph I took in the Pecos Wilderness during an exploration of the Truchas mountain range in 2010. I sent her a copy of the image never suspecting that years later I would end up showing this same work in a Seton Gallery exhibition.

A second painting by Ellie, of a Jaguar (Acrylic, 2014), is also on display. (Click on the image to see a larger version.) Both works include trees, a favorite subject that often show up as background or as the featured subjects of her paintings. (Copyright to Bighorn and Jaguar, Ellen Fuller.)

Tucked away under the protecting shadow of each rugged base, like things too precious to expose, were his beautiful eyes. Dark brown when he was a lamb, yellowish brown when a yearling, they were now, in his early prime, great orbs of shining gold, or splendid amber jewels, with a  long, dark, misty depth in each, through which the whole bright world was born and mirrored on this brain. (Lives of the Hunted, pg. 60, 1901)

The Jaguar is an animal of the well-watered dense forests in the tropical or subtropical parts of the Western World; and its distribution within these limits depends on the local food supply and proximity of the region to its centre of abundance. The Jaguar prefers the impenetrable thickets along river bottoms where the Whitetail Deer and smaller game find harbour. Possibly it is not straining a point if we claim that the Jaguar’s spotted coat reflects this fact, for it looks like broken sunlight falling through foliage on a log or bump. According to many authorities, they readily climb and travel about in the roof trees of the forest whenever it may serve their passing whim to do so. (Lives of Game Animals, Vol. 1, pg. 16, 1925)