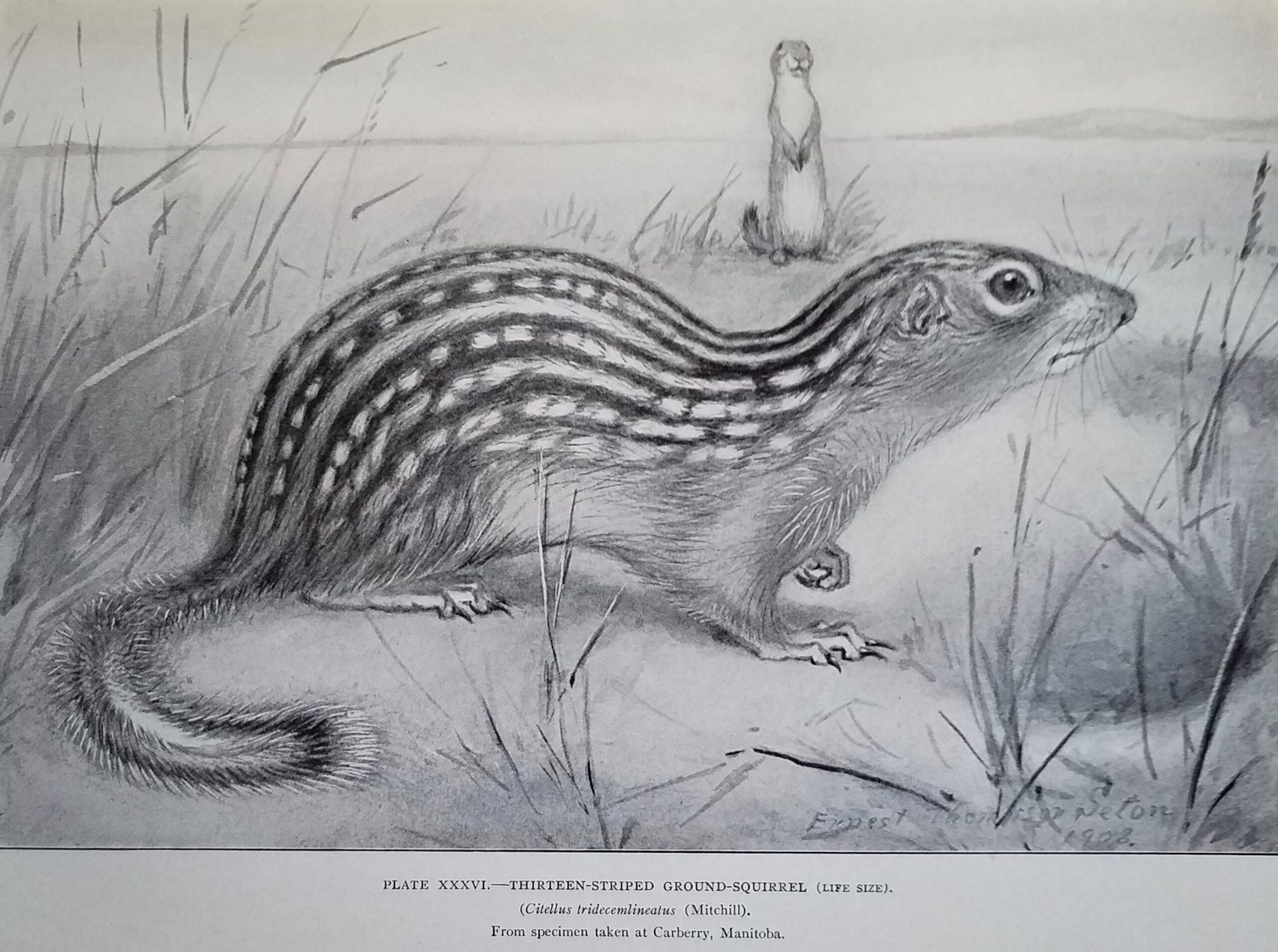 (Pg. 402) If you find a Striped-gopher sitting by its burrow and walk straight toward it, it waits until you are within perhaps ten feet, then dives with a little defiant “chirrup” into its under ground safety. If you walk so far as to pass within eight or ten feet and do not look at it, it seems to watch your eye and remains perfectly still while you pass. If you step or turn toward it, it dives at once. The Yellow Ground-squirrel, on the other hand, no matter how approached, always runs into its hole with nervous haste, as soon as it sees a foe anywhere near.

If a Striped Ground-squirrel on the prairie be followed, not too fast, it will play with the observer, leading him about in various directions, without seeking a hole. I remember once (July 16, 1892) following one for a hundred yards or more in a very crooked course, then, so far from hieing earthward at last, it took to a field of standing wheat and eluded me in that, giving the usual chuckle of defiance as it disappeared.

If, however, it be hotly pursued, it makes for its earth works shelter. The faint signs of runways that we see in the grass are no doubt very big, plain fingerboards to it — the Gopher who runs may read them. Its course, though erratic to us, is always directed accurately by these road blazes to a haven, and when at length it stops and looks at the pursuer he may be sure that it is now at the door of its den, and on a nearer approach will dive with the usual twitter of derision.

(Pg. 403) This animal has a habit of sitting bolt upright on a mound; it makes itself as tall as possible to look around; its paws are pressed in close to its breast, and at a distance it looks like a picket – pin or a stake driven into the ground. At such times the uninitiated often take the Squirrel for a surveyor’s land mark until a nearer approach causes the supposed stake to dive into the mound.

(Pg. 404) Belonging to an order of herbivores, we expect to find this animal eating all things that grow above and below the ground grass, herbage, seeds, berries, roots, and grain; but the creature is quite omnivorous and habitually includes all garbage as well as herbage in its diet. I have known it to eat greasy house scraps at which a Rabbit would have wabbled its nose in holy horror, as well as offal, insects, feathers, raw meat, small birds, mice, and its fallen comrades.

(Pg. 409) So far as known, however, it never drinks. As with many small rodents, the moisture of the vegetable food is sufficient for its needs, so that the story of the well or burrow running down to water is a myth. I kept a number of the Ground-squirrels of both kinds in a cage all summer, but they never paid any attention to the water supplied them, so we ceased providing it. A very hot spell continued for a week, and it was suggested that the Ground-squirrels might now enjoy a drink. A saucerful was put in. Four would not touch it, two sniffed at it, wetting their whiskers slightly, then licked the whiskers dry, but could scarcely be said to have drunk.

(Pg. 409) this animal is the accepted prey of all creatures, great and small, which prey. As Dr. Coues has pointed out in good set zoological terms, the proper function of the whole order Rodentia is to turn grass into meat for the sustenance of their betters. I have taken Striped-gophers from each and all of the large Hawks which nest in our Province.

Among the quadrupeds the Badger chiefly makes a special study of Ground-squirrel as diet. I have in many places seen the shelter burrows ripped open for twenty or thirty yards, showing where the Badger pursued the Squirrel by demolishing its rooftree, and usually there was some evidence to show that he had been successful.