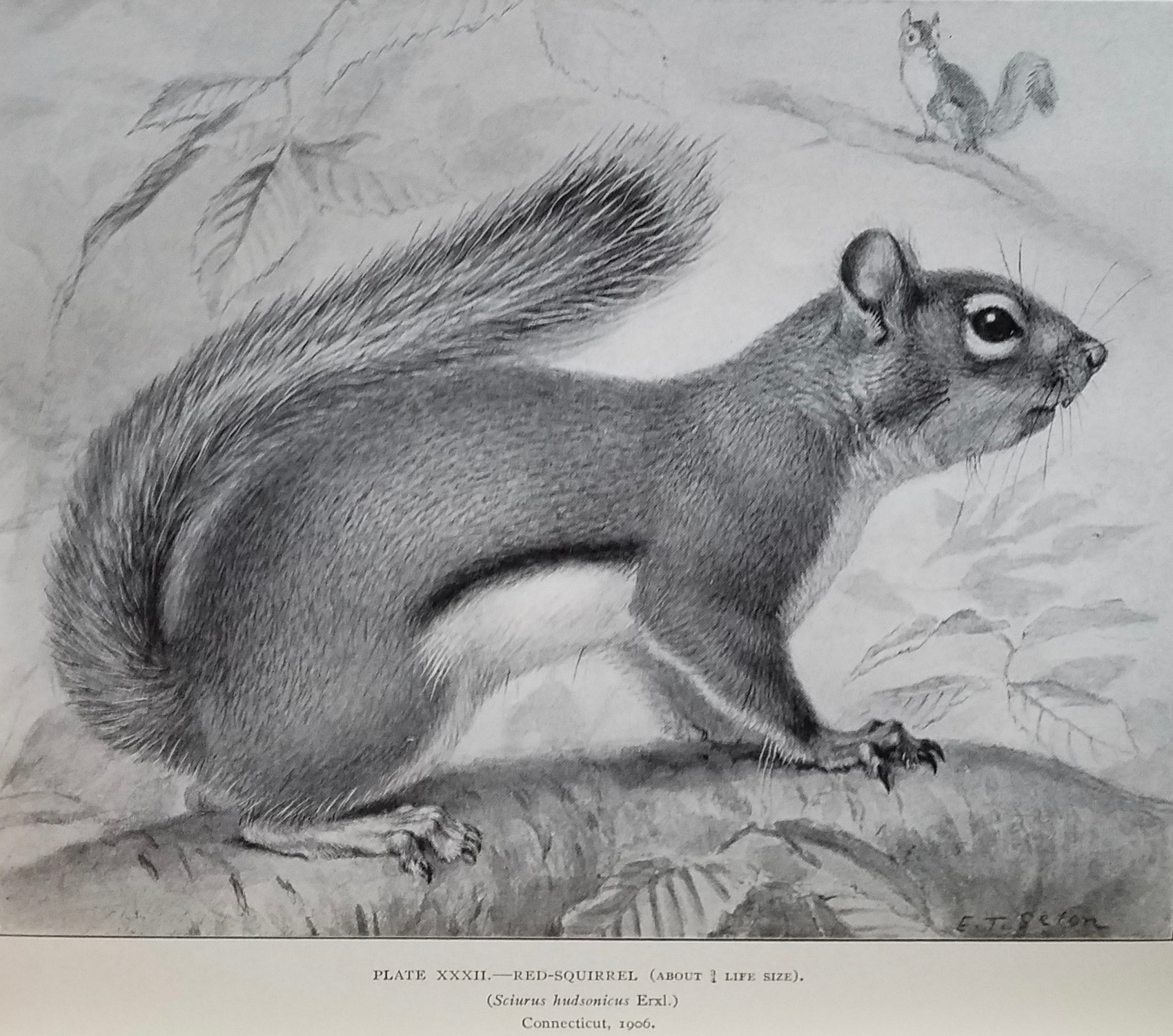 (Pg. 312) Red-squirrels will play together, chasing each other among the trees, but I never saw two of them unite to defeat an enemy or to undertake some work too heavy for single effort. One may give the alarm call on finding a lurking foe, but it seems to utter it as a menace to the foe not as a warning to its friends. I have, I believe, seen both parents (near Toronto) gathering cedar bark for the nest; and, of course, the young are often seen in late summer following the mother, but these two cases, being family affairs, do not prove true sociability. Sociable animals do things which are of no direct benefit to themselves, but helpful to others of their species, exclusive of their young and mates. In this highest sense according to present evidence the Red-squirrel, though slightly gregarious, is not sociable.

(Pg. 313) I have no conclusive evidence to show whether the sexes truly pair or simply consort for the time being. I have, how ever, seen two adults at work building a nest, and this is strong evidence, since it is the rule for the male among polygamous animals to shirk all family responsibilities.

On the afternoon of July 19, 1905, at Cos Cob, Conn., I heard a continuous whining churr-churr from a Red-squirrel in the trees under the window, and I saw, about ten feet off, a small Red male with very red tail and black side stripes, trying by personal violence to possess a large dull-coloured female. She “churred,” struggled, and scrambled from bough to bough for several minutes, but he kept his hold. At length she uttered the loud call chatter. An answer came from a hemlock some fifty yards away; another large Squirrel rushed in and put the small villain to flight.

I consider this incident important, as it showed first, sexual feeling outside the true breeding season; next that the third Squirrel (almost surely a male) still felt a band of attachment for this female; which argues in favour of permanent mating.

I was further led to ask, Does not fear imply the possession of imagination?

(Pg. 315) During boyhood days near Lindsay, Ontario, I once felled a dead hollow tree in which was a Red – squirrel’s nest. The mother and one of the young were killed by the fall, but the remaining five little ones, still blind and furless, though now late in June, were taken to the old cat with the idea that she would give them a merciful end, and turn them to account.

But the cat had very young kittens at the time, her heart was tender, and she received the orphans kindly. She suckled them with her own brood for some days. They died one by one, but it was not the fault of cat or kittens. So far as we could see her behaviour towards them throughout was of the gentlest and most motherly description.

(Pg. 325) It is well known that once a cow, sheep, or dog has licked its own little foundling, the feeling of kinship and possession is established. Maybe human kissing had a cognate origin.

(Pg. 336) Should we preserve the Red-squirrels in view of the fact that they destroy a certain amount of grain, fruit, and song-birds every year? These are serious charges, and I cannot refute them in detail; but I know that my grounds abound now, as they have for years, with grain, fruit, song-birds, and Red-squirrels, showing that these are not incompatible. They are near some sort of balance. It may prove a wise thing to keep the Chickaree numbers down since their natural foe, the Marten, is gone from New England, but I am far from joining with those who would welcome its extinction. Indeed, I should woefully miss the noisy little rascals if I did not see them at their daily play, and I hope that the Red-squirrels will frequent my grounds at least as long as I do.