The Pronghorn by Ernest Thompson Seton 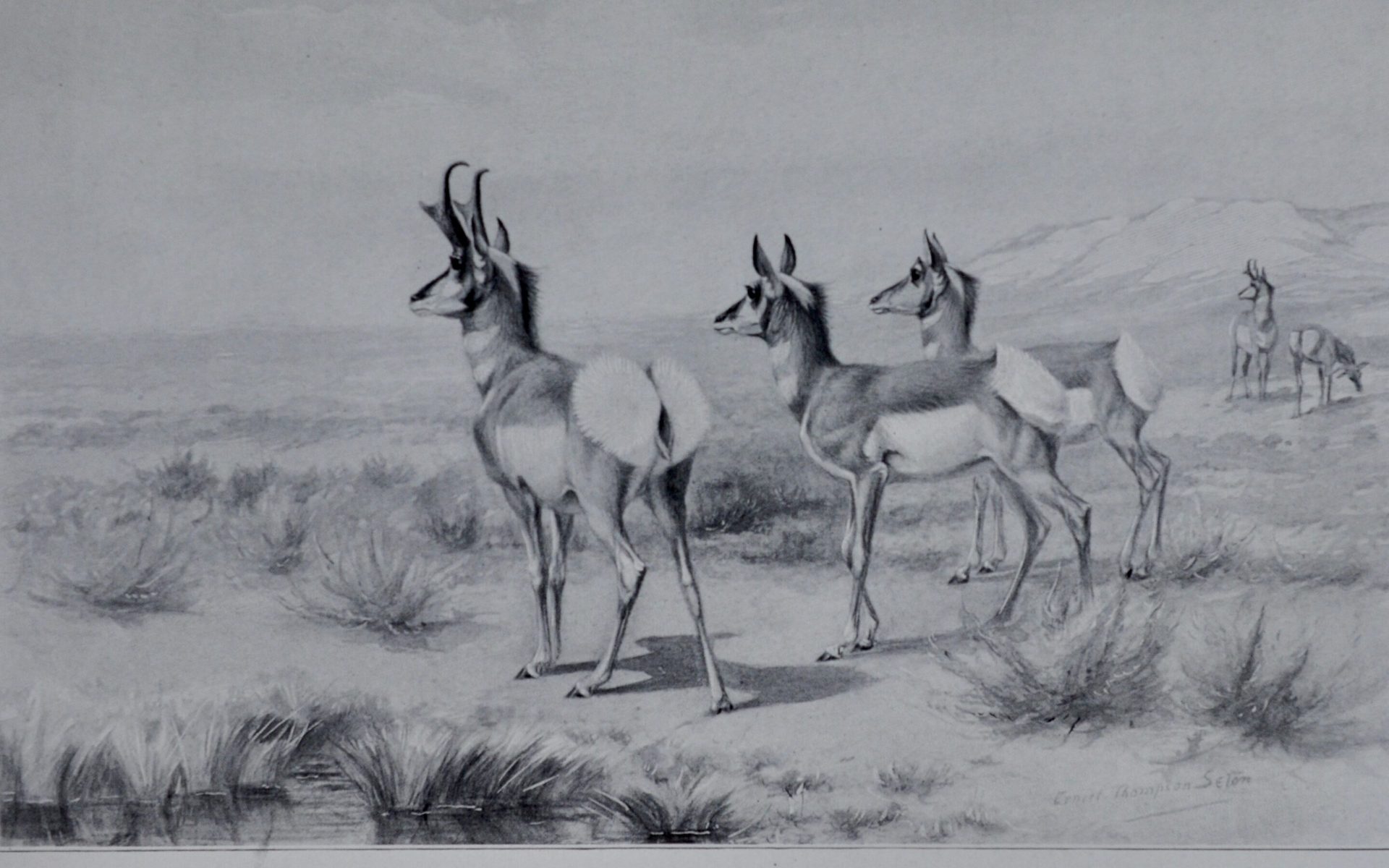 (Pg. 219) During early days in New Mexico (about 1892) we could usually reckon on seeing a band of a dozen or 20 Antelope on the open plains every 10 miles or so during the fall. The region that I knew, and rode in daily, was some 60 miles long by 5 wide. In this were 5 well-known bands of Antelope, each keeping its own home locality and each numbering about 20. This would give 100 Antelope to 300 square miles. But all the “old – timers” agreed [ca. 1909] that there were no Antelope in the country now. “Just an odd one here and there, and nothing to compare with the herds of the days gone by,” they said.

(Pg. 221) It is fortunate that the nation has awakened to the fact that game is worth preserving, and that a national effort is needed to preserve it. All the States now have game laws for the protection of Antelope. Some of them have even declared a close season for a term of years. It is probable, therefore, that we may yet keep the Pronghorn from going the way of the wild pigeon and the Buffalo.

(Pg. 224) Another remarkable detail of the Antelope’s anatomy is the white area on each buttock. This seems at first like the rest of his spots—a mere patch of white coat; but it is found to be specialized for an important service. It is composed of hair graded from short in the centre, to long at the front edges. Under the skin of the part is a circular muscle by means of which the hair can, in a moment, be raised and spread radially into two great blooming twin chrysanthemums, more or less flattened at the centre. When this is done in the bright sunlight they shine like tin pans, giving flashes of light that can be seen farther than the animal itself, affording a conspicuous identification mark that must be of great service to the species.

Many years ago, while riding across the upland prairies of the Yellowstone, I noticed certain white specks in the far distance. They showed and disappeared several times, and began moving southward. Then, in another direction, I discovered other white flecks, which also seemed to flash and dis appear. A glass showed them to be Antelope, but without wholly explaining the flashing or the moving, which ultimately united the two bands.

Coming To An Understanding

I made a note of the fact, but did not understand it until the opportunity came to study Antelope in the Washington Zoo. I had been quietly watching the grazing herd on the hillside for some time; in fact, I was sketching, which affords an admirable opportunity for watching animals a long time minutely. I was so quiet that they seemed to have forgotten me, when, contrary to rules, a dog chanced into the Park.

The wild Antelope has a habit of raising its head every few minutes while grazing, in order to keep a sharp lookout for danger, and these captives maintained the tradition of their race. The first that did so saw the dog. It uttered no sound, but gazed at the wolfish-looking intruder, and all the long white hairs of the rump-patch were raised with a jerk that made the patch flash in the sun. Each grazing Antelope saw the flash, repeated it instantly, and raised his head to gaze in the direction where the first was looking. At the same time I noticed on the wind a peculiar musky smell—a smell that certainly came from the Antelope—and was no doubt an additional warning.

(Pg. 226) Observations on captive animals have thus afforded the key to those made on the Plains. I know now that the flashing flecks seen on the Yellowstone uplands were the interchanging signals of the two bands, the smaller of which, on getting the musky message, “Friends, ” had laid aside their fears and joined their kindred. This, it will be seen, is simply a heliograph. Man flatters himself that he was the first inventor of flash communication, but he is wrong—the Antelope used it thousands of generations before it was dreamed of by mankind.

Battle Of The Pronghorn

(Pg. 244) I recall a scene, the sequel of an Antelope duel on the Big horn Basin many years ago, in which evidently the defeated buck took the most serious possible view of the situation. It was in the October of 1898. I was riding across the Bighorn Basin (Wyoming) with Mrs. Seton and A. A. Anderson, when we noticed near the horizon some bright white specks. They were moving about, appearing and disappearing. Then two of them seemed to dart erratically over the plain, keeping always an equal distance apart.

Soon these left the others and careered about like twin meteors, this way and that, then our way; at first in changing line, but later directly toward us. Their wonderful speed soon ate up the intervening mile or two, and we now saw clearly that they were Antelope, one in pursuit of the other. High over their heads a golden eagle was sailing.

On they came. The half mile shrank to a couple of hundred yards, and we saw that they were bucks—the hind one the larger—dashing straight toward us. As they yet neared we could see the smaller one making desperate efforts to avoid the savage lunges of the big one’s horns, and barely maintaining the scant six feet that were between him and his foe.

We reined up to watch, for it now was clear that the smaller buck had been defeated in battle, and was trying to save his life by flight. But his heaving flanks and gaping, dribbling mouth showed that he could not hold out much longer. Straight on he came toward us, the deadliest foes of his race, the ones he fears the most.

How The Pronghorn Saved Himself

He was clearly between two deaths—which should he choose? He seemed not to hesitate—the 200 yards shrank to 100, the 100 to 50—then the pursuer slacked his speed, seeing that it would be folly to come farther. The fugitive kept on until he dashed right in among our startled horses. The eagle alighted on a rock 200 yards away.

The victorious buck veered off, shaking his sharp, black horns, and circling at a safe distance around our cavalcade to intercept his victim when he should come out the other side. But the victim did not come out.

He felt that he was saved, and he stayed with us. The other buck, seeing that he was balked, gave up the attempt, and turning back, sailed across the plain, till he became a white speck that rejoined the other specks—no doubt the does that had caused the duel.

The vanquished buck with us stood for a time panting, lolling his tongue, and showing every sign of dire distress. It would have been easy to lasso him, but none of us had any desire to do him harm. In a very short time he regained his wind, and having seen his foe away to a safe distance, he left our company and went off in the opposite direction. The eagle realizing now that there would be no pickings for him, rose in haste and soared to a safe distance.

This incident suggests a number of psychological problems which will be hard to solve if we accept certain old-time theories of animal creation, but which will solve themselves if we admit the Antelope to be a fellow-creature, with feelings somewhat akin to our own. Had one of us been in the place of the vanquished buck, we should probably have done just as he did.