The Moose by Seton 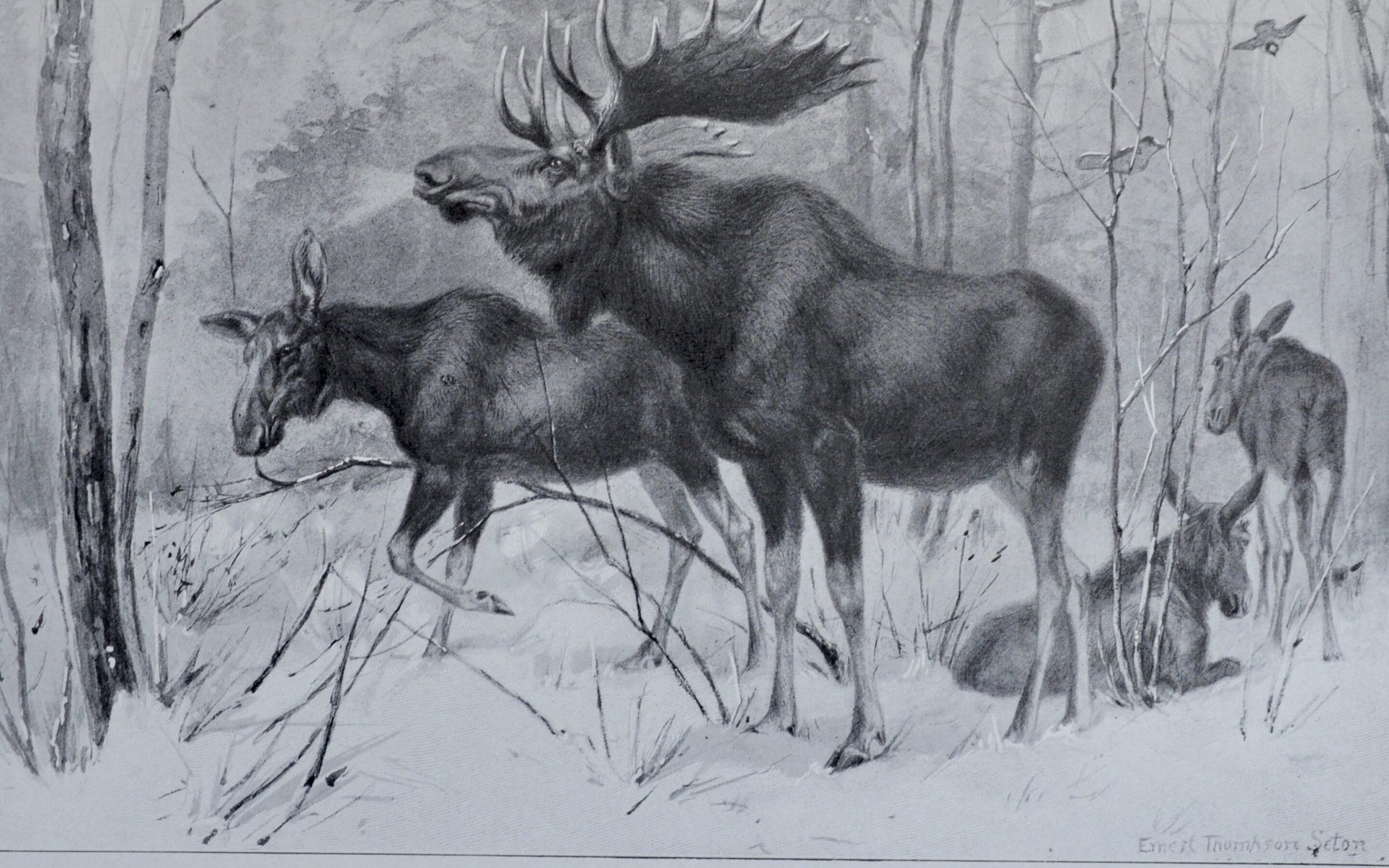 (Pg. 153) No wild animal roams at random. All have a certain Home range that they consider home. Some have two of these, one for summer, the other for winter, and these are called migratory animals. The Moose has but one home, and that it keeps to the year round. As a general rule the extent of an animals range corresponds somewhat with its size. A Deer range is larger than that of a Rabbit because its wants are greater. Flesh-eaters are of course on a different basis. The Moose appears to be the widest ranger of the non-migratory ruminants.

The Carberry Swamp was the home of a small band of Moose that never left its limits at any time, so far as I could learn, though it was but three miles wide by ten long. The Moose that inhabit the east slopes of the Teton Mountains in Jackson’s Hole, Wyoming, are known to continue all year in a narrow belt about three miles by ten on the east of Jackson’s Lake. In the Bitterroot Mountains a few individuals live in the narrow valleys on the west slope of the mountain, and though these valleys are rarely over half a mile wide, the Moose seem content to dwell permanently in a part of them that is not more than two or three miles long.

While the Wolf and Fox may greatly extend their home range in winter time, the Moose and some others seem to restrict themselves to a smaller locality then than in summer, no doubt on account of the difficulty of travelling in the snow.

In the winter, according to all testimony, the Moose is satisfied with so small a range that it is called the winter yard. This may be less even than 50 acres. Indeed. Having found a suitable place to yard, a family will stay there until the snow is gone, the food fails, or they are driven out by hunters. I should think that ordinarily a Moose, especially a cow, passes its life within 10 miles of the spot where it was born.

The Yarding of the Moose

(Pg. 165) The “yarding of the Moose ” is a familiar phrase that has given rise to several misconceptions. Many persons think that a Moose yard is a large place, having all the snow in it trampled down smooth, and surrounded by a straight wall of untrodden snow rising to the level of the deep soft covering of the forest beyond. They imagine, farther, that, as soon as a storm begins, the Moose gets to work, hoof and horn, to hammer the new snow down level and hard within the yard.

The fact is that, when the snow commences to deepen, a Moose family – father, mother, and little ones – seek out some place of abundant food, and, by winding daily in this, cover the ground with a network of pathways. The longer they stay, the more numerous and the wider the pathways become, so that, finally, there are but few untrodden spaces of twenty yards across.

The deeper the snow in the woods the harder the Moose must work for their food, since the lower bushes and ground herbs are not now available, and thus the difference between the snow in the yard and that in the woods increases. If the food is sufficiently abundant in the yard, and no hunters approach, the Moose stay till spring. If the food gives out, they must begin a perilous journey through the snow in search of another good place. It is only during such a journey that they fear the Wolves. They make it in single file, so that the young ones in the rear do not have a very hard time, and it is usually done with judgment founded on their memory of the country.

A Moose yard is commonly frequented throughout the winter by the moose – birds or Canada – jays (P. canadensis). I cannot guess why, unless the Moose, by tearing down and rooting up logs and dead trees, exposes worms, etc., or perhaps the parasitic insects in their hair furnish food for the bird. There are several other cases of small birds associating with large beasts, and in each the bird is believed to serve the beast as watchman and get his return in parasitic insects as food.

(Pg. 184) There is a curious side to animal nature, seen in most highly organized species and illustrated in the Moose by the following instances: The first was related by George Crawford, the well-known guide of Mattawa, as follows:

In March, 1888 while out with his partner to catch Moose for Dr. S. Webb, they came on a Moose calf track in the deep snow. There was no sign of a cow, so they turned their dog loose. Very soon they heard him barking and came up to the calf. It rushed toward them with bristling mane. His partner ran and Crawford got behind a tree.

The calf charged up to him and quickly wheeled to face the dog. It paid no heed to the man then, but when he turned homeward it followed for protection, crowding up close and watching the dog. At home he put a halter on it, and it allowed him to lead it quietly into the stable. It was shipped to Dr. Webb, and is now at large in the Adirondacks.

The following was related to me by Edouard Crête, of Deux Rivières: In late September, in 1893, a mail-carrier was starting from Bear Lake to Deux Rivières. Crête showed him a short cut over Brule Lake. Some hours later two men were out that way looking for axe handles, and heard the mail-carrier shouting for help. Instead of going to him they ran back to camp in great fear. Crête picked up a rifle and went with the foreman as fast as possible. They heard the mail-carrier as soon as they came within half a mile. When near enough he shouted, “A Moose has me up a tree.” They came close and saw it was a cow Moose. She would neither go away nor charge. Indeed, she paid little attention to the new comers. The foreman, Jean Basquin, walked up to within twenty yards and shot her.

The mail-carrier said that he came on the cow suddenly. She was alone, but came running toward him squealing. Her mane was up and she seemed to be threatening him. He had nothing but a hatchet, so he ran for a tree, and happened to find one leaning so much that he could walk up. She followed him within touching distance all the way, but did not strike at him. The tree at the highest point was only 10 feet up. Here the man sat, the Moose below. She could easily have struck him, but made no attempt to do so. There she stayed watching him; her mane bristled all the time. When she heard the other men coming she merely turned her head, but during the three hours she kept the man up that tree, she did not leave the spot for a moment.

After skinning her carcass a very unexpected condition was brought to light. Evidently she had been attacked by a bull Moose a few days before. The horns had pierced her left side in five places. Inflammation had begun and matter had formed in four places. She must have been suffering great pain, and would probably have died before long. They couldn’t make out why she should go to the man, but it is quite sure she wasn’t there to do him any harm, for she had every opportunity to do so and did not strike at him even once.

This instinct when in deep trouble or flying from great danger, to blindly trust another power that may not be friendly but certainly is superior — to seize on the one remaining hope is as deep-rooted as it is remarkable. We see signs of it throughout the animal creation, and the higher the species the more marked it is.