The Chipmunk by Ernest Thompson Seton 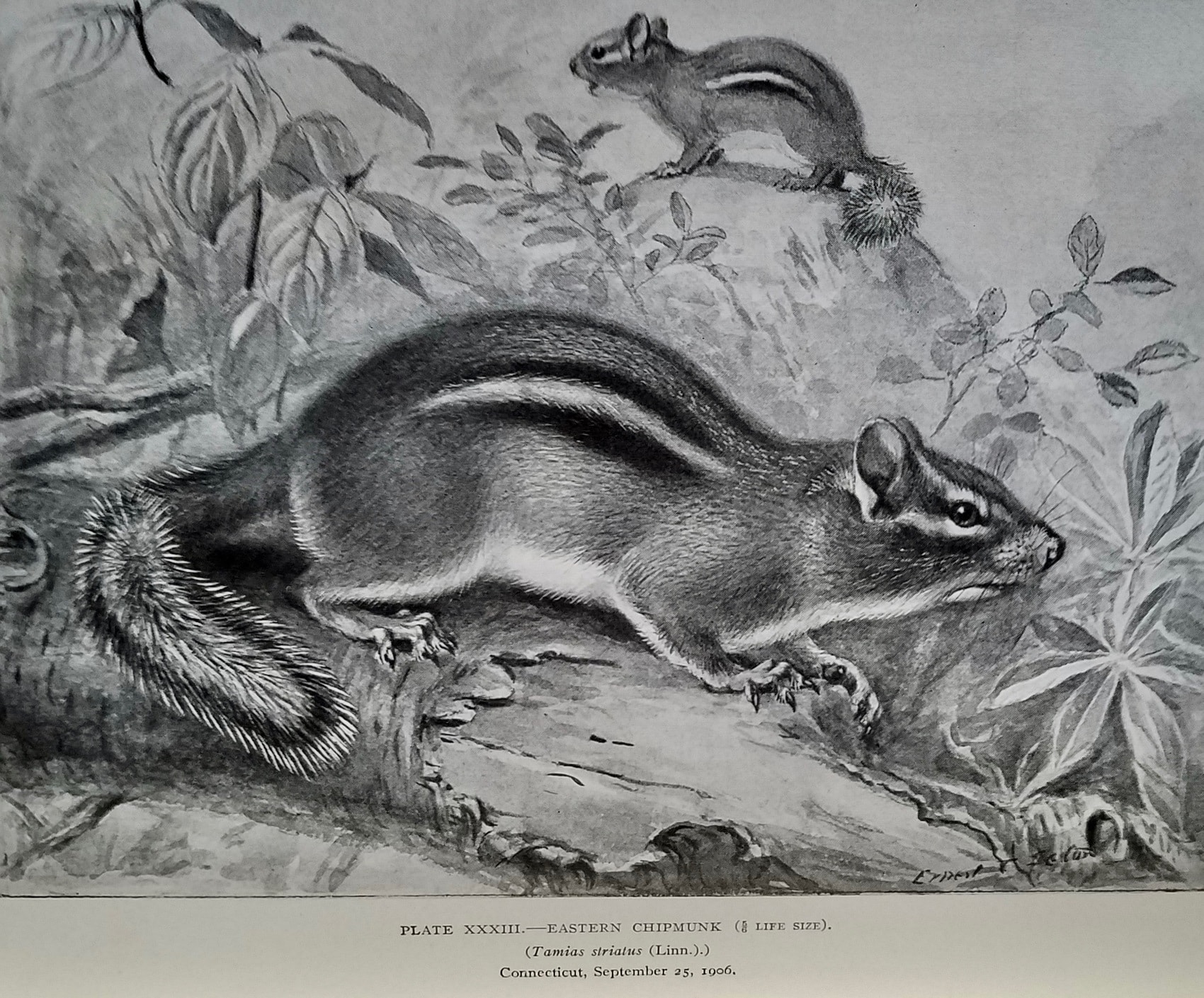 (Pg. 339) The home range of each individual is undoubtedly very small. On one occasion in late June, I followed two Chipmunks that left the hole nearly together and set out as though with an object. They traveled to a small knoll covered with oaks, some fifty paces away. At another time (June 15, 1905) I saw a Chipmunk make repeated journeys between a small grain storehouse and its den, about fifty yards away, down hill, through the woods. Both these cases were at Cos Cob, Conn.

In order to mark an individual Chipmunk for better observation in this regard, I caught a female that lived by our porch. Then I placed the cage-trap that held her in a bowl of deep blue-purple dye. The Chipmunk did not like it at first, and splashed in such vigorous protest that everything within three feet looked very blue. But she found it not so bad as it looked, and soon was sitting contentedly with only her head above the purple sea. To help her pass the time and evidence my good feeling, I offered some bread. This she accepted in a proper spirit and fell to eating, but held it so low that it was speedily dyed an intense purple, which, however, apparently detracted nothing from her relish.

When taken out and dried in the sun, her back colour was hardly changed, but her breast, throat, and feet were of a most distinctive imperial hue. I took her to the woods to a place about 150 yards from her home and set her at liberty. This was July 14. A Chipmunk frequented our porch all that summer, though I never saw it in clear light close at hand. On September 25 I saw one singing its full song. A cage-trap quickly brought it within reach and I learned that it was my purple Chipmunk, though there was not a trace of the dye excepting on the bare skin of nose and feet. These were now of a bright blue.

This and the opinions of other naturalists comprise all the evidence I have on the home range of the individual Chipmunk, and it leads me to believe that though the animal may go 100 or 200 yards away on occasion, it ordinarily spends its entire life within the narrow compass of two or three acres.

(Pg. 344) The Chipmunk is quite sociable as well as gregarious. Some interesting observations on their sociability are supplied by John Burroughs:

“One March morning after a light fall of snow I saw where one had come up out of his hole, which was in the side of our path to the vineyard, and after a moment’s survey of the surroundings had started off on his travels. I followed the track to see where he had gone. He had passed through my wood pile, then under the beehives, then around the study and under some spruces, and along the slope to the hole of a friend of his, about sixty yards from his own. Apparently he had gone in here, and then his friend had come forth with him for there were two tracks leading from this doorway. Then I followed them to a third humble entrance, not far off, where the tracks were so numerous that I lost the trail. It was pleasing to see the evidence of their morning sociability written there upon the new snow.”

(Pg. 350) I am not aware that any one has ever watched a Chipmunk actually at work burrowing, but circumstantial evidence shows that it adopts an ingenious method of concealing the entrance. Beginning at any convenient point in the selected bank, it drives a long crooked tunnel with an outlet in some thicket or sunny bank. All the earth is carried out and left as a mound at the entrance; when the burrow is finished this over-conspicuous hole is permanently closed up. Thus there is little outward sign of the real doorway to the home. The calibre of the burrow is one and a half to two inches. I do not believe that the Chipmunk brings earth out in its cheek pouches; these are reserved exclusively for food.

A curious instance of pertinacity on the part of the species took place at my home, Cos Cob, Conn. A Chipmunk had decided to make a doorway in the middle of the drive. Accordingly the tunnel appeared, bored from below. I filled it up with coarse gravel, and packed it tight for at least a foot down into the burrow. Two days later it was reopened from below. Again it was rammed full of hard gravel, to be opened again, and within forty-eight hours. Sixteen times during one month did I stop up this hole, and as often it was reopened from below. What became of the bushels of gravel I could not find out, but a general depression at that part of the drive began to show. At the end of five weeks’ struggle I went away from home, for a rest, the Chipmunk triumphantly completing its earthworks. That was in 1903, and he held it peacefully throughout 1904.

In 1905 I renewed the attempt. For thirty successive days in the month of May I closed the hole once, or sometimes twice, in a day, and as often it was opened from below. Twice only was it opened from the outside, and in each case I saw the animal outside when I closed the hole. From this I argue that he had but one doorway, and whatever he did with the earth, it was not brought out of that doorway. Possibly in this case it was stowed in some rock cranny under the drive, which was founded on large stones. In July, though no longer persecuted, this Chipmunk abandoned the hole, perhaps because of the various annoyances, though it must be remembered that July is the season when all the Chipmunks seem to disappear.

In August he reopened it, and dwelt there till snowfall said “bed time.” In 1906 I renewed the battle, but desisted at the end of summer. That Chipmunk holds the fort today, September 1906, and has the satisfaction of giving a jolt to every carriage that too rudely passes his door. The species is known to be wonderfully tenacious of its holdings. Where you find a Chipmunk this year you are likely to find one next year, probably the same Chipmunk.