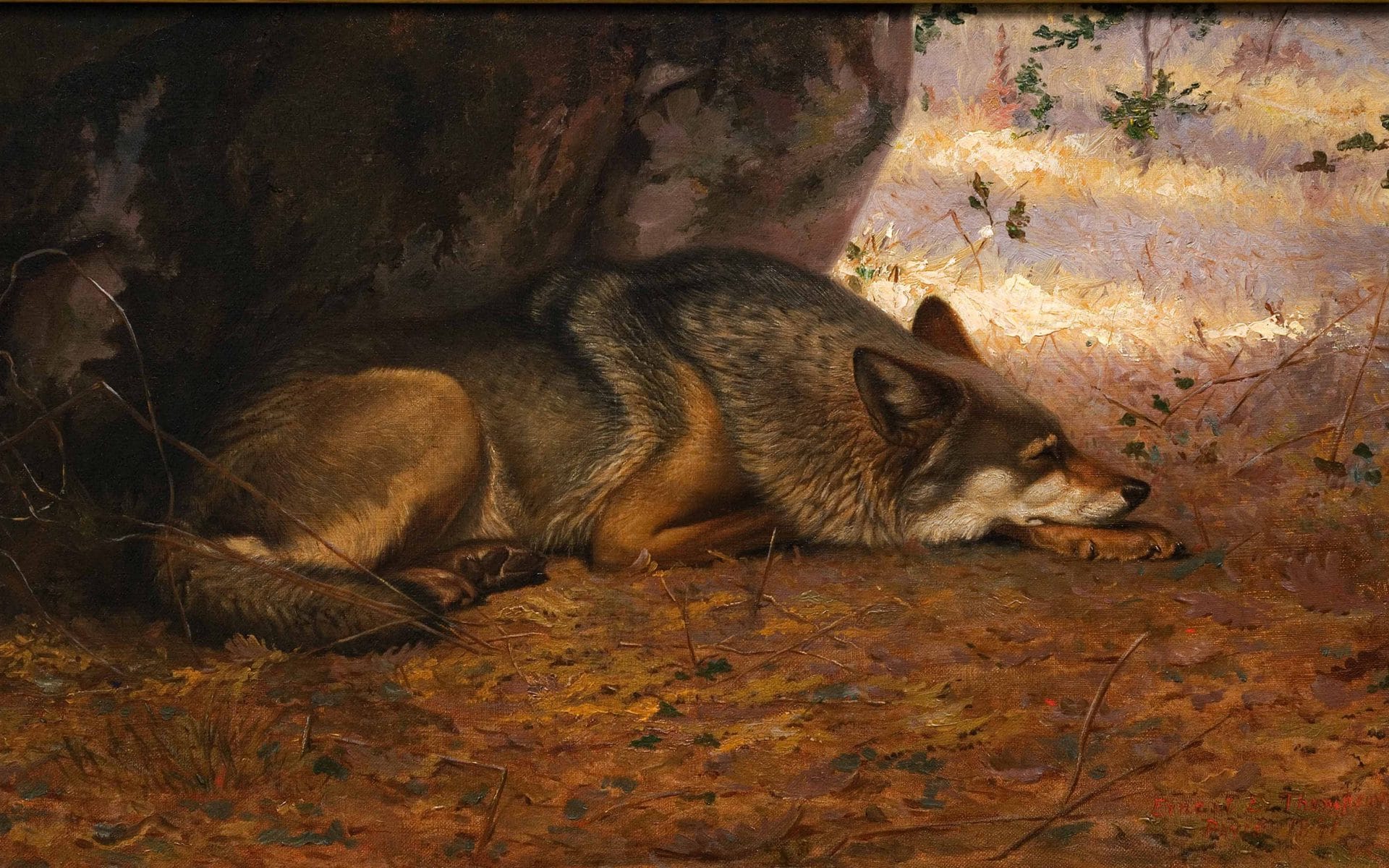 Sleeping Wolf, oil, 1891, Academy for the Love of Learning

There were worse things than to be an unmarried artist living in Paris in January 1891. Like other foreigners, Seton became a student at Académie Julian. Nude models (shocking! and not available in New York or Toronto art schools at the time), no requirement to know French (although Seton gained some measure of proficiency in the language), and the opportunity to make connections (Robert Henri became a friend, also “Irving Coues,” by whom I assume he meant the future Taos artist Irving Couse who lived in France at that time) made the school an ideal entry into European culture. Abraham Archibald Anderson’s American Art Association provided assistance to artists (even to Canadians, apparently) like Seton who were trying to wrap their minds around the chaos and sophistication of the then world’s leading art center. (Anderson was a portrait painter with connections to Theodore Roosevelt and Yellowstone National Park, like Seton in later years.)

Five days after beginning work at the art school, Seton received a copy of his monograph, Birds of Manitoba, which went to print prior to the final editing it needed. In his autobiography of half a century later, he still expressed disappointment with it. He did not meet his perfectionist standards (first major works seldom do), but it was a good effort and spurred him on to create better works in the future. Not surprisingly, the routine of art school could hold his attention for only so long before he had to get out of the studio and outside where he was more comfortable. The Jardin des plantes ménagerie included in its collection a certain wolf that he would immortalize in paint.

He wrote in Trail of an Artist-Naturalist:

“Wolves had always been a favorite subject with me. Among the fine wolves at this zoo was one that frequently took a certain sleeping pose in one particular spot. This made sure of the model. So, on a two-foot by four foot canvas, I made an oil painting of the obliging creature. In one month of half days, the picture was finished, framed; and on March 20 delivered at the receiving door of the Grand Salon of Painting. (Salon de Paris) ‘The Sleeping Wolf’ was not only hung but hung ‘on the line’—waist high, not skyed—it was an astounding event.”

The picture was a masterpiece and this level of recognition by an unknown rustic from North America indeed a rarity. The painting shows that Seton had already achieved a mastery of animal anatomy, going beyond surface realism to suggesting the muscular and skeletal structure of the subject. The beautiful setting suggests that we are viewing the animal in a state of total peace in the remote wilderness. The truth of the wolf’s situation was greatly different, but Seton makes us believe that nature created a special light for the animal for just this moment of our observation.

Seton apparently sold the painting and probably did not see it again in his lifetime but did retain a documenting photograph. But a half century on, in his memory, he inflated the actual size of the piece. It is a small work with a finished size of 16 x 27”—unless someone at a later time cut it out of a larger canvas, but I have seen no evidence of that. I see it all the time because this wonderful painting is on permanent display in the Academy’s Seton Gallery. Following a restoration a few years ago, it positively glows with energy.

(Parts of this essay appeared in slightly different form in my book: Ernest Thompson Seton, The Life and Legacy of an Artist and Conservationist.