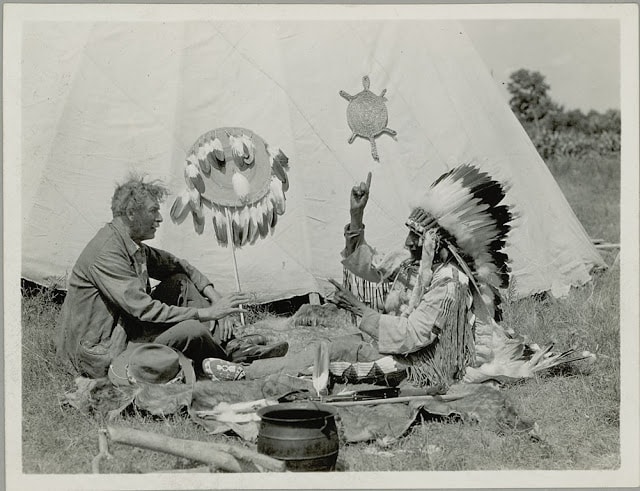 (Ernest Thompson Seton’s daughter Dee Seton Barber worked tirelessly throughout her lifetime promoting the Seton Legacy, that is, the teachings and philosophy of her father. The words that follow are her own, probably written in the 1990s. I recently discovered Dee’s essay in our archives at the Academy for the Love of Learning. dlw)
Seton was a man whom although his skin and upbringing was white, his soul was as theirs, his lifetime action strong proof of this mutual recognition.

From the 1880’s, he went among the people, not to change them, but to learn from them. He respected their culture and their wisdom. He learned their speech and sign, their songs and stories. When invited to council he listened as the wise ones spoke.

He shared their understanding that the two-leggeds and the four-leggeds were each a part of the same whole. He knew that the First People cared for the land with respect. That in their wisdom they took only what they needed to provide for themselves and their children; that they would always be free and the land unharmed, down all through the generations.

He learned to respect their bravery, honor, and strength. He too became wise in the ways of the woods and in the ways of the spirit. He was not a stranger but a welcome friend in the sweat lodge, a council, or alone by a small fire on a hill, listening for guidance from the Great Mystery. He heard the Voices and knew of Vision.

In his youth (in Manitoba), he first learned about the wisdom of the people. He sought to expand his knowledge and learned many things from the Ojibwa, the Sioux, the Cree, the Blackfoot, and the Six Nations at their invitation. He lived with the Crow, the Lakota, the Cheyenne, the Navajo and Pueblo peoples. He knew the Cherokee, the Omaha, and the Kiowa. All his life he shared a deep, mutual respect with the First Peoples, the Native Americans.

He became well known throughout the world for his art, his science, his writing, and, his philosophy toward the environment. He spoke out in Canada, in the United States, and in Europe. He spoke and wrote about the lessons he had learned in camp and council. He opposed armies that sought to confine the [native] people.

He opposed the traders who brought the poison of alcohol to the people. He spoke against governments that were determined to change the people, kill the buffalo, dishonor treaties. He despised missionaries who imposed their beliefs without recognizing the wisdom of the old ways.

He was tortured with the thought that all of the teachings of the elders would be lost, and the European settlers would destroy the heart and soul of the people, as he knew them a century ago. Not only taking their lands but also their traditional ways of living.

He was an advocate for native rights in a time when the West was being destroyed by the greed and avarice of the settlers. He sincerely believed that the highest duty was to provide for and protect the community, not gain or hold riches, but to share and be responsible for the welfare of all.

He personally knew many of the historical characters. He worked with them sharing knowledge and experience.*

Their fight became his. He used his name and fame to help the people, using his entry into the worlds of politics and power to present the case of the Native American.++

The legacy of this man still lives today, in the people around the world who read his books, [who] choose their career because of the influence he had upon their childhood.

The people believing [in the Seton Legacy] understand the positive influence his heritage can be in a world gone mad with greed and destruction. They come from many different parts of the world, from an astonishing assortment of professions, lifestyles, and beliefs. He connects them and the legacy he gave to everyone.

When he wrote his book on Native Americans, [The Gospel of the Red Man] he formed a panel of experts from Native American and Europeans who had made a lifetime study of the old ways. As well as extensive study of the old reports, he asked each one of these to read the manuscript, and make suggestions and necessary revisions. This panel was: Chief Standing Bear (Lakota); Sunflower (Lakota); John J. Matthews (Osage); Chief Oskenonton (Iroquois). The descendants of the European settlers: Mary Austin; Dr. Edgar L. Hewett; Kenneth M. Chapman; Dr. George Bird Grinnell; James Mooney; Dr. F.W. Hodge; Mrs. Laura Adams Armer. Among his close friends were Natalie Curtis; Alice Fletcher; Fredrick Burton; Lorenzo and Ramon Hubbell; Frances Densmore, and many others that did the early recording of different Native American Tribes.

Seton’s Native American heroes were: Kanukuk, Wabasha, White Calf, and above all Tecumseh.

++He [also] fought to preserve the wilderness, the home of the wild animals of North America—the buffalo, the wolf, the bear, the lynx, the great birds [including] eagles, hawks, cranes, and the songbirds. He found glory and prayer in the voice of the songbirds.