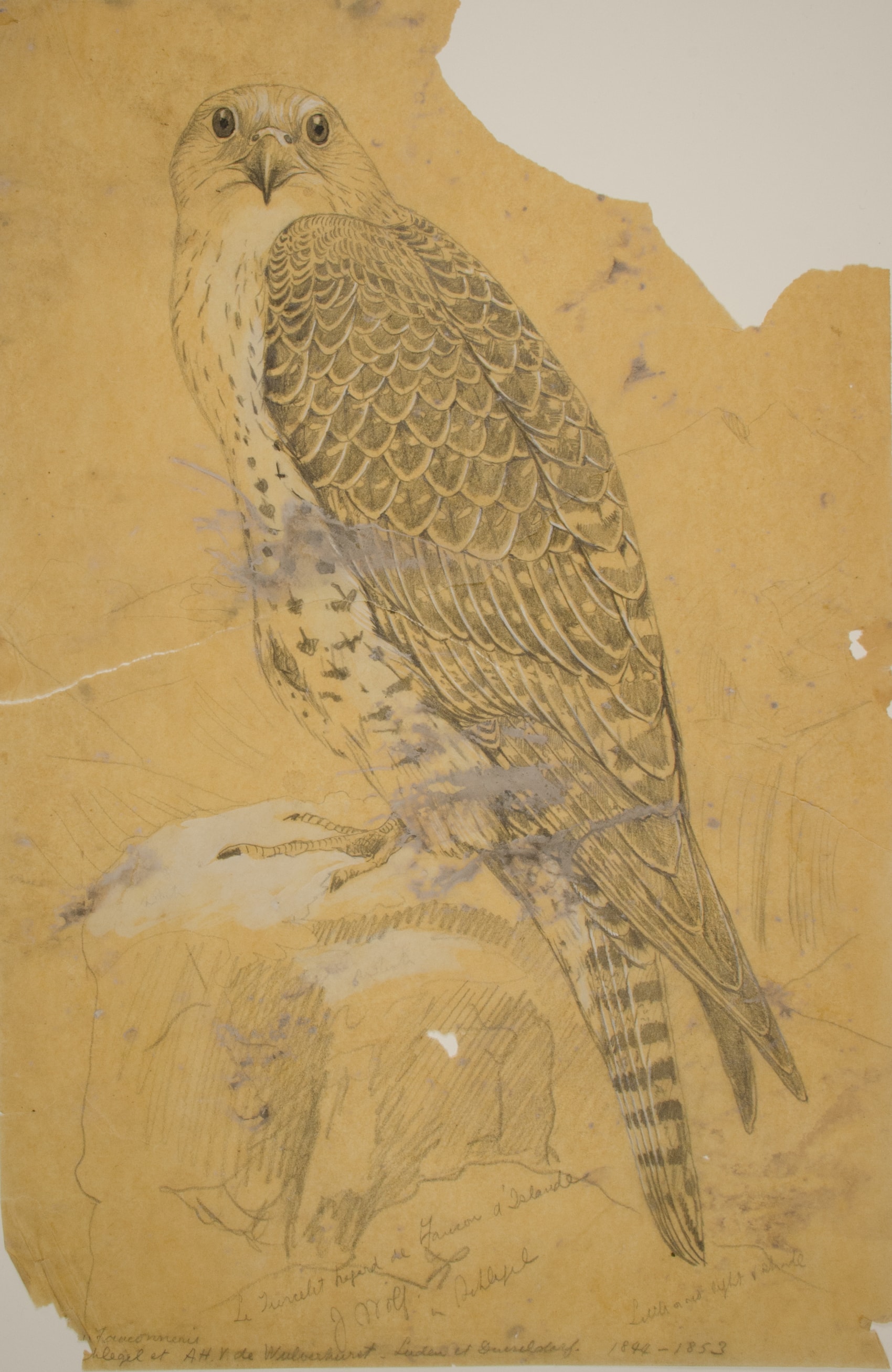 Seton embarked for London in June of 1890, made a brief sojourn to Paris in August, but returned to England for the autumn and early winter. He had been disappointed in France “to find the studios all closed for the summer” but happily returned to the London Zoo where he had made many fine drawings during his earlier trip. {{internal link to cat illustrations}} More importantly, he met the leading wildlife artist of that period, the appropriately named Joseph Wolf.

Like Seton, Wolf had a strong inventive sense, making his first paintbrushes out of marten tail hair. He underwent formal training in lithography, but must have been a natural at creating art from a young age. He was a dedicated worker with a record of prodigious output of paintings, prints, and drawings.

Wolf (1820-1899), German by birth, but long a resident of London where he worked at the British Museum, was perhaps second only Edward Landseer in reputation. His biographer, A. H. Palmer, wrote of Wolf in 1895: “I do not intend to compare Joseph Wolf’s works with those of any other artist living or dead. His achievements, his artistic mastery, his ideal, and his manly loyalty appeal to me so strongly, and fill me with such overpowering admiration and respect, that I should fight against prejudice in vain.” (I would like to recruit this guy to write my bio.)

By fortunate circumstance, Wolf was one of Seton’s favorite artists. Not only was he still alive at the age of 70, but was also close at hand, living but a few blocks away from where the Canadian naturalist was staying. Encouraged by a friend, the young Seton got up the nerve to approach the revered elder. Seton gives this description: “He was a genial old Santa Claus, of noble countenance and gracious manner. He praised, he analyzed my drawings, and invited me to come whenever the spirit moved me…I called on him several times during that autumn, and always came away helped and encouraged.”

Their time together may have been limited, but comparing the work of Seton to that of Wolf, the older painter appears to have had a significant impact on the younger one’s stylistic development. Seton’s subsequent production of bird drawings, both in flight and perching, bear a striking resemblance to those of Wolf.

Like Seton, Wolf was a life-long self-taught naturalist. He favored working from live specimens where possible, and was a stickler for presenting his subjects with their correct anatomy. At the same time, Wolf did not create dull academic representations, but imbued his subjects with aliveness, bringing his own painterly aesthetic to the portrayals.

This brings up an important issue in Seton’s 19th century work. He created perhaps thousands of animal drawings for various publications. Unfortunately, these seemed not to have been returned to him—presumably, standard practice for the time. And even if they had been returned, I can see from reproductions that most were not dated. As to the few surviving originals, either those are not dated or in a few where Seton wrote dates, he appears often to have added them decades later (with an unknown degree of accuracy). In either case, we are left with large gaps to fill in following the stylistic progression of his career.