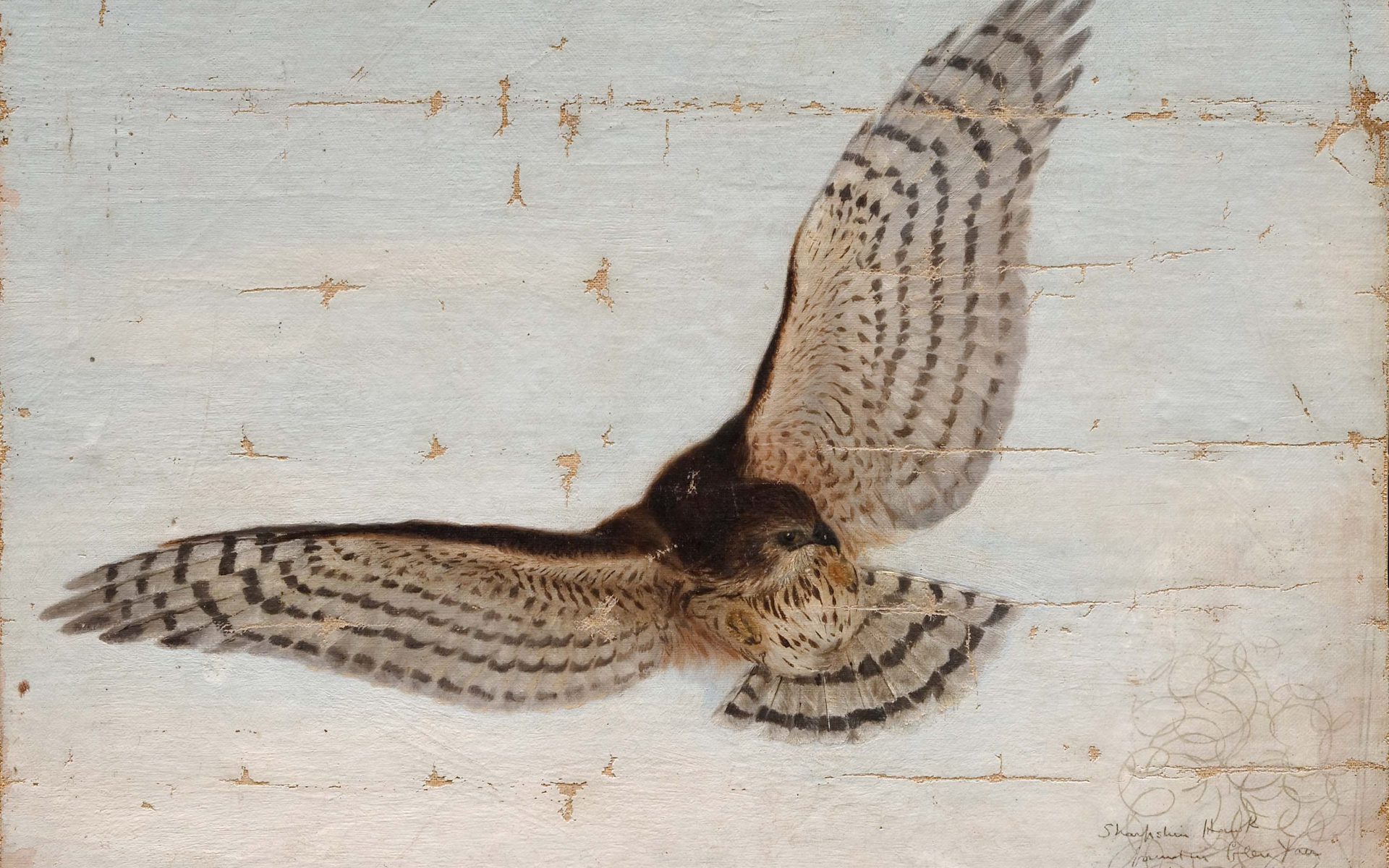 Is an artist born naturally gifted with a talent for painting or is it a matter of nurture, or some of each? While we probably can’t know the answer to that for sure, Seton’s first formal painting is extraordinary. Hiking through the Don River Valley, in the woods near his Toronto home, Seton came upon a dead sharp-shinned hawk, shot by a hunter for whatever reason.

According the account in his autobiography, he “got a full-sized thrill out it.” Always of an inventive nature, he created a frame to hold the specimen as the subject for an oil painting. He managed to arrange it in such a way as to suggest flight, accidentally recreating “the very same [type] of apparatus” used by John J. Audubon for achieving a life-like appearance. This subject presented a significant challenge.

At sixteen, Seton had dabbled in oil painting under the guidance of a neighbor lady, but had not yet begun formal training. Presumably he attended school (this was in September 1876) as well as, with his strict Calvinist parents, church services. But over the next two weeks he found time to put his already considerable observational powers to work. He recorded every detail of form and feathers, even knowing to paint a tiny white dot in the eye of the bird, needed for giving a lifelike appearance. Apparently his parents were not thrilled. Seton claimed this was because they opposed his study of natural history. Maybe also, hosting a dead bird in the house for two weeks was a bit of a stretch for them.

The result was a fine work of art and one of the treasures of the Seton collection at the Academy for the Love of Learning.

Soon thereafter a painter (whom Seton does not name) instructed him in technical matters of paint application. Then, in a turn of good fortune (always a plus to have a bit of luck starting out as an artist), Seton met the painter Charlotte Schreiber. Then in her early forties, Schreiber trained in London as a young woman where, among other subjects, she studied anatomy. She had only recently moved to Toronto with her new husband, arriving as an already established and respected artist, uncommon in the male dominated field of painting. Schreiber taught at the Ontario School of Art; Seton took lessons from her and few others there.

Seton also came to the attention of Anne Arthurs, owner of a mansion named Ravenswood. She appears to have become an early if not his first patron. Seton, then very thin, six feet tall, and sporting unkempt longish black hair, probably already demonstrated the charisma that would attract so many men, women, and children over the next many decades.

(Sharp-shinned Hawk image, all rights reserved by Academy for the Love of Learning)