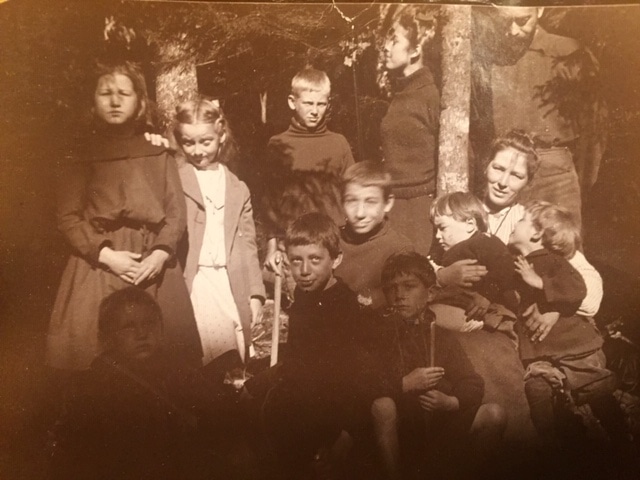 Photograph of young Louise Sangree with her parents and siblings. She is standing in left profile, back against a tree.

The following handwritten 1902 letter from a remarkably observant young woman, Louise “Luise” Sangree, is important for being a first-hand account of the Seton Indians from their very first summer. (The organization was incorporated as the Woodcraft League in 1915.) Seton sent a typed response included below (fortunate given his nearly impossible to read handwriting). Luise (the oldest of eleven children) would go on to marry Frederic Cope Sharpless bearing four children and living an extraordinarily long life (1886-1987). Terms such as “Injun” and “squaw” and other references to indigenous peoples are either innocent (at least on the part of Luise) or the worst of unconscious (or intentional) colonizing attitudes, depending upon your perspective.

Special note: The names Uncas and Chingachgook are from James Fenimore Cooper’s novel, The Last of the Mohicans, best known to a contemporary audience through the 1992 movie directed by Michael Mann.

The two letters were provided by Luise’s grandchildren Marianne Potts and Peter Bowers. They knew her as “Louise,” so perhaps “Luise” was a family nickname.

My greatest thanks to them for the opportunity to share this correspondence. The family photograph is also used with their permission.

In your last article published in the Ladies Home Journal, you tell of the only Seton Indians that you know of. But they are not the only ones who followed your plans.

Three families of us camped in the Pocono Mountains, along a lake. Two Quaker or Friends camps, and our camp. There were four children in one of the camps, and eight in ours, but three of our camp were babies. The nine formed the “Tribe of the Poconoks” Our war cry was “Yok, Yok, Poconok, Poconok, Heron” (the Heron long drawn out) Our totem was to be the first wild thing we saw (and knew the name of) on our first tribe walk. It happened to be a large blue heron. Our wigwam is a shelter lean-to after the kind the hunters make. We made it of long poles covered with bows. We held two of our grand-councils in it, with a blazing fire in front. All the other grand-councils were held around an open camp fire. The Chief was seated on the chair of honor. Then the next in age was arranged on either side of him, and so on down the list. As we got our coups, we were seated by the number of coups each one had. In our first grand council, we elected the chief, and resolved that the squaws should have equal rights with the men.

The names of our warriors and squaws were Uncas—the chief, Honeysuckle, Blue Heron, Chingachgook, Minnehaha, Black Hawk, Chibiabos, Red Bird, Eye Bright, and Tunkhanuk. The visitors to the camp also joined and they were Pearl, Feather, Black Horse, Waneeta, Hiawatha, and Lavan. Our mother was “medicine man,” and she was called Fern Seed. The mother of the others was Nokonis.

Our tribe walks were very pleasant. We walked Indian file—the Chief first, and the others following according to age. Our first walk was a seven mile one. The longest walk we took was 16 miles. We each carried a stout staff, a wallet with corn bread a piece of ham and bread & butter in it; a tin cup, and a coat. We took only what Indians would have taken. No cookies nor cakes were allowed. We toasted our ham over a camp-fire.

Two trips to a beautiful fishing lake; Big Pond by name, was taken by those who had bicycles. My father went along. We rolled our blankets in a bundle, and strapped it on the front of our wheel, after riding for 12 miles, we tramped 2 ½ miles into the mountains carrying our bundels [sic], and two days provisions. We slept under a lean-to and on the ground. It was a novel and delightful experience.

We had our own rules for winning coups. We used your three and a half mile walking rule, the coup-fires and made rules in rowing, swimming, huckle-berry picking, and in doing gymnastic stunts. The coup-fires did not work well for it was too wet.

Our baby of two years gave the war-whoop in the train as we entered the Deleware [sic] Water Gap, much to the amusement of the passengers.

We feel that we owe you a great part of our summer’s pleasure; and thought that you would be glad to know that you have given pleasure to the Pokonoks, as well as to the Orphan’s House Children.

To Blue Heron, Chief Squaw, Uncas, the Chief, and to the Head Warriors and Squaws of the Tribe of the Poconoks,a most cordial Greeting: —

Your most kind letter of October 8th has just reached me and filled me with pleasure. I am very glad to know that you are learning how to enjoy the woods and get the most out of it, for that is what ‘playing Injun’ means. I am much interested in the various coup[s] that you speak of. I think that the walks that you have taken are perfectly wonderful. Some day I shall speak of other important coup[s] that our Indians ought to win. I hope that you will add a teepee to your equipments [sic] assoon [typo] as you can—even a small one is a great pleasure, especially in countries where it is cool at nights or where there are mosquitoes. I find that there are a great many bands of Seton Indians springing up in various parts of the country. Some day, we shall probably have a general meeting at some good summer camp ground.