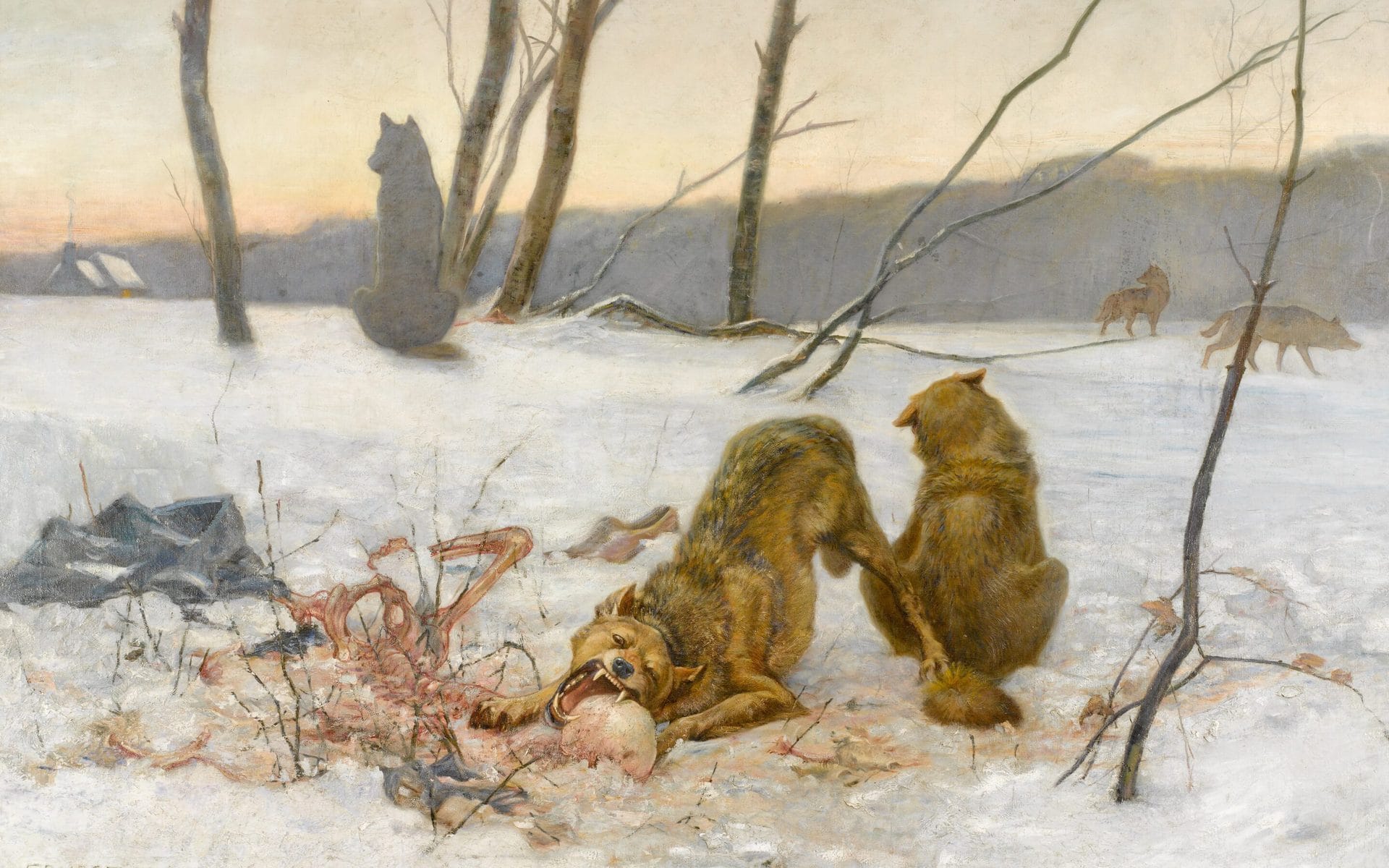 Two major Seton paintings, Triumph of the Wolves (Triomphe des Loups) and The Pursuit (La Poursuite) are on display at the Seton Memorial Library, Philmont Scout Ranch. Both have been popular attractions for generations of visitors. Seton would feel vindicated. When he painted them in 1892 and 1895 respectively, he was expecting an overwhelmingly positive response. It didn’t happen.

Triumph, which is also called Awaited in Vain (La Vaine Attente) became a wonderfully ironic title because the recognition Seton sought (a triumph!) with these wolf images was indeed awaited in vain. I should mention that any artist who aspires to stardom needs to be 1) very lucky and 2) have a big enough ego to survive the quest. (Talent can be helpful but is less important than the other two.)

Seton was hopeful about achieving success with the two large paintings after the favorable reception to his small masterwork, The Sleeping Wolf, in 1891. Triumph (wolves get their revenge on a trapper) was a critical failure while Pursuit (just another day in a wild Russian neighborhood), the better of the two in my view, came too late to make any difference to his desired fine art career as an “easel painter.”

Keeping in mind that all this happened before he became a star in the literary world, Seton was nothing if not super ambitious. A lesson in humility, actually two, came at him with the debut of Triumph. Seton entered the work into the Salon, the world’s first great international art exposition, founded in 1667. According to the cultural historian Annie Cohen-Solal in her book Painting American, submitted works were treated to a terse “Accepted” or “Rejected.” Seton got the latter message in April 1892. (Part of painting Triumph took place outside in a park – the various bloody props caused passers-by to call the police in case a crime had been committed.)

Next up: Seton displayed Triumph for public viewing at his father’s house in Toronto – to mixed reviews. He submitted it for inclusion in the “Canadian Section of the World’s Columbian Exposition” of 1893 held in Chicago commemorating the Columbus voyage of four centuries earlier. Six judges were assigned to vet the entries into a 2895 sq ft two-room gallery with 15-foot ceilings. The preliminary report on the event warned: “Since the space allotted to Canada in this section is less than that asked for, the selection of pictures will necessarily be more rigid….”

Not Exactly a Triumph

So rigid indeed that Triumph was rejected. Seton launched a campaign to get that decision reversed. Reading between the lines, it appears that Seton made such a pest of himself that a couple of judges decided it was less trouble to accept the grotesque thing (wolves munching on a newly killed person) than fight the newly minted “Naturalist to the Government of Manitoba,” yet another triumph he insisted on receiving, although the designation appeared to be a title in search of a purpose. So the painting was shown. (I found the exhibit catalog at at the Internet Archive.)  I haven’t yet found any reaction to it one way or another, and would like to see an In situ photo; will keep looking and let you know if I find anything. (Trivia section: The Agriculture section for the Canadians was allotted 10,000 sq ft for horses, cows, etc. and up to 200 dogs. I haven’t found out anything more about the dogs but will keep looking for that as well.) 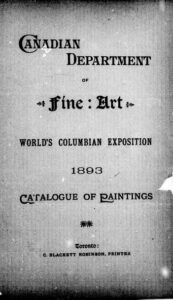 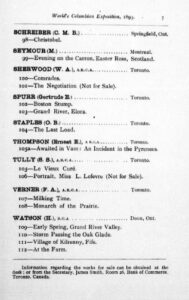 Keep in mind that Seton was still using “Thompson” as his professional name in 1893. Fortunately, this rare catalog listing the Canadian artists somehow survived. (I found it at the Digital Research Library of Illinois History® ) 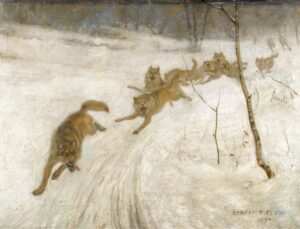 If Triumph was melodrama, Pursuit was high literary man vs. nature visual story with nature on the verge of getting the upper hand. Painted in Paris in 1895 on yet another sojourn in the City of Light, Seton submitted it to the Salon with almost the same result as the last one. The painting itself was rejected but studies for the painting were accepted. A sort-of victory, but more evidence that finding fame and fortune as a painter was not in the cards. Nonetheless, the human-to-nature relationship that Pursuit foreshadowed (a good match to the Lobo story from 1894) was an indication of the direction Seton’s literary career would take by the end of the century.

(All rights reserved to Triumph of the Wolves and The Pursuit.)