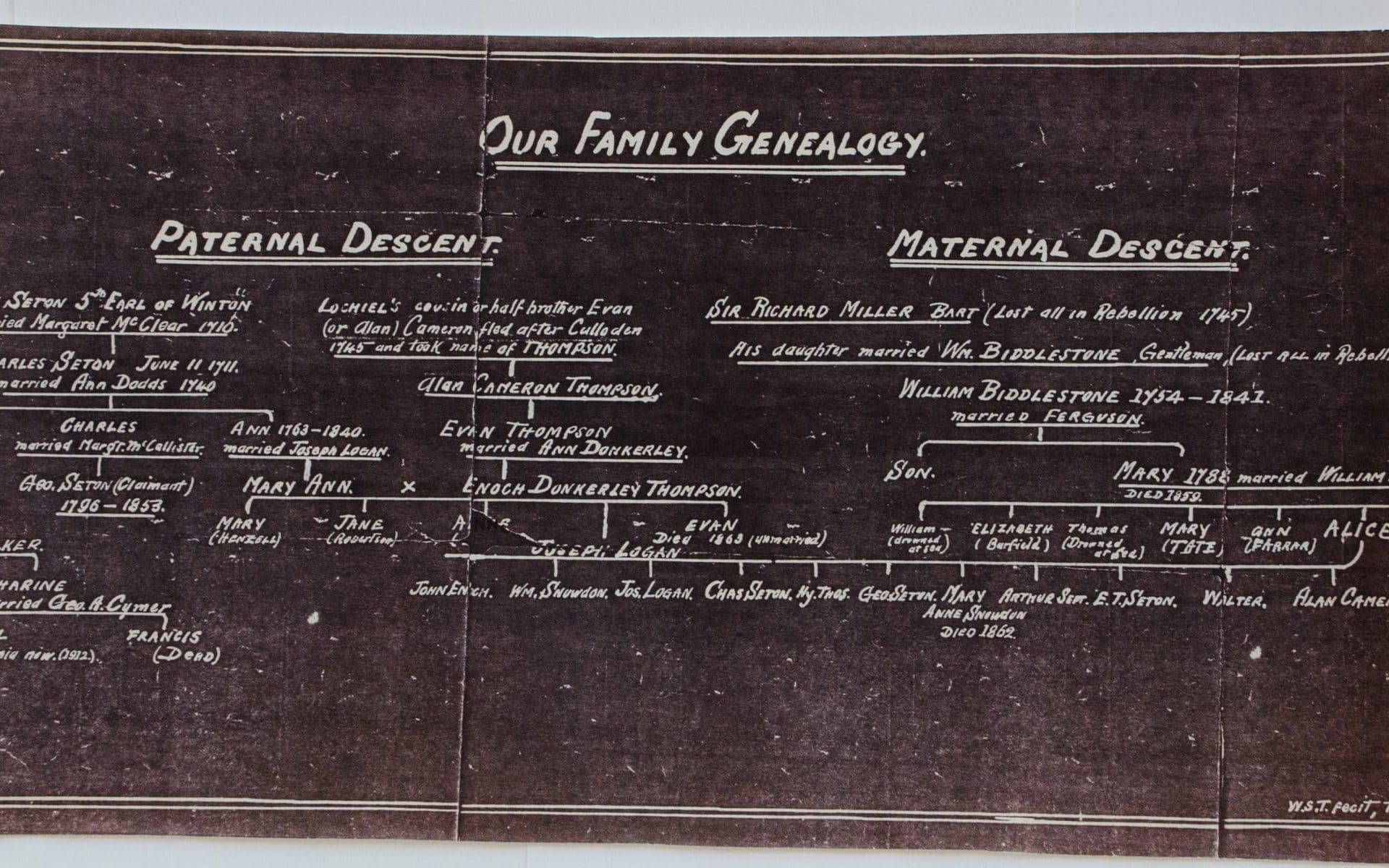 An interesting thing happened on the way to 1745 in Scotland. The Highland clans of MacDonalds, Macleans, Stewarts and Camerons decide the time was right for a restoration of the royal Stuart dynasty. (The founder, James I, in 1604, suggested that smoking caused lung disease.) They rallied in support of the remaining Stuart heir, “Bonnie” Prince Charlie but got thoroughly trounced at the battle of Culloden. British forces thereafter launched a genocidal war against Highland Scot culture. See the historical literature on this topic or skip straight to the dramatic retelling in the Outlander novel series.

One of the defeated Cameron families assumed the more English name of “Thompson” eventually finding refuge in the northern England city of South Shields. By the time of Ernest’s birth in 1860, they were likely fully acculturated into their new country. (The Cameron line has been traced to ancient Scot and Danish roots. The Seton name came from continental Europe, Flemish or Norman).

The family had biological (Cameron), political (Thompson) and emotional (Seton) ties to three different surnames. By the time of Ernest’s generation, he and his many brothers each claimed one or more of them. “Seton” most appealed to Ernest at an early age, and he changed to that name as soon as he could legally do so.

This may have been the cause of the rift with his father Joseph Thompson that would never heal. Ernest’s mother was offended as well and the “Ernest Thompson Seton” form of his name did not show up on his books until after Alice Thompson’s death in 1901.

In any event, Joseph moved the family farther from Scotland in 1866. The failure of the family business shipping business (actual ocean-going ships according to Ernest) caused them to immigrate to Canada by way of Quebec. Their destination became Lindsay, Ontario, a frontier settlement where Joseph experienced a second failure, this time as a farmer. He later moved to Toronto where he worked as an accountant.

Ernest’s upbringing was remarkably similar to that experienced by that other Scot, John Muir, a generation earlier. An existence made dreary by hard core evangelical parents. A school of hard knocks education that created a remarkably tough (although thin-skinned) kid. And importantly, contact with wild nature through which young Ernest would transform into the man Seton, using that knowledge to transform the world.