Seton and the Royal Academy in London Biography 1878-1881 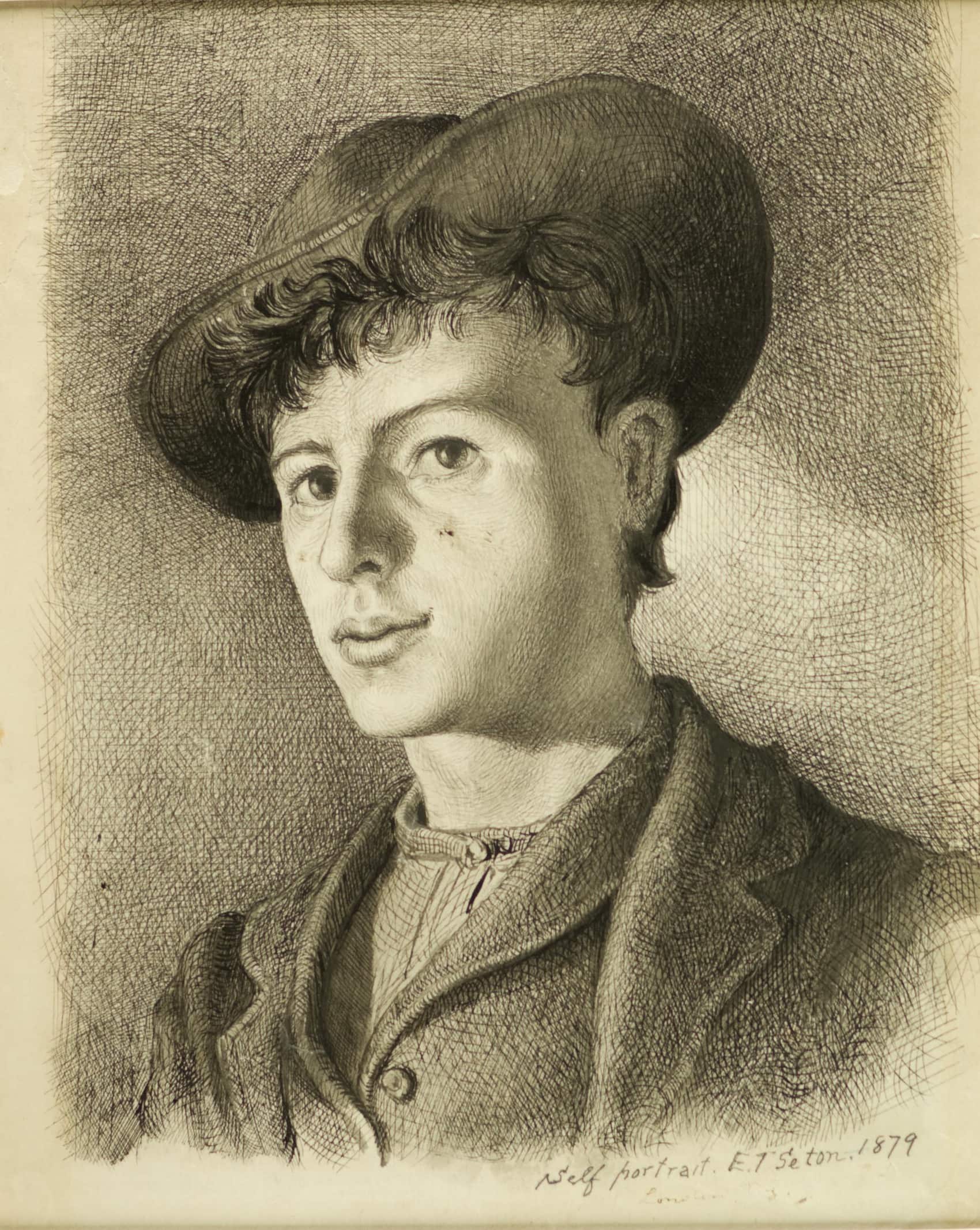 In 1879, Two weeks after his nineteenth birthday, Seton settled in London and “opened a new epoch in my life.” He became a literal starving artist. The featured photograph at the head of this essay is a self-portrait drawing from that period.

A rustic from the Canadian outback, the sophisticated art scene (even if among other inexperienced young adults) was at once present around him yet also distant as extreme poverty and lack of connections kept him on the fringes. “I was living a solitary life,” he wrote in his autobiography, “solitary and hungry. But happy!”

Not having the funds to enroll in an expensive art school, Seton instead applied against stiff competition to the “Royal Academy School of Painting and Sculpture.” He submitted a drawing, “Hermes,” about four months after arrival in London (it failed) and again in December 1880 when he was accepted. He studied for ten or eleven months providing no details about teachers or art instruction indicating perhaps that the fantasy of being an art student proved more appealing than the reality. (He did mention a landscape with animal figures painted near Whatstandwell, Derbyshire, “The Goat Defending Her Kids from The Fox” which resides in the art collection at the Academy for the Love of Learning.)

Instead, Seton tells other details of his life in England, memories presumably of greater importance to him. Some were painful—he was destitute. Now far away from his Calvinist family, he admitted that church religion “never had any message for me,” and instead took spiritual nourishment from long walks.

Of greater importance was Seton’s intellectual development. He claimed to have written letters to various dignitaries asking for special permission (needed due to his youth) to become a reader at the library of the British Museum. There, staying through long evenings, he discovered the writings of John Burroughs, Henry David Thoreau as well as the leading biologists of that time.

A Digression About Seton and Ornithology

Of course Seton, being Seton, came to the conclusion that he could do better work than many of those he was reading, particularly in respect to birds. In subsequent decades he would work directly with one ornithologist, Frank M. Chapman, and heavily influence another, Roger Tory Peterson.

Curiously, Seton went unacknowledged in Chapman’s 1895 Handbook of Birds of Eastern North America. Chapman however credited Seton in the 1912 Revised Version: “The Key to Families.—The scheme of this this key which, since its appearance in the first edition of the ‘Handbook,’ has been so widely adopted, originated with Ernest Thompson Seton. The key here presented is, with some modifications and expansions, based on one contributed by Mr. Seton at a time when he was expected to be a joint author of this work.” Seton did illustrate Chapman’s 1897 book, Bird-Life. Peterson credited Seton’s contributions to bird identification in his 1941 A Field Guide to Western Birds.

In another essay, I will go into why Seton is not better known. He contributed mightily to many fields.

At the end of October 1881, Seton returned to Canada physically spent after months of privation as a student and a rough passage across the Atlantic. In the interim he continued his studies at the British Museum, at the London Zoo, and with a few friends he made along the way including distant relatives by marriage in the rural community of Saffron Walden, Essex. There he left the trials of city life behind by birding and by befriending a fellow age-mate and naturalist. This was a welcome distraction from his having been overcome by the sex urge. For a boy of ultraconservative background, this was a moral trial of considerable importance. (He claimed to have resisted temptation.)

There is one last, brief mention Seton makes from this period. Scattered about in a few places in his autobiography are references to the Buffalo Wind. These were sudden onset spiritual episodes that he believed guided the course of his life from the beginning. Together, these guided him to western North America (Canada and the U.S.) and into close contact with the native peoples of that region.

In the next decade Seton would return to London and spend time in Paris, but as the autumn of 1881 approached, the mystical message he received directed him back to New York by way of Manitoba.