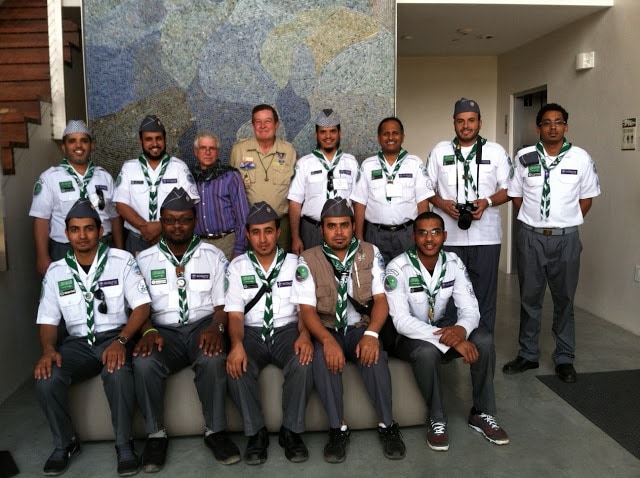 Members of the Saudi Arabian Scouts Association visited Seton Castle and the gallery at the Academy for the Love of Learning on June 27th. Twelve adult Scout leaders (one of whom took this picture), two interpreters, and local Santa Fe Scouter Grant Wright were in the group. Over more than an hour we toured the Academy, talked about Seton and exchanged information about Scouting in our respective countries. Organized by the U.S. State Department, their stop over was part of a longer three week tour that included a visit to Philmont. This International Visitor Program was called “Messengers of Peace.” They observed the call to prayer in the Seton Gallery – definitely a first for that space. They gave me a black and white scarf as a memento of their visit.

It came as no surprise that Scouts in Saudi Arabia combine a love of the outdoors with community service. They play an important role in operating Public Service Camps in Mecca during the Hajj. In 2012, over three million Muslims took part in the pilgrimage. Over 600,000 took advantage by services provided by Saudi Scouts, especially guide services. With that many people, getting back to your tent must be a challenge. I have a hard enough time trying to relocate my car in the parking lot of the Taos Wal-Mart. Who better to help you find the trail than Scouts?

They told me that Scout membership in their country has reached 150,000 members. The organization was founded in 1356AH which I think translates to 1957. Some of the details are different, but anyone familiar with Scouting in the U.S. will recognize the fundamental aspects of Scouting in Saudi Arabia:

Its Method: “The scouting movement is characterized by its reliance on a holistic method in which it depends on choosing proper activities according to the age of the participants in this method which can be summarized as follows: 1. Commitment to the scouting pledge and law. 2. Sextet system or van guards. 3. Badge system (merit hobby medals). 4. Learning by practice. 5. Wild life. 6. Progression and variedness of hard work programs.

The Scouting Pledge: “I pledge to do my best towards Allah, the King and country, to help people in all circumstances and to comply with the scouting law.”

Seton probably did not anticipate his youth movement taking root in the desert lands, but who knows? he was foresighted.

We greatly enjoyed the time spent with these Scouts and look forward to welcoming more international visitors to the Academy and Seton’s final home in the future.
www.aloveoflearning.org