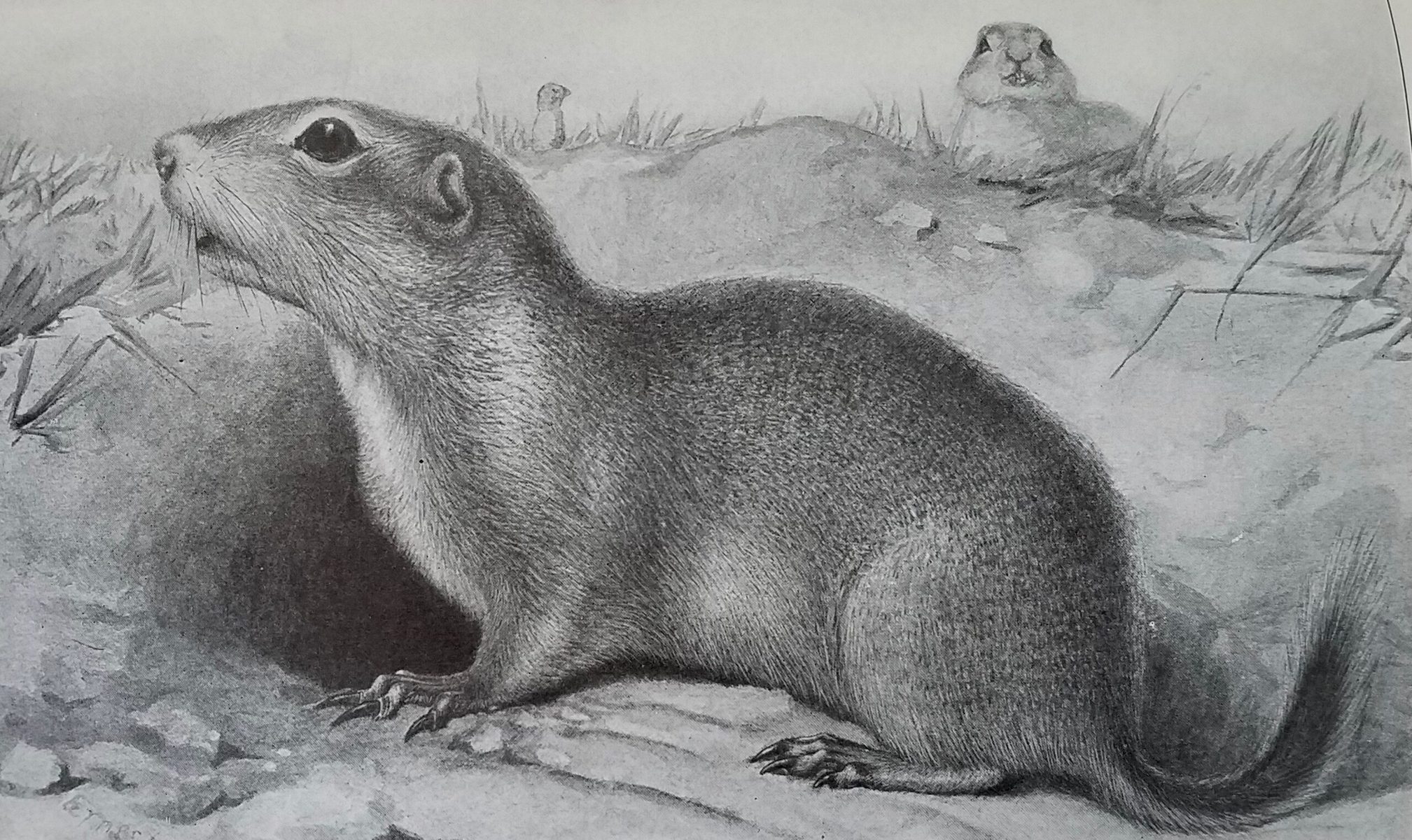 (Pg. 384) This is the most sociable of our three Ground-squirrels, as it commonly nests in straggling colonies, the members of which doubtless profit by each other’s presence in learning of approaching danger, yet I never saw them indulge in any sort of game or social pursuit, or attempt to combine their efforts for a common cause. Nevertheless, as Coues says, “Their gregarious instinct is rarely in abeyance. A few thousand will occupy a tract as thickly as the prairie-dogs do, and then none but stragglers may be seen for a whole day’s journey.

(Pg. 385) The species utters a husky alarm whistle as soon as it scents danger, and the end of the tail is raised at each whistle; NICA thus we have directive sounds and marks combined. Old plainsmen say that a Prairie-dog’s voice is tied to its tail, be cause every time it lifts one it lifts the other, and when one stops the other does. This is equally true of the present species.

(Pg. 389) The coming of the plough put a new complexion on their lives. The farmer killed the Buffalo and the prairie herbage. Very properly, then, the farmer is a lawful prey, and this Ground-squirrel easily heads the list of the four-footed pests with which the agriculturist has to contend in Manitoba.

In 1889 a law was passed providing a bounty of three cents to be paid for every Gopher tail delivered. The only tangible result was a depleted treasury. The Ground- squirrels continued to exact their tribute of many bushels per acre. Bailey considers that the loss in ripe grain eaten, stored away, or destroyed in autumn is small compared with that which they cause by digging up the seed after it is sown in the spring, as each kernel taken then deducts many fold from the crop.

It seems to be the habit of the species to carry food home in its cheek pouches for immediate consumption as well as for winter stores. On May 23, 1884, I captured a Ground-squirrel from a very righteous hawk that had caught him raiding a grain-field. This was a very large specimen, a male; it weighed 13 ounces. Its cheek pouches contained 240 grains of wheat and nearly 1,000 grains of wild buckwheat, which is a noxious weed. Another, taken July 26, had in its cheek pouches 162 grains of oats.

The Ripening Crops In August

(Pg. 390) The ripening crops in August afford the Ground-squirrel a chance that it never neglects. Load after load of the golden grain is garnered into its own bin, some six feet underground. In October the store is untouched and the owner sound asleep. I have but one personal observation in support of this. On October 27, 1884, I followed a Badger track in about two inches of snow that had fallen the night before. The Badger had come to a Ground-squirrel’s hole and, guided no doubt by scent, dug straight down about six feet. The evidence showed that he had found and devoured the owners. Clearly they had omitted to plug the doorway and had paid the extreme penalty of their neglect, for there was the nicely made bed torn open. But also I saw there the storehouse containing about two quarts of wheat, all of it sprouted. Evidently the Badger was not interested in wheat, as it was lying in piles, and apparently there was as much in sight as the little bin would have held.

(Pg. 392) Toward mid September, as the days grow short and the mornings chilly, the Ground-squirrel comes out less often. By the end of the month, or at latest the middle of October, it says good bye to the light upper world and sinks, like the flowers, into the slumber that is to last until spring. For half of each year, half of its life is spent in a sleep so deep that it is a temporary death.