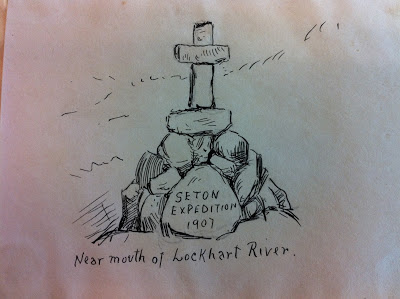 On Sunday, August 14th, the Academy for the Love of Learning will mark the 156th birthday of Ernest Thompson Seton with a new art exhibition and a documentary film.

In a highlight of his extraordinary life as an artist, writer, and scientist, Seton led a daring expedition into the Arctic wilderness of the Northwest Territories in Canada, an area then largely unknown to the outside world. His dual goals: documenting the wildlife of the Boreal forest and the tundra, and determining the geography of a remote lake, Aylmer.

Last year, the Academy mounted the “Arctic Prairies II” expedition to Aylmer Lake in search of the places Seton described more than a century earlier. The results of our research can be seen in an exhibition of his drawings, and in a new 30-minute documentary film, Ernest Thompson Seton and the Exploration of Canada’s Fabled Aylmer Lake.

Respect for Nature and its Creatures

Through his writing and the example of his life Ernest Thompson Seton called on us to respect nature and all its creatures, and to develop a personal and meaningful relationship with the outdoors. In his work he demonstrated our close kinship with wild animals but as well he examined the dark consequences of environmental destruction.

Seton led an expedition to the western sub-Arctic in 1907 that gave him an opportunity to reflect on the nature and society of a place that is far away from the big cities of Canada and the U.S, but not so far as not to matter.

Given that the rapid environmental changes overtaking the Arctic will have consequences for everyone as the planet continues to warm, last year the Academy sent its own expedition to explore the northernmost part of Seton’s route, Aylmer Lake.

In Seton’s time, the area was home to abundant wildlife including caribou, musk ox, and wolves. One hundred and eight years later the once vast migrations of caribou have become the stuff of history and may not long into the future become the stuff of legends. Global heating and over hunting (by humans) have made Aylmer a more quiet and somber place, although the landscape of endless sky and low but rugged hills are much as Seton experienced.

Human activity has increased in the Northwest Territories and the sub-Arctic has experienced summer warming from climate change. Highways now provide access to the southern third of Seton’s route, but Aylmer Lake remains accessible only by boat or by air—a nearly two-hour airplane trip from Yellowknife.

Importantly, with modern explorers going in search of the Seton legacy, the story continues. In 2015, the experience of wind and storm, twenty-four hour daylight, and an enforced closeness to the land (expedition members had to fish for their food) led everyone on the trip into periods of reflection and just being.

Expedition members from the Academy (three of the five on the trip from last summer) will share their experiences with the audience as an introduction to the film.

In May 1907 New York-based artist/naturalist/writer Ernest Thompson Seton (1860-1946) began the most extraordinary wilderness journey of his life. By the age of 47 he had become the most important wildlife illustrator of his generation and, as the creator of the realistic wild animal story, achieved best-seller status as an author. He popularized the cause of wildlife conservation to a mass audience, laying the groundwork (along with Muir and Roosevelt) for today’s environmentalism.

He introduced a concept of outdoors education that became the worldwide Scouting movement (including the Boy Scouts of America.) He was an established expert on Mammalogy and Ornithology and made important contributions to the sciences of Ecology and Ethology. Later authors from Ernest Hemingway to Aldo Leopold to David Attenborough cited him as a major influence.

English by birth and Canadian by upbringing, Seton spent much of his early adulthood exploring wilderness Manitoba, sometimes in the company of First Nations peoples from whom he learned hunting, survival skills, and traditional native concepts of land use. By the time of his middle age he had logged more wilderness time than just about any of his peers, but had not explored the Arctic.

He knew about 19th century Canadian explorer George Back and his 1820s expedition north of Great Slave Lake to little known Aylmer Lake, and a later expedition by Warburton Pike. Seton had recommended the spiritual and adventure value of engaging in a six-month wilderness immersion. Taking his own advice, Seton took half a year to explore regions south and north of Great Slave Lake in Canada’s Northwest Territories.

Accompanied by American biologist Edward Preble and by native guides (who themselves had never been so far north), Seton left his family, career and New York society for an arduous adventure between May and October exploring little documented lakes and rivers. His goal was to chronicle the plants and wildlife of the region. Both Seton and Preble kept journals; Seton used them for his book, The Arctic Prairies, published in 1911.