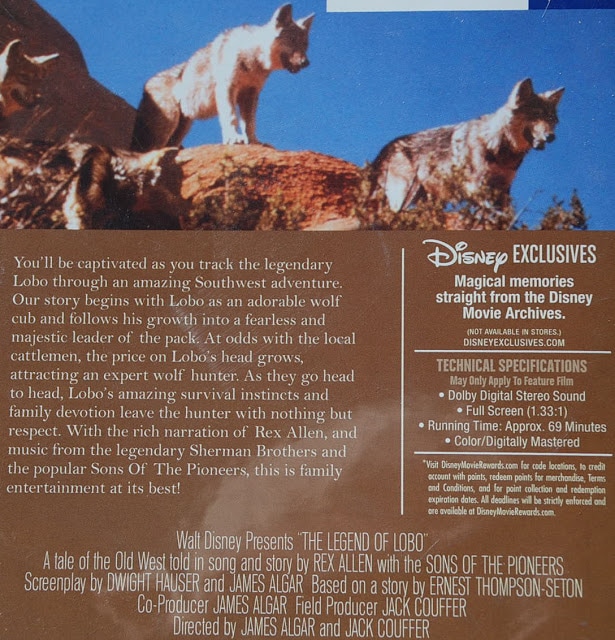 No hurrahs for Hollywood, but Seton’s Lobo story inspired two films.  Clash of the Wolves (1925) starred Rin Tin Tin as “Lobo” in his 9thHollywood feature.  Many years later, Disney released the Legend of Lobo (1962), “A tale of the Old West told in song and story by Rex Allen with the Sons of the Pioneers…Based on a story by Ernest Thompson Seton.”

While the “Lobo” in Clash of the Wolves is not the same one as in Seton’s Currumpaw story, it cannot be ruled out that whatever studio released this picture called its lead character Lobo to take advantage of the name recognition from Seton’s earlier story.  (Rin Tin Tin also portrayed a character named Lobo in a 1929 movie, but I have not seen that one.) The title cards in this silent film give information reminiscent of Seton’s Lobo: “I know that wolf. That’s the famous Lobo.” And: “I’ll give $100 for his hide.” But instead of hunting the wolf, the human protagonist in this one befriends the wounded animal.

This Lobo leads a band of outlaw wolves until he is injured when his foot is pierced by a cactus thorn. (The movie appears to have been shot in a California desert location.) Unable to extract the thorn, Lobo seeks the help of his mate (played by another dog, credited as Nanette in the IMDb notes on the films) in extracting the life-threatening sticker, but no luck there. Knowing that showing signs of weakness leads to death in the wolf world, Lobo attempts to hide his wound, but when it grows worse his fellow wolves drive him out of the pack to die alone. Meanwhile, his mate waits in vain with her puppies for his return.

To Lobo, man is his greatest enemy, from whom he can expect no succor. Against all probability, the wolf is found and brought back to health by a kindly miner who faces problems of his own. Dave Weston (played by Charles Farrell who went on to a role as a minor television actor in the 1950s) is shot by a claim jumper, Borax Horton, who leaves him for dead. Lobo attempts to get help from Dave’s girlfriend May, but both May and Lobo are also threatened by the villainous Horton. Somehow, Lobo manages to get word to his wolf pack which joins him in giving the unfortunate Horton his comeuppance. Dave and May, and Lobo and his mate (Nanette), live happily ever after.

The plot was improbable, but Rin Tin Tin took his role seriously and brought to it the gravitas his audience had come to expect. Or so I assume; I have not found any contemporary reviews by film critics of his time.

According to the IMDb site, at the peak of Rin Tin Tin’s popularity, “Warners maintained 18 trained stand-ins to reduce any stress on their dog star, while providing him (“Rinty”) with a private chef who prepared daily lunches of tenderloin steak (consumed as live classical music was played to help ease the dog’s digestion.)” And: “Trainer Lee Duncan, on the first film he made of the dog: ‘At first the dog did not know he was watching pictures of himself, but when it dawned on him his tail wagged ferociously.’” One can only imagine how proud Rinty must have felt when he learned that Clash of the Wolves had been inspired, at least in some degree, by the popularity of Seton’s story!

In The Legend of Lobo, the unnamed wolf actors (played by actual wolves or wolf-dogs of various ages) go through their Disney paces with faux natural history, lots of cute scenes, some tearful scenes, and even less plot than Clash of the Wolves. At least it featured wolves rather than dogs, but without a compelling actor like Rin Tin Tin, it is mostly a bunch of wolves running around doing wolf things with a voice-over narrator trying to impose some kind of order on pieced together documentary nature footage. The narration is overrun from time to time by the annoying accompaniment of singing cowboys.

Since there is no dialog in this film, we are helped by the wanted posters for Lobo with the price on his head increasing from $100 to $1000. The tale of “The bravest wolf of all” spends half or more of its time on the back story of Lobo’s parents, “El Feroz” the dad and an unnamed mother. Amid several scenes of cute wolf puppies at the den, the narrator interjects the occasional Setonism such as: “All of his life, he (Lobo) would be one to learn from experience, store it up, and remember it.” And: “When the buffalo were wiped out it left cattle as the wolves’ only hope for survival. So El Feroz took what seemed his rightful share.”

As in the original story, the plight of the cattlemen having their livestock destroyed is shown as an important problem while at the same time “a kind of nobelness (sic) in the wolf” is also acknowledged.

The young Lobo goes through various traumas, including getting lost from his parents, surviving a threatening encounter with a mountain lion, trying to support his doomed father caught in a leg trap, and witnessing cowboys shooting his mother after she is caught killing a cow. Seton did not spare his young readers from the experience of tragedy and neither do the film makers.

Contrived scenes of puppy Lobo romping with a baby antelope and the two of them joining a swimming party of baby raccoons probably had limited credibility in 1962 and certainly has none now. The only realistic part came when the young wolf attacks one of the raccoons (ending the scene!). Of greater concern, the director set up actual animal fights, wolf vs. badger, wolf vs. wolf, and showed wolves snared in leg traps. In other places, uncontrived documentary scenes of wolf life were rather interesting.

At the end of the movie, following the random scenes of real or imagined wolf behavior, the producers introduce a story plot: a trapper is brought in to rid the world of Lobo once and for all. He traps Lobo’s mate (in this case a black wolf since presumably a white one was not available) and holds her prisoner in a building at the ranch. Lobo rallies his pack to attack the ranch! They stampede a herd of longhorns who knock over the building thus freeing the female from her entrapment. The wolves happily run off and head out for a new promised land free of humans. The narrator calls it quits at this point. Sadly for the wolves no such paradise exists.

But I would like to give the wolves another chance. I hereby announce that for the next film incarnation of “The King of Currumpaw” I am available to write the screenplay.