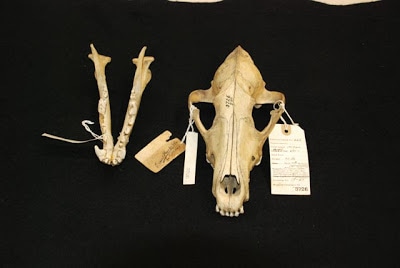 The high ceilinged, dimly lit, quiet hall in Ottawa sees few visitors. Two wolf skulls gleam a startling white against a black cloth background, laid out on a heavy wood table. Howl-less they have been for the past 115 years since meeting their deaths in the traps of Ernest Thompson Seton. Their final resting place is in the Vertebrate Collection in the specimen storage facility at the Canadian Museum of Nature (Collections des Vertébrés, Musée canadien de la nature).

Lobo was one of six wolves happily preying upon defenseless cattle in the closing decade of the 19th century in northeastern New Mexico. Seton named two of them in the original “King of Currumpaw, a Wolf Story.” At the time of their capture, Seton assigned each mammal specimen in his collection a number along with date killed and notes. (He used a separate numbering system for birds.) He began the hunt in mid-October, but did not manage to capture the first wolf until almost two months later. All six caught in leg traps. In order, they were, according to Seton’s field notes:

Two of Seton’s wolf skulls are at the Canadian Museum of Nature. By tradition, the Museum believed the skulls to be those of Lobo (#677) and Blanca (#672), but if the tags on the Canadian collection skulls are correct, then the Museum has two of the others: #655 and #662.

National Museum of Canada tag on #662:

(Seton tag: I didn’t get the information copied from this one, but the number 662 was attached.)

(My notes: Skull, no bullet hole.)

National Museum of Canada tag on #655:

(My note: Skull (with bullet hole) and pelt.)

In an email to me dated September 3, 2009, Dr. Kamal Khidas, Chief Collections Manager at the Canadian Museum of Nature kindly shared with me the “Genetic Analysis of Canadian Museum of Nature Samples” by Professor Robert Wayne of the University of California, Los Angeles, dated October 8, 2007, on the two New Mexico wolf specimens. For Seton specimen #662 the researchers took their DNA sample from a tooth. For #665 they used foot skin from the pelt. Both specimens had the same “mitochondrial control region haplotype” or DNA sequence. This is “a unique sequence not previously detected in extant or historic Canis lupus. This “haplotype is in the same clade as historic Canis lupus nubilus haplotypes” observed also from Colorado, Kansas, and Nebraska, the “interior continental U.S. gray wolves.” To be clear, nubilus was a different species from the Mexican gray wolf, Canis lupus baileyi. I write was, because as far as I know, nubilus is extinct. For our time the question is, will Canis lupus baileyi follow Canis lupis nubilusinto the forever oblivion of extinction?

I recently received a note from the office of New Mexico Senator Tom Udall. One of his staff wrote me that the Senator supports issuing endangered species postage stamps as a way of raising money for international wildlife conservation. Clearly, help cannot come soon enough.

If the wolf specimens in Ottawa really are #662 and #665, then what happened to Lobo (#677) and Blanca (#672)? So far, in my research at least, the record on the disposition of Blanca’s remains is silent. There is, however, a tantalizing clue about Lobo in a letter to Seton from Ms. Caroline Fitz Randolph dated March 13, 1895. Caroline was the daughter of Louis V. Fitz Randolph (who owned the ranch in New Mexico which hosted Seton during his visit) and sister of Virginia Fitz Randolph who Seton met while both were art students in Paris. Seton’s continuing friendship with Virginia led to his meeting her father who sent him to New Mexico where he brought about the death of Lobo and later popularized wildlife conservation. (Seton may have been attracted to Virginia or Caroline or both; if Lobo was the Wolf that Changed America, then an important link in the story was Seton’s relationship to these sisters.) Seton kept the letter from Caroline. It remained at the Castle after his death before being gifted to Library and Archives Canada (along with most of his personal papers) by Dee Seton Barber in 1986.

At last the head of your victim has come, am very proud of it and delighted am I. It is the very best thing of the kind that I have ever seen, and I am already attached to it as the glory of my modest possessions….

Mother[?] says that she can’t bear to meet Lobo’s eye – she fancies that he has a “Mr. Hyde” sort of sneer, a look as though he might be the evil side of a human [ ? ], but for me, I love Lobo. He fascinates and attracts me, and his quaint [ ? ] and [ ? ] charms and satisfy me afresh every time I glance at him. I shall consult Julie [ ? ] before having his mounted and protected. But have a notion of my own that I should like him in a [ ? ] band of plain ebony with a tiny sample rim of gold inside – to signify le rir est mort. Does that sound right and fitting, oh mighty conquerer?

I have said a great deal, but somehow seem to have fallen short of telling you how good you are to me to send me Lobo, and how warmly I appreciate your kindness. I’ve not written [The letter ends at this point, although it must have continued on another, now lost page.]

Caroline wrote on letterhead showing their address as Front Street & Farragut Road, Plainfield, New Jersey. Perhaps the skull of Lobo still resides somewhere in Plainfield. If anyone can find out, I would like to know.