Identity Is Destiny: Charles A. Eastman and Ernest Thompson Seton 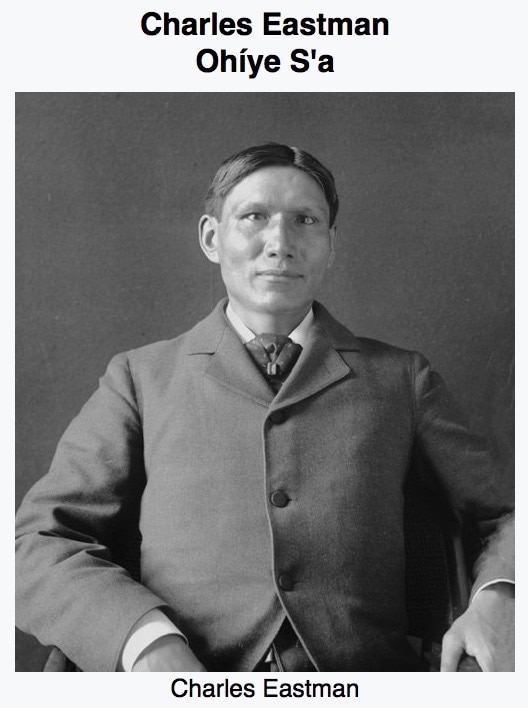 The turning years from the 19th into the 20th century brought new challenges to the relationship between American Indians—white Americans. The entirely traditional pre-European life of indigenous people was over. The shooting wars against the Indians had ended as well, but the horrors of the past were replaced by different forms of insidious racism.

A few white people, such as Ernest Thompson Seton, sought to redefine that relationship. Seton has been criticized for combining (or confusing) cultural appreciation with an equal measure of cultural appropriation. (Sometimes called “colonization.”)

Seton attempted through lectures and writings to shift the feelings of hatred felt by nearly all white people towards indigenous people. He began by extolling the virtues of traditional Native cultures, and later added to his educational goal an advocacy for the rights of contemporary Native Americans. The historian Philip J. Deloria has shown how the words of white allies could be contradicted by the actions of those same allies. In the case of Seton, his promoting “playing Indian” by white children contributed to the reinforcing the stereotypes he opposed. (This phrase also gave Deloria the title for his important book of the same name.)

Which brings us to Charles A. Eastman (Santee Dakota) who was two years older than Seton. Raised a Sioux warrior named Ohiyesa, he left that life (by direction of his father) at the age of fifteen. Thrust into the white world, he pursued formal education leading to his becoming a medical doctor. (He treated victims of the Wounded Knee massacre.) In the decades that followed he became a popular writer as well as an administrator for the Bureau of Indian Affairs. As a leading Native American intellectual, he became a pioneer in how indigenous persons might navigate the alien white world that dominated North America.

Seton and Eastman knew each other for decades. Each appears to have influenced the other. Eastman served as one of Seton’s guides into a deeper understanding of Native American history and philosophy. (See his The Gospel of the Redman.) Seton appears to have encouraged Eastman’s existing enthusiasm for youth education through connecting him with the Boy Scouts. (See his Indian Scout Talks: A Guide for Boy Scouts and Camp Fire Girls.)

Anyone who lives long enough in historical memory will find the values of his/her time rejected by a later generation. Current reappraisals of both Seton and Eastman provide case studies.

Both Seton and Eastman rejected the policy of “assimilation,” summarized by General Richard Henry Pratt in 1892 as “kill the Indian, and save the man.” (Pratt ran one of the infamous “residential schools” for tribal members.) This plan, combined with the Dawes Severalty Act 1887 (Cleveland administration) meant to eliminate indigenous sovereignty through the destruction of tribal culture and the elimination of communal tribal lands. The resulting “Indian” would be an individual disconnected from his past to become tamed and Christian.

Eastman and Seton also rejected the “vanishing race” myth, also informally called the “vanishing Indian,” referring to the predicted coming extinction of Native culture. (The concept came from the 19th century but was named by photographer Joseph K. Dixon in the 20th century.) The great question for Eastman was: how does a contemporary Indian survive in the white man’s world while also holding onto his Native identity? For Seton, the great question was how to incorporate Native American heritage into a greater American identity? While not exactly the same, the questions are not mutually exclusive.

Eastman has been criticized for his acceptance of acculturation. Seton has been criticized for cultural misappropriation. The criticisms are fair. But for just a moment, put yourself back to the beginning of the 20th century. We find two men, one Native, one an immigrant, trying to find their uncertain way through the morass of four hundred years of horrific history. We’re all here 528 years later still trying to untangle it all. A hundred years hence, how will our actions be reviewed?