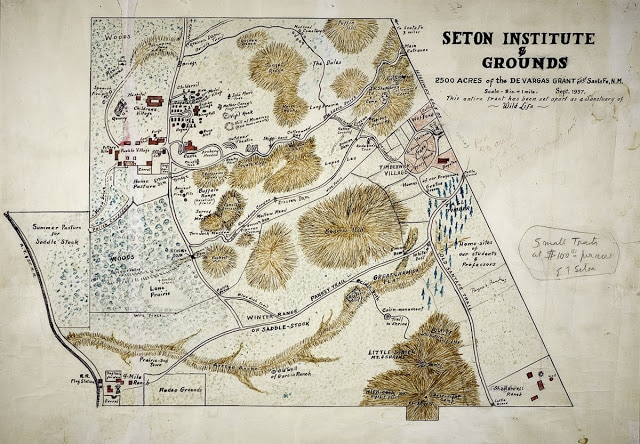 October 8, 2012. Perfect autumn day, clear sky, light breeze out of the Southwest, temperature around 70°F (21°C) near summit of a hill Seton called Little Sister Mountain, a prominent point SE of the Castle and nearly 500 feet (152.5 meters) higher. The ruins of Seton Castle must be visible from here (since the peak is visible from the Castle), but I simply cannot make it out. I forgot to bring binoculars or compass. At least I remembered to show up for my appointment with two Seton Village neighbors, Marita Prandoni (who lives not far south of the Castle) and who works for the Academy, and Jerry Zollars who lives right by the Castle. Jerry has made extensive studies of Seton’s second New Mexico period (1920s-1946), reading all of Seton’s journals from that period. 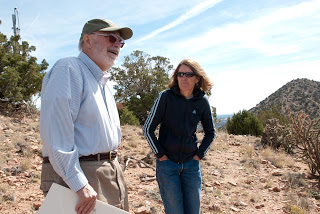 I asked the two of them to help me identify place names from Seton’s 1937 map of his 2500 acre property on the DeVargas Land Grant. A number of high spots near the Castle – such as Sunset Hill, Raven Rocks, and the Hill of Memories, now support houses. 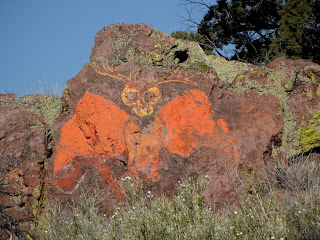 One particularly mysterious place is the “Piasa” cliff with its strange painted creature, part insect part something else with antlers. First painted by Seton, it was later maintained by his family, holding up rather well. It is based on a (now lost) rock painting from a cliff along the Mississippi River in Illinois first described in the 17th century. Apparently Seton was aware of a replica of it that existed in his time. What meaning it held for him, if any, is unknown, although I suspect its appearance on a cliff along Seton Village Road was purely whimsical. Due to tree growth along the arroyo, it is not easily spotted. The history of Piasa was discovered by my longtime research associate, Bob Hare. For more on his other discoveries in nature, history, art, and philosophy, see Wilderness Adventures with Bob Hare.