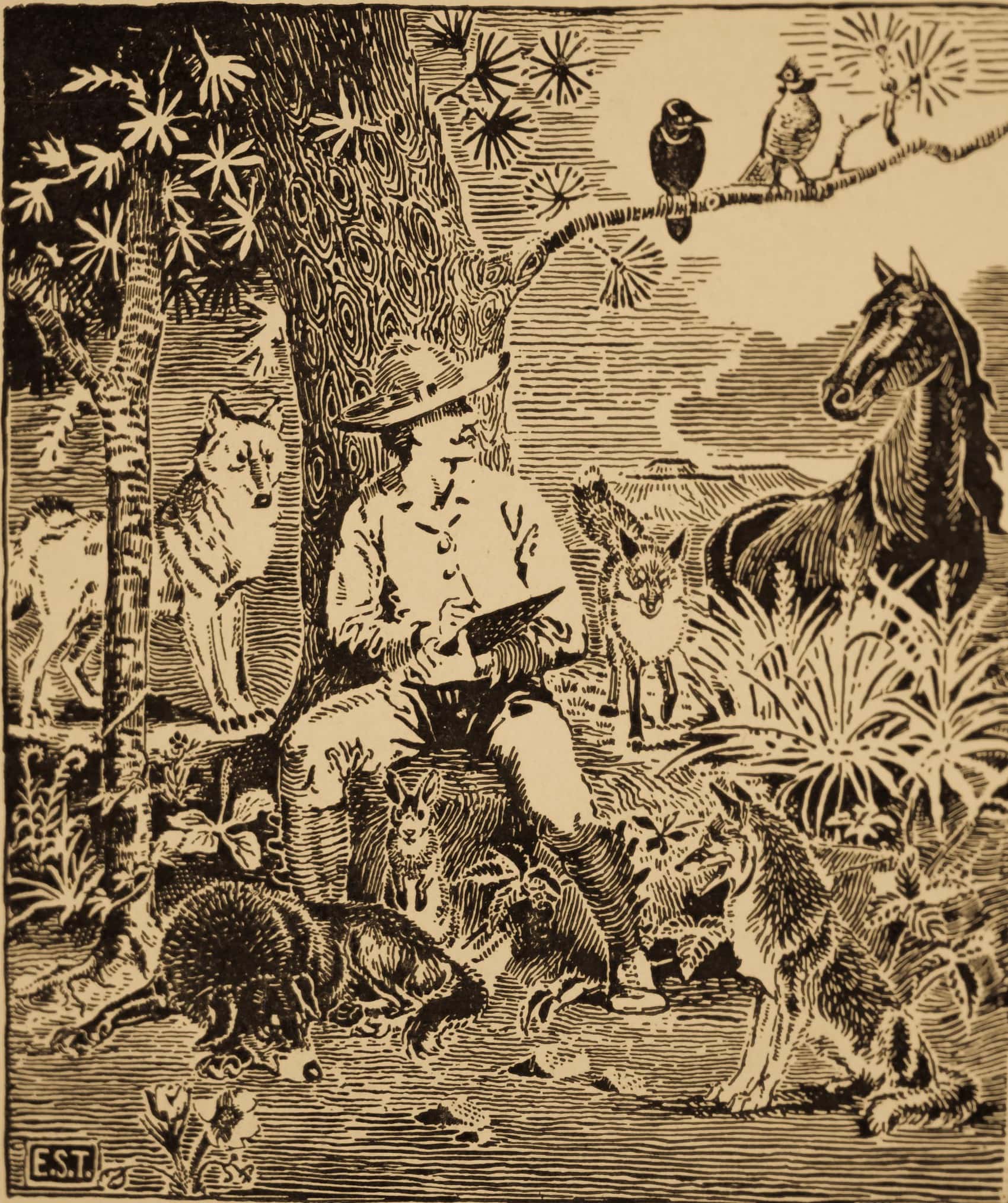 Ernest Thompson Seton had an extraordinary influence on the world during his lifetime. Here are highlights. Detailed consideration for each section will be found elsewhere on this site.

At the turn of the 20th century a misconception about wild animals (mammals and birds mostly) held general sway. The belief was that wildlife (and domestic life as well) did not experience feelings (from pain to love) as do we, but operated behaviorally on instinct alone. Starting with the story of Lobo, Seton took a different view: animals also learn by watching others and by personal experience. This leads them to feel a range of emotions, different by degree only, but not fundamentally difference from ours.

Seton was denounced as a “nature-faker” for taking this position. He has been proved correct over and over. See the recent PBS Nature program “Animal Reunions” for more on animal emotions. If it doesn’t bring tears to your eyes, you’re not understanding Seton’s most important contribution.

A few years ago I had the honor of being invited by the Defenders of Wildlife to travel to Washington, D.C., to take part in their annual citizen lobbying event. We met with Senators and members of the House of Representatives to promote various topics of environmental protection. I asked several Defenders officials about their knowledge of Seton—I have brought him up to the staff of other organizations as well. Mostly, they never heard of him.

At the beginning of 1898 there was no national wildlife conservation movement. By the end of 1901, the movement was underway because of Seton’s books and national lecture tours promoting the concept. Credit has rightly been given to John Muir and Theodore Roosevelt for their efforts in pushing the Federal government to preserve land for the benefit of nature. But wildlife conservation itself, one of the foundations of environmentalism, was first pushed by Seton.

3 Outdoor Education Through Scouting and Woodcraft

Seton is best remembered as a founder of the Boy Scouts of America. He was given the honorary title of Chief Scout. He wrote the first Handbook and over a period of nearly five years starting in 1910, became the most important public spokesperson for the movement. The foundational idea of Scouting actually began years earlier.

On a weekend in late March 1902 (probably the 28th and 29th) Seton invited a group of boys for a camping, storytelling, and physical activity experience at his estate outside Greenwich, Connecticut. By May of that year, Ladies Home Journal (the highest circulation magazine in the country) began running a series where Seton outlined his ideas for outdoor youth education. At the beginning of July, the first official camp of the “Seton Indians” took place in New Jersey.

This became the foundation both for Seton’s Woodcraft movement and for what would become (after 1908 when Robert Baden-Powell adopted it) the world-wide Scouting movement.

Seton’s autobiography—Trail of an Artist-Naturalist—gives insight (as it should!) about how he thought of himself. Notice that he gives “Artist” pride of first place. From the time of his teen-age years, as he cast around trying to figure out what to do with his life, he came upon the idea of selling natural history specimens to museums and taking on commercial art projects. In his 25th year, Seton received an important commission providing illustrations to the multi-volume Century Dictionary. Over the next ten years he established himself as a leading wildlife artist (the leading wildlife artist, I believe) of his generation, creating drawings and paintings for his books and for books by other writers. Thousands and thousands of images.

He was simultaneously writing magazine articles, short stories, and short pieces for scientific journals—hundreds of them. Some of these pieces, plus new work, became the basis for the approximately forty books he eventually published. (See “Seton Annotated Publications” elsewhere on this site for a complete list of major works.) Seton’s 1898 book, Wild Animals I Have Known became an international bestseller, establishing him as a leading literary figure, and also as an important celebrity in the early 20th century. Many of the books are still in print with new editions of them coming out. Total number of copies sold probably number in the millions.