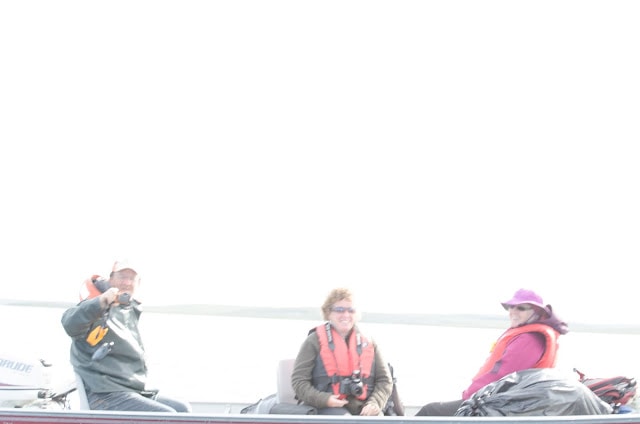 {In late July and early August 2015 I led an expedition to the Arctic region of Canada’s Northwest Territories researching the Ernest Thompson Seton and Edward Preble expedition of 1907. We followed their route around Aylmer Lake located northeast of Great Slave Lake. Field notes from the expedition plus photographs are presented here in several separate entries. Additional essays about our journey can be found at the Seton Expedition website and
at davidlwitt.com. An exhibition and short film about the 1907 and 2015 expeditions will be premiered at the Seton Gallery of the Academy for the Love of Learning (sponsor of this project) on August 14, 2016.}

Morning low temperature: 45°F (7°C)
9:33am We began return trip south on smooth water, starting down west before cutting across to Rocky Point on south end of the crescent shape island, arriving 12 noon. There is a lovely beach there and deep water port coupled with isolation from bears and an anti-mosquito breeze coming in from three sides.
12:43pm Returned to Lodge.
I made a 40 minute canoe run with Thomas along the shore in front of the Lodge from which we watched dramatic sunset. I have not mentioned, but while at the Lodge, I spent a great deal of time writing and processing photographs, staying late, starting early. The mosquitoes seemed not to have liked the main building. The insects were largely absent from in there, unlike the small cabins where we slept (Thomas and I in one, Michale and Patty in the other). Fierce mosquitoes in our cabin—the worst night of the trip for me and the only time when I had more than enough of them. Seton claimed that except for the mosquitoes, blackflies and their ilk, the North is a paradise for its overwhelming rugged beauty. At times, the buzzing pests make it a misery.

I took an early morning walk on the Lodge’s beach along Rocknest Bay. All too soon this trip which I had waited a lifetime to accomplish would be over. I looked closely at the beach boulders and “farthly” at the distant hills and the long, long expanse of water.
9:25am Flight out of Rocknest Bay, returning to Yellowknife. #5700 Rocknest Bay from the air. Saw one forest fire on the way back. Smoke haze over sky; smell of forest burning penetrating the plane, 20 minutes into the 1.5 hour flight.
Arrived Yellowknife. Visited I took part of the Legislature building tour; Thomas and Patty completed the tour. I visited the Prince of Wales Northern Heritage Center (museum); Patty and Thomas arrived later; Michale had seen this interesting place on her first day in YK. The four of us met for lunch at the Black Knight Pub and again later for dinner at the very popular Bullocks Bistro (white fish, bison, both very good; Yukon Red beer quite good). We got a ride there from new friend (Ms.) Tracy Therrien, director of the Yellowknife Visitor Center. (She had met Michale the previous week.) Tracy took us on driving tour of the more eccentric and interesting neighborhoods. YK is clearly a very creative place.
Satellite text from Bruce Bembridge: their group reached Lockhart River before we left Aylmer. Had I kept to our original itinerary, we might have come across them. They saw 40 Musk Ox near Lockhart or somewhere else. We managed to see no large mammals at any time during the trip. Reports heard on the decline of Caribou population alarming.
Late evening solo walk around YK.

Short walk about, then onto YK airport. Flight to Calgary seating next to YK resident a bit younger than me; more insight into the mystique of “the North.” Several layers of customs to negotiate at Calgary, but no waiting. Then airport closed by storm; resulting 4 hour delay caused us to miss our Denver connection to Santa Fe. Patty and Thomas came up with alternative plan, getting us onto exit row (roomy) seats on flight to Albuquerque where Thomas rented a car (Ford “Edge”) to get us back to Santa Fe airport.
Feeling awake, though not terribly alert, I drove home, arriving just before 3am on Thursday August 6.
I wrote three essays during the trip on trio of related subjects: Contrasts (paradox comparisons). Scale (size comparisons). Passages (time/change comparisons).
I had been thinking about doing this trip for 42 years. It was made possible by the
Academy for the Love of Learning with logistics and guide support from Aylmer Lake Lodge. Weather was great (no storms). I could not have asked for better, more congenial and hardworking companions. More follow up to come in subsequent postings.