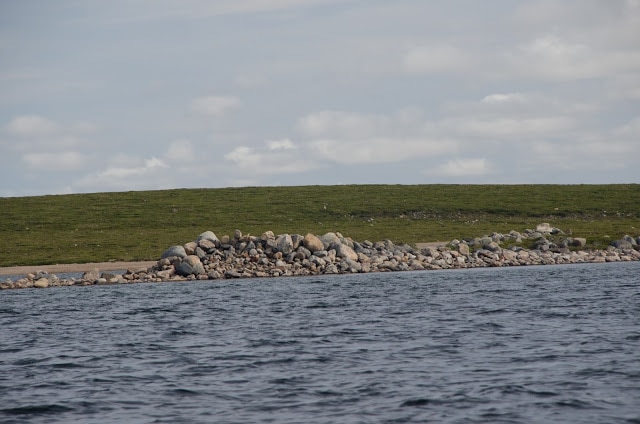 {In late July and early August 2015 I led an expedition to the Arctic region of Canada’s Northwest Territories researching the Ernest Thompson Seton and Edward Preble expedition of 1907. We followed their route around Aylmer Lake located northeast of Great Slave Lake. Field notes from the expedition plus photographs are presented here in several separate entries. Additional essays about our journey can be found at the Seton Expedition website and at davidlwitt.com. An exhibition and short film about the 1907 and 2015 expeditions will be premiered at the Seton Gallery of the Academy for the Love of Learning (sponsor of this project) on August 14, 2016.}

Up at 7am. 9:50 Pushed off from Aylmer Lake Lodge for Sand Hill Bay. We traveled the east shore of the lake. Seton, starting east from the Lockhart, paddled up the western shore of the lake, stopping for a meal on an island along the way. Later, on their way out of Aylmer, they came down south along the east side. Which is to say that we did our Sandhill Bay trip going in the opposite direction going out; on the way back we returned part way along the west shore; in so doing we saw most of what they saw in 1907, but from the opposite direction.
10:20 Going north on Aylmer, we looked north to see the spot on Seton’s map marked “Sandy Bay.” 10:38 Reached narrow passage between Harbor Island (Seton’s name for a large island in Aylmer Lake) and the mainland (east side of lake). #5347 (11:00am) “Stony Pt.” on south end of Crescent Island (my name) looks like a man-made constructed jetty from the south, but it was constructed by a glacier; at either end of this north-south running island are the entries to Carpenter Bay, probably shallow although we did not investigate.
Continued north to “Wolf Den,” a scenic point on the opposite shore (to the north, mainland) from the north end of the Crescent Island. We landed and looked around ca. 11:20am – 12:20pm. The little cave is easily spotted from the water as we pulled up to the only landing area.
Location: N 64°14’ 57.2”  W 108° 27’ 45.4”
Wolf den does not appear to have been recently inhabited by wolves. We found a few Caribou bone fragments inside and nearly the entry of the mossy-floored cave. The cave goes in less than 5m but is well protected from the elements. Dense tundra vegetative cover around the base of the bare granite boulder outcropping that forms its house sized roof. (Wolves lived there or had just moved out in August 1907.) From there we boated north through very shallow water to emerge eastwards from between to islets. With not much more lake level drop, the two will become one.
Location, taken offshore: N 64° 16.0’ 14.2”  W108° 28’ 43.8”
Water temp: 10.0 – 11.0c (50-51° F)
Coming into western end Sandhill Bay (northernmost part of Aylmer Lake) we could see a prominent rock on the western sandhill (Tent Ring Hill in my nomenclature). Although it stood out, when we later that evening climbed up the hill, this was not a cairn, but a single unimpressive boulder, much smaller than we had guessed. Seton built his cairn (as we were to learn) in a place where it could not have been seen from Aylmer.
1:53pm We landed on an arc of beach protected by shallow water and large flat stones just below surface level; careful navigation required to get in and out. We found fairly fresh Wolf, Caribou and Musk Ox tracks. Also bear tracks. Two depressions in shoreline/tundra edge sand, one much larger than the other plus two piles of blueberry infused scat, one much larger than the other, showed the presence of bears on the beach (apparently they had been sleeping next to one another): mother & cub. According to Kevin they were present within the last 2-3 days. There is a sort of wildlife highway along this beach although empty of animals during our stay.
Kevin, Patty, Michale went out fishing during the afternoon. Thomas and I followed in the other boat, drifting part of the time when we should have been making a more thorough reconnaissance of the shore looking for Seton’s Sandhill Bay camp which probably not (as I figured out later) where we camped. We traveled east to a large island in the bay, then slowly returned to our camp. Kevin cleaned fish caught by Michale and Patty, leaving entrails and head for the resident falcon.
After dinner we headed out for summit of west sand hill which we attained at 9:05pm (with Kevin remaining especially watchful in case the bears were still around, which they were not). Found 7 old tent rings on the summit (and 3 more lower down on the summit ridge to the north) along with tumbled down Seton cairn—undermined by “sic-sic” (Arctic ground squirrel) tunnels. Seton built the cairn between two closely adjacent rings. He used stones from both rings to create his monument. His structure was still standing when documented in the early 1980s. Apparently Seton and Preble believed these rings to be of recent origin. According to Morrison they were prehistoric.
We took still and video pictures from the summit in all directions, capturing the usual dramatic sunset. One of my videos shows the less than 1k (1094 yards) distance between Aylmer Lake the Back River.
Location: N 64° 25.0’ 38”  W 108° 27.0’ 4.0”
Bay of Back River (mid frame) with unnamed lake (behind beach camp) in foreground; more of Back River behind.
Place names from Seton map photographed today: “Stony Point” (on the feature I call Crescent Island. “3 Hill Peninsula” (east of Wolf Den). “Wolf Den.” “Pyramid Point.” “Sandhill Mountain” (the island in Aylmer, not the high point in the Narrows). “Boulder” (east side, mainland, near the entrance to Sandhill Bay). “Sandhill Bay.” Unnamed west sandhill esker (which I call in my notes Tent Ring Hill).

Little sleep. Awoke at 5:15am after dead still night. Morning—had the beach to myself for a considerable time. Wrote another essay for Academy for the Love of Learning blog documenting this trip. Kevin made bannock for breakfast—using an iron skillet atop an  oversize propane stove. The 1907 group must have had iron skillets, cooking with wood where available; they found willow wood north along the Back River, but none at their camp. As at the Lockhart, willows live here now, although of small diameter.
We left the beach camp before 10am, crossing the tundra going easterly until reaching an area of esker hills overlooking the demarcation line of rocks between Sussex Lake and Back River. 11:45am reached the river where a very strong current from the lake is channeled into two or three powerful flows between the boulders. I thought that Seton and Preble had passed this way, but a later more careful reading of the map showed their crossing of the Back River much further north. They made at least three or four hikes from the beach, including one that led them east to a height above Sussex Lake. But they did not get as far east as we did; we did not get nearly as far north as they did. As a result, I missed the chance to get farther north but led us to a discovery of our own. The sand eskers defining the south edge of the Back River were extraordinarily beautiful.
I felt this lake/river intersection was an especially powerful place and was transfixed by the feeling of it. I believe that everyone in the group felt this was the most special place we visited. (George Back, who passed through here in 1833 called this river, in English translation, by its Indian name, the Great Fish River.) Sadly, no one thought to bring along a fishing rod, so the great fish remained unmolested. We remained in this area for much of the day, walking part of the time, but with a long interval of just being. Thomas, Patty and I selected separate high points from which to contemplate the majesty of it all. Michale and Kevin staked out a separate high point at the east end of the esker directly above Sussex Lake.
Location: Sandhill Bay beach camp 1188’ N 64° 29’ 50.9”  W 108° 27’ 32.2”
Location: Back River crossing, south side N 64° 25’ 21.2”  W 108° 24’ 14.9”
Confusingly, the main body of Sussex Lake drains southward. The Back River begins at the lake’s southern end, running west through a canyon, then opens out into a large bay before narrowing again and heading north to Arctic Ocean. Its next opening is the head or south end of Musk Ox Lake. Preble crossed over the Back River around where the Icy River enters from the west just below that lake. Another way to put this is that the river runs south, then west, then north in a giant U-shape.
We walked the length of the south shore esker ridge most of its length from above Sussex Lake to its transition at the large bay before the Back River turns north. The distance from the head of Back River west to end of esker is approximately 1k. From that ridge it is possible to see Tent Ring Hill. Approximately 11k (6+ miles) covered today. Worth every hot minute to see the esker canyon of the Back River.
The Back River continues to switch directions but eventually ends up in a large bay of the Arctic Ocean after passing over more than 80 rapids. Canoeing the stretch from Sussex Lake to Musk Ox Lake likely possible without too much difficulty. A goal for next time!
Note: The Back River drains northward; so does the Lockhart. Aylmer Lake is part of the greater Lockhart system. The Lockhart is a tributary of the massive McKenzie River system. The Lockhart enters Great Slave Lake from its east side. The McKenzie system eventually goes northward into the Beaufort Sea, part of the Arctic Ocean, but farther west than where the Back River enters.
4:20pm Returned to camp. Beach temperature 83°F (30°c) Temperature felt much hotter on the tundra. Much too hot for the Arctic.
Kevin, Patty & Michale went out fishing from the boat once more. Thomas and I stayed onshore with the gun. This was my first and only day of the trip of not once being on he water in a boat. On the beach, non-biting black flies hit tent and jackets so hard as to sound like light rain.
8:15pm Wolves heard, SE somewhere on Sandhill Bay shore or from surrounding hills. Far away but still clear.