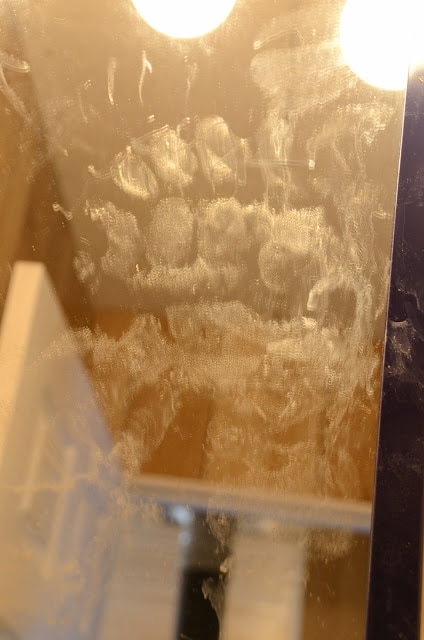 {In late July and early August 2015 I led an expedition to the Arctic region of Canada’s Northwest Territories researching the Ernest Thompson Seton and Edward Preble expedition of 1907. We followed their route around Aylmer Lake located northeast of Great Slave Lake. Field notes from the expedition plus photographs are presented here in several separate entries. Additional essays about our journey can be found at the Seton Expedition website and at davidlwitt.com. An exhibition and short film about the 1907 and 2015 expeditions will be premiered at the Seton Gallery of the Academy for the Love of Learning (sponsor of this project) on August 14, 2016.}

8:15am Smooth ride all the way from YK. Aylmer Lake finally within view—an exciting moment for me to recognize features on the north shore of the west arm of the lake. I recognized Thonokied River delta, Williamson Island and the peninsula east of the island on the way in (from the southwest, I think). Even more exciting: circling over Rocknest Bay, and then making a water landing off the shore of Aylmer Lake Lodge. A glorious moment after 42 years of imagining coming to the lake. The Lodge is situated so as to look directly south to the narrow strait leading into Aylmer.

(Seton canoed past the entrance to Rocknest Bay; whether or not he entered it is unknown.)

Outfitter and guide Kevin McNeil met us at the dock against which the pilot had expertly guided the plane; we immediately began the unloading.  Everyone shares the work without need of instruction. We had hardly touched the sand when Kevin told us about the Barrenlands Grizzly who had rampaged through the Lodge buildings, causing by his estimate, $40,000 in property damage. The bear had entered every building and placed a single paw print on every mirror, breaking a lot of things, but no mirrors. One paw print was not washed off the mirror in the main lodge so that we could see it.

The bear decided to break in once more while Kevin, a professional hunter, was in the building. He told us the story of how he saw the bear walking around outside the building. He lost sight of the 400-pound (181kg) animal (typical weight for adult males around Aylmer) then heard it breaking through the glass storm door into the laundry/storage area. He grabbed his gun and headed for the main door as the animal was breaking through. Kevin kicked the door shut while he loaded the gun, and then reopened the door.  The bear kept coming forward with no intention of stopping; the experienced outfitter blew its head off with a high-powered bolt action rifle at point blank range. He informed the wildlife authorities (who didn’t bother to ask if the bear had harmed anyone) and later took the carcass to a small nearby island for disposal. This took place on July 16. Bears are loners, so no others were likely in the area; we gave no further thought to the threat while at the Lodge. Mosquitoes were another matter.

A wolf had been spotted two days earlier but at a considerable distance away on the Rocknest Bay shore. That wolf or another would howl at night (near dark, but not total dark in late July) near the Lodge on one of the nights we were away camping.

{Kevin has spoken to wildlife biologist (Mr.) Dean Cluff of YK: Maybe we should track him down and get an interview about what is happening with area wildlife.} 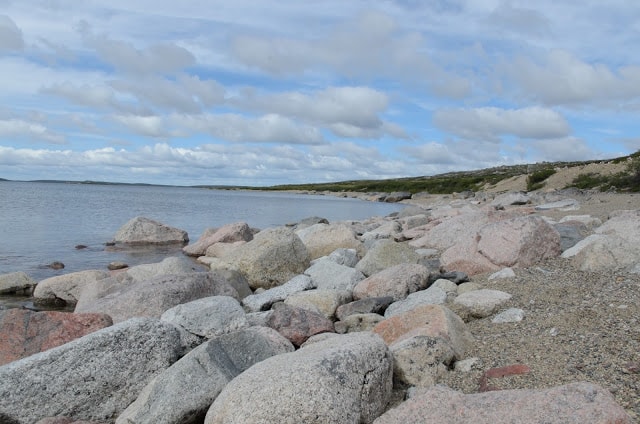 According to Kevin, Aylmer Lake is one of the two most pristine regions in the NWT. There has been no commercial fishing or native net fishing in the lake or its surrounding waters. The fishermen we traveled here with caught several fish during the afternoon, keeping 3 large ones for dinner. Kevin gave an impressive demonstration of how to fillet lake trout which I captured on video, a familiar experience for Kevin who has appeared on TV many times. We had fresh fish for dinner each night at Aylmer except one.

We learned during discussion at the Lodge dining table that part of the Aylmer Lake region is under consideration for inclusion in a National/Provincial Park that would be three times larger than Banff NP. The immediate area has not been hit by fires. More rain has fallen here than elsewhere in NWT, but it is still much drier than normal. Aylmer may be at a record low level. Water level down at least 2’ (.6m) throughout NWT according to Kevin. (Small pond in front of Lodge lost water during our week there, draining through sand into the bay as the water table continued to drop.) 400 large(?) fires in NWT last year due to extreme drought. Everyone worried about this year.

Climate irony: Aylmer Lake was frozen until the 3rd week of July 2014 at the same time that forests were burning to the south. This year lake unfroze unusually early, in May.

Lake and rivers contain lake trout, Arctic Grayling, Arctic Char, White Fish and other species. Our meals during the trip would be of Lake Trout with only one Arctic Grayling caught—nearly all our fishing was on the lake, not the rivers. ETS particularly favored White Fish that we did not get to try. The water is too clear for pike.

Aylmer Lake Lodge was established ca. 2003 by a caribou hunter who scattered spare ribs (his favorite food) not far down the beach to attract wolves and bears. The caribou soon gave out due to successful hunting and that owner went bust, victim of his own deadly success. Kevin reopened the lodge in 2013. Not many visitors so far, but that could change when word gets out about this place. The Lodge is very rustic with only a single outhouse (maybe more next year), although the Lodge and outlier cabins have electricity. This will not become a hunting lodge; Kevin’s plan is to promote it for fishing (plenty of fish) and eco-tourism (grand, wide scenery). During our trip I had him take us to the far west and north ends of the lake where he had never visited. More fish, more scenery. At best, summer lasts only 2 months here, but with lots of light.

In Alberta, Kevin is a hunting outfitter; no meat is wasted, anything not taken by the white hunters goes to native villages.

Patty and Thomas took a canoe excursion SE across the bay while I sat writing in a beached fishing boat. They worked with the wind and moderate waves both ways to make good time. Following the canoe voyage, Patty decided to try her hand at fishing (and soon, Michale did as well). Neither of the women had much experience at this. Both would end up catching our dinner on several nights, becoming hooked on fishing. Kevin made both of them purchase the required fishing licenses. Lodge provided all equipment. Catching our dinner became an important part of recreating the Seton experience. 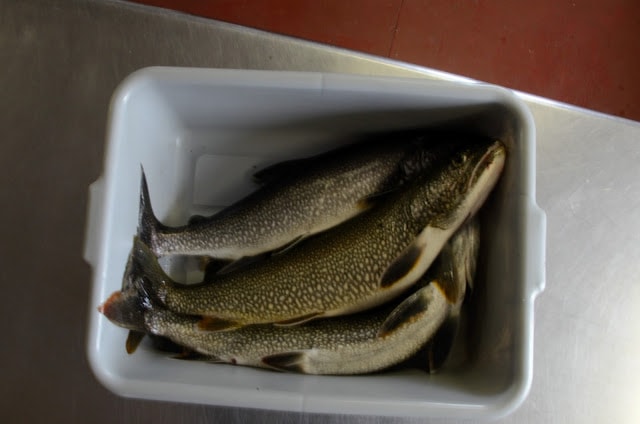 We had, on different days, fried Lake Trout, poached Lake Trout, Lake Trout steak, Lake Trout sushi, and Trout Salad (like chicken salad). First night included the filleted trout, frozen vegetables (they were hot when reaching the table), fried potatoes w/onions, lettuce & veg salad, berries w/whip cream. Kevin’s fisherman friend Terry made most of the Lodge dinners. Terry did a fine job, particularly given the limited fare available since a large part of our groceries remained in YK during our stay at Aylmer.

Kevin strongly recommended that we travel first to Thanakoie Narrows and last to Sandhill Bay—the opposite of my plan. Reason: An end of trip storm could make getting back on time from Lockhart River over the open lake impossible. A stormy day coming back from Sandhill Bay would not present the same challenge since we could hug the shoreline. However, by reversing the plan we would lose any chance of meeting up with the Clark expedition, meeting them part way through their 1000k canoe trip. I went with Kevin’s plan. (The Clark group did reach the Lockhart River right on the original schedule when of course, we were elsewhere.)

I recalled how ETS was storm bound more than once during his Aylmer visit, although that was later in the short season of a colder year. Our weather was perfect, the lake calm. Should have stayed with my well-thought out plan.

Retired to cabin for a bit of reading at 11:10pm while it was still light. 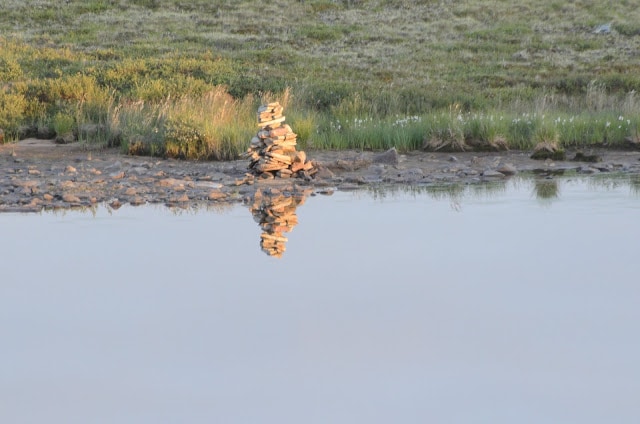