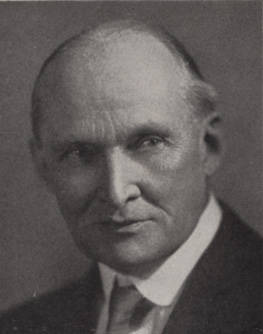 In April 1910 the YMCA loaned one of its top executives, Edgar M. Robinson (1867-1951), to the newly formed Boy Scouts of America (William D. Boyce, founder) as its first manager. Robinson recruited well-heeled businessmen for the Executive Board, and Ernest Thompson Seton as BSA’s most visible promoter. He already knew of Seton’s youth education work as well as his role in the creation of Scouting (the beginnings of which date from 1902.)

Decades later (1941), Robinson wrote a remembrance of Seton, “One of the Most Unforgettable Personalities I Have Known.” The document is 32 pages. Here I have excerpted a few passages. In a separate posting I will explore Robinson’s view of the origins of the Woodcraft and Scouting movements. (His views are aligned with those of Seton who felt he had been unfairly written out of Scouting history.)

Robinson seems to believe that the truly creative among us are inherently non-conformist, a trait he particularly admires in Seton. This, however, comes at a price—sometimes a terrible one—where the genius creator misses the approbation of his contemporaries.

I have read through two versions of Robinson’s manuscript. He seems to have had a fear of or an unfamiliarity with the concept of paragraphs. I have added breaks in a few places to enhance readability.

I am indebted to the Archives and Special Collections, Springfield College, Springfield, Mass, for access to materials on Seton and Robinson. This document is: MS505, QH31.S48 R6 Rare Books Collection.

(Pg. 1) Nearly forty years ago, Mr. Ernest Thompson Seton walked into my office in New York about noon. He introduced himself and invited me to step over to the Waldorf Astoria Hotel and have luncheon with him and a talk about camping. With alacrity I accepted the invitation, for in those days, lunching at the Waldorf with so distinguished a man was not an every day occurrence with me. It was a memorable occasion.

He told me about his experiments with some boys at his home place in Cos Cob, Conn. At that time I was serving as the Boy’s Work Secretary of the International Committee of the Young Men’s Christian Association, and had the idea that I knew something about boys and camping, but I quickly saw that Mr. Seton had some ideas that were quite new to me so I listened with both ears wide open.

(Pg. 7) I well remember the first time that I saw fire produced by rubbing two sticks together in the primitive way. I was in the Smithsonian Institute in Washington. The curator took some rubbing sticks from one of the exhibits there and asked Seton if he thought he could produce fire from them. Seton said he was willing to try. He took off his coat, and quickly, with his pocket knife, trimmed the end of the stick to make it fir more satisfactorily in the socket of the other stick. Then fifing the bow to the spinning stick, he produced smoke, spark and fire in an incredibly short time.

Many times since then, I have seen him light the Council fire with rubbing sticks. Once I heard a very prominent man ask him, “What is the use of lighting a fire that way in these days when matches are so cheap and plentiful?” This man represented a great majority who live in these days in their prosaic, humdrum world. Seton stands out as one who at will could live in those days, in a picturesque world of idealized realism.

One who ever saw him in a Council ring at night in the woods, amid breathless silence, with dignified and impressive gesture light the ceremonial fire by this primitive method, could question why. It would have been a spiritual let-down in that setting for some rash person to step forward and light that fire by striking a match. The match did not belong in that setting. Round the Council fire we were living in those days not these days.

(Pg. 29) I have been entertained in six different houses that Seton has built; three in Connecticut, and three in New Mexico. No one of these houses resembles another. All defy architectural tradition, yet all are practical, and to me, beautiful. Seton says nature abhors a straight line and a flat color, for her lines are curved or crooked and her colors are mixed, or mottled.

So when he builds a house, he follows nature rather than convention. He sees no reason why a ridge pole should be straight, for a graceful curve looks better to him. He sees no good reason for laying slates on the roof in even rows, and of the same color and shape, so, with many colored slates of many shapes and sizes laid on irregularity, and with broken corners, he produces the mottled effect, producing in his crooked, irregular roof a thing of beauty.

He sees no good reason why any two sides of a house need to be painted the same color, nor why any one side should be all of one color, so I discovered one side of his house in a rose color at a lower corner, fade away into cream or buff color in the diagonal corner. Another side of the house started with pale green at one corner, flecked with spots of yellow, and faded into a delicate yellow flecked with tiny green specs. The whole effect revealed the spirit and the handiwork of an artist.

(Pg. 29) Seton is not only unconventional in a passive way, but he is in open rebellion against any conventions that to him seem absurd. He is absolutely fearless physically and spiritually.

He is an individual who towers above the crowd and refuses to be lead by any mere majority vote. It has been said the “bull in a china shop” that there is nothing bad about the bull, nor anything a bad about the china shop, but merely a bad combination. Seton in the woods, unhampered and unrestrained, was magnificent but placed in a position where he was hemmed in by convention and regulation, and where a strong committee with various points of view had to be convinced before he was free to act, was quite another matter.

Give him a free hand in building a house, and he will develop the kind of house that never was seen before, and it will be efficient and economical and beautiful. Given a free hand in an organization that he could dominate and control, an original and effective program would be developed, but tie him down to any stereotyped program, no matter how good and he was not happy.

(Pg. 30) His ideas came too freely to be fitted into any semi-rigid scheme. He could change him mind in the twinkling of an eye. Something would arrest his attention and a new idea would spring into being. I am not sure that I know what is meant by “dynamic equilibrium” but there was about him that suggestion of a dynamic power held in leash, that might break loose.