Beginnings, How Seton Came About 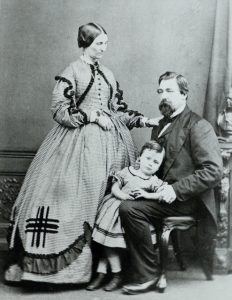 Seton, age 2, with his parents

In my work as an historian, I am generally more interested in finding meanings than in establishing dates. (“In 1492, Columbus sailed the ocean blue.” Maybe so, but that tells us nothing about the implications of that action). Nonetheless, setting out an array of facts and figures associated with the subject is essential as an introduction. So here goes.

Ernest Evan Thompson (b. 1860) was the ninth of eleven children born to Alice and Joseph Thompson. He was Alice’s eighth son. Ten of her children, all males, survived into adulthood, a remarkable accomplishment for the time. Her sole daughter died at the age of six. Although she and her husband lived in England (in the northern town of South Shields), she (and Joseph) was of hardy Scot stock, living well into old age. (I’ll explain elsewhere the name change from Thompson to Seton.)

According to her famous son in his autobiography, Trail of an Artist-Naturalist, while pregnant with Ernest, Alice visited a local beach “clad in the preposterous, impossible, atrocious and perilous long bathing robe of that time.” A sleeper wave knocked her down and nearly sucked her into the dangerous undertow. Fortunately, she was accompanied by the family nurse who grabbed Alice by her long hair, holding on to her endangered employer. Seton attributed his dislike of water to this incident. (He reputedly was not a fan of bathing.) He was born prematurely, with thick, curly black hair, in contrast to his nine brothers, bald when new born. (Throughout his life Seton was notable for his mass of unruly hair. Also, as an informed guess on my part, he would have been quite favorable towards bikini swimwear.)

Ernest’s middle name came from his ancestor Evan Cameron of Lochiel, a wolf hunter and brother to a famous chief of Clan Cameron. His given name came from the title character of a novel, Ernest Maltravers, by Edward Bulwer-Lytton, which Alice had read. Perhaps she also read his novel, The Last Days of Pompeii, where he coined the term, “the great unwashed,” which at times certainly applied to Seton. Bulwer-Lytton began another of his novels with the immortal line, “It was a dark and stormy night.” (There is an organization dedicated to Bulwer-Lytton’s purple prose which runs an annual competition to keep his literary tradition alive.)

Of all his many brothers, Seton was the only writer and the only wolf hunter. As his first taste of hunting, he recalled spearing chickens and afterward feeling remorse. This too set a pattern for his future years, hunting at times, denouncing hunting at other times, killing while later feeling remorse. Confronting that contradiction became an important theme of his life.

This posting has been adapted from my book, Ernest Thompson Seton, The Life and Legacy of an Artist and Conservationist (Gibbs Smith, 2010).