Bearly There: An account of an Ernest Thompson Seton 1906 Lecture 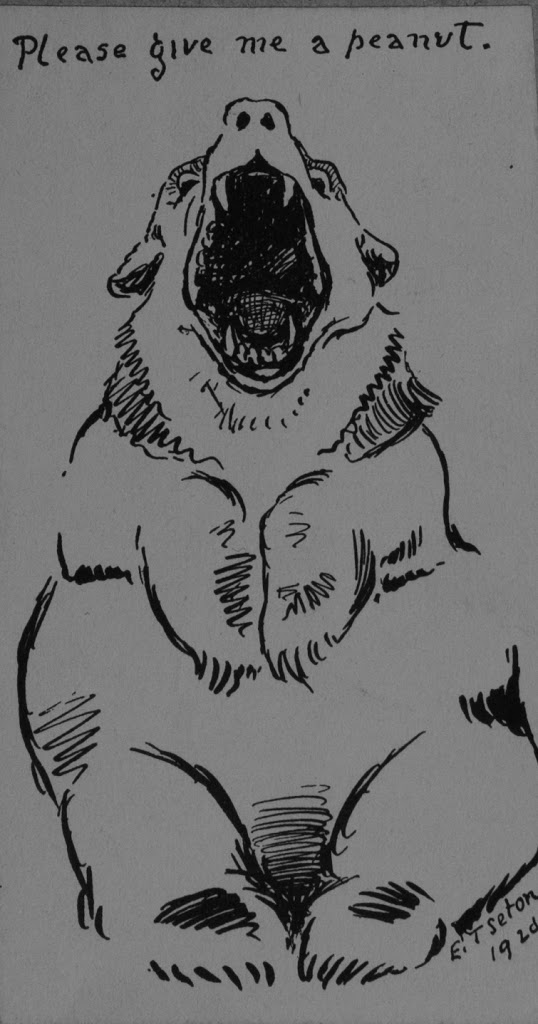 Here is an unattributed article from The Winnipeg Telegram, Saturday, September 1, 1906. Seton traveled a great deal to giving paid lectures and in later years (probably earlier ones as well) selling his books. This is an account of one of those appearances. Source: Archives, Academy for the Love of Learning. (Note that ETS had published under both forms of his name: Thompson Seton and Seton-Thompson.)

The article about Seton

Whatever way his name may be twisted, Ernest Thompson-Seton of [sic] Ernest Seton-Thompson, is among the luckiest of mortals. A successful artist, a litterateur of note, a naturalist of world-wide repute, a trained if merciful hunter, a skillful taxidermist, an accomplished man of the world, an eloquent lecturer, the official naturalist of the province of Manitoba without a salary, Mr. Seton is also more. He is a theorist whose theory is verified before the echo of the voice that gave it forth has died away.

In a lecture delivered before a delighted audience in Winnipeg the other evening Mr. Seton advanced the plausible theory that various carnivorous animals popularly supposed to lose considerable sleep in efforts to obtain good, substantial meals of defenceless human beings, do not attack of their own initiative the said human being unless provoked or in their own defence. In other words, Mr. Seton fearlessly makes the assertion that man is the aggressor almost invariably nowadays, and that if we would not attack wolves and bears, these hitherto dreaded denizens of the forest and prairie would leave us severely alone. Mr. Seton, who, varied as his accomplishments are, does not profess to be a logician, says also, that this disposition has been particularly evident in the world since the discovery of gunpowder and the invention of quick-firing long range rifles and the knowledge that wild animals have obtained in various ways of their deadly effects.

However, Mr. Seton’s theory has been substantially verified this week by the dispatch from Fort Williams yesterday which announced that a big, black bear tired probably of the monotony of the long August day in the lonesome woods, sought with the playful disposition that black bears are occasionally known to display, the playground of a Fort William public school for the means of joyously spending the noon hour with the youngsters. The dispatch states that with the accommodating disposition of children, and in defiance of maternal injunctions against undesirable playfellows, the children romped with him to their mutual delight.

Mr. Seton, with others, will regret that upon the news being reported of the coming of an animal, a considerable number of the male population turned out and chased the practical evidence of a theory of Mr. Seton, into the wildwood at the points of a variety of guns.

Mr. Seton may be right but it will take several more lectures, several more delightful books and several more generations before the mothers of the land will approve of the bears and wolves becoming the playfellows of their children in the intervals of school. The bear at Fort Williams probably meant well and missed a good deal of fun by the hasty action of the armed populace, but there is a marked prejudice still existing against wolves and bears strolling out in their idle hours and joining in the games of the infant classes of our public schools.

Featured Image: Drawing by Seton (Academy for the Love of Learning)