An Interview with Dieter Rall 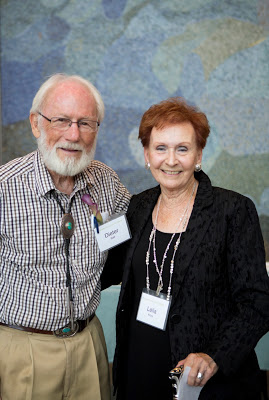 Deiter Rall and Leila Knox at the Academy August 10, 2012

Last August I invited family and friends of ETS to a special birthday celebration gathering at the the Academy for the Love of Learning. Among those attending were Dieter Rall who, as a boy, was a camper at the Seton Institute, and Leila Knox, who, as a girl, lived with the Setons. Leila is Julia Seton’s niece. Both Leila and Dieter knew the “Chief” from the 1930s onward. For this entry, my Academy colleague Seth Biderman conducted an interview with Dieter. My thanks to both Dieter and Seth for allowing me to post this material here. dlw

The Enduring Influence of Ernest Thompson Seton: An Interview with Dieter Rall

October 2012 – The Academy for the Love of Learning

When the Woodcraft Rangers began serving youth in Los Angeles 90 years ago, they took their guidance from the writings, philosophy and spirit of the founder of the national Woodcraft League, Ernest Thompson Seton.

By that time Seton was in his 60s, an internationally acclaimed artist, writer, storyteller, conservationist and educator. He had written and illustrated bestselling stories and guidebooks; counted the world’s leading politicians, writers and thinkers among his friends; and on top of founding the Woodcraft League, had been instrumental in the development of other youth programs as well, including the Boy Scouts of America.

As Los Angeles children flocked to the programs and summer camps of the exciting new Woodcraft Rangers, Seton and his wife Julia began settling in New Mexico, where he had been transformed as a younger man by his famed encounter with a wolf named Lobo. It was here, in his iconic “castle” outside Santa Fe, where Seton passed away in October of 1946. His estate passed into the hands of his wife, and then his children, who cared for it until 2003, when it was entrusted to an organization that shares many of Seton’s values, the Academy for the Love of Learning.

One boy who would be forever influenced by Seton’s vision and the Woodcraft Rangers of Los Angeles was Dieter Rall. He was born in Los Angeles in 1926, when the city was already an urban area, buzzing with streetcars and a flourishing movie industry. But the Rall family was more interested in the natural world than that of the screen. Encouraged by his parents, who “had an appreciation for nature and hiking,” young Dieter followed the lead of his uncles and cousins and became an enthusiastic Woodcraft Ranger.

Now in his 80’s, having retired to Santa Fe, NM, just a few miles from the Seton castle, Dieter still recalls many details of his life-changing experiences with Seton and the Woodcraft Rangers, most notably three summers he spent in New Mexico at the Seton Village Children’s camp.

In 2012, as part of its Seton Legacy Project, the Academy for the Love of Learning spoke with Dieter to capture some of his memories from that time.

Academy for the Love of Learning: What do you recall of the Woodcraft Rangers?

Dieter Rall: The League was very active in Los Angeles when I was a boy. There must have been several dozen “tribes,” and there were three summer camps. Everyone in Woodcraft knew each other. I became a Woodcraft Ranger when I was eight, and when I was ten, I attended a sort of competition, which we called “fiestas.” Everyone got together to show his skills in archery, water boiling from scratch, carving, one-legged “chicken-fighting” (you’d hold one leg behind your back and try to knock the other boy off balance), and so on. I performed particularly well, and as a result I was offered a $75 scholarship so I could attend Seton’s camp that summer. My family didn’t have a lot of money, so there’s no way I could’ve gone otherwise.

ALL: You knew of Seton then?

DR: Of course. As the founder of the Woodcraft League, Seton was the guiding light for everything we did. He and [his second wife] Julia would come out to the West Coast for meetings with the Woodcraft leaders, gatherings of the tribes. Sometimes my parents would have them to dinner or lunch at our house. He was always interested in what was going on with Woodcraft, and also with what I was doing personally. And he usually had something pretty interesting to say.

ALL: So you traveled to the camp?

DR: Yes. I got on the train from LA to Lamy, and rode it by myself, an overnight ride, at the age of ten. That was a big deal, traveling on my own. I remember that feeling, knowing I had no one to answer to but myself.

ALL: What was the Seton Village Children’s Camp like?

DR: It was the life. Even though I was so young, I was included in all the activities. We slept in little “doghouses,” big enough for one or two of us, or in the cabins by the kiva. I remember the grownups slept in tents. On a typical day we’d be woken up by an Indian wake up call, and maybe go out for a hike, or horseback riding. We did some overnight camping, horse packing up into the Pecos Wilderness. We’d also work on crafts—I was very influenced by one handicraft teacher we had, from St. Louis. I also remember counselor Bill Wicker telling his us stories about treasure hunting in the Caribbean. The place was just full of colorful people, naturalists and craftsmen. And in the evenings we’d get visitors from Santa Fe, people from all walks of life, which was very interesting for me. Some nights we’d make a campfire in the hogan and do Indian dances. I still remember dancing a Whoop dance for Seton himself. He was very pleased to see it.

ALL: What other memories do you have of Seton?

DR: He was 80 that first summer. We all admired him greatly. He wasn’t stern at all, we just looked up to him, had respect for who he was. I remember he was a big man, with that big shock of hair. Always wore a suit, and on his birthdays he’d wear his special made Native American suit. And he was a storyteller par excellence.

DR: They were fabulous. He made you live right inside the story. Sometimes he’d tell them by the campfire, but often they were in the library in the Castle. It was a large room full of his books, with the stage at one end. We’d set up chairs, and the youngest of us would sit on the floor. He’d be up on the stage, and sometimes would add in slides. And he’d always act out the animal class. When he howled like Lobo [from “Lobo, the King of Currumpaw”], boy. The walk to your cabin, in the dark, after hearing that….

ALL: How many years did you attend the camp?

ALL: How did the camp, and your encounters with Seton, influence you?

DR: It was life-altering. Being on my own was a big deal, as I said, but my involvement in Woodcraft, and attending the camps at the Seton Castle, really created a change in my lifestyle. I was very influenced by his ideas of cultural respect for Indian Philosophy, and I came to understand it’s as sophisticated as the “White Man” philosophy, in many ways. Also his way of viewing the closeness between humans and animals, how similar we are. Seton definitely influenced the way I treat animals and understand their feelings.

ALL: Would you say those are the key elements of Seton’s legacy, then, in your mind? That he brought a new sense of respect toward Native ways of being, and towards the animals and the natural world?

DR: Yes. He was also a leader in develop the whole idea of camping. He brought in the whole idea of the campfire, the fire ring into our culture. It seems so natural now, but it really was based on his influence. And he was a visionary in many ways. Not only the way he treated animals, and his respect for Indian culture, but also the fact that his camp was coeducational, for example, was very unusual at the time. But he considered coeducation as a natural way for kids to grow up.

ALL: What was your connection with Seton after 1939, when you no longer attended his camps?

DR: When I was an adult, with my own family, we’d stop by the castle every time we came through New Mexico. All my kids knew about Seton. And of course we ended up retiring out here, in 2002. We now live in El Dorado, close to land that was part of Seton’s original property.

The Academy was founded in 1998 following a ten-year collaborative exploration into learning and transformation by legendary musician Leonard Bernstein and the Academy’s president and founder, Aaron Stern. Through a wide array of programming, including Ventana, Leading By Being, and Teacher Renewal, the Academy seeks to awaken, enliven, nurture and sustain the natural love of learning in people of all ages.

When the Academy purchased the last remaining state of Ernest Thompson Seton in 2003, it added to its programming the Seton Legacy Project. Coordinated by historian and Seton scholar David L. Witt, author of Ernest Thompson Seton: The Life and Legacy of an Artist and Conservationist, the Project keeps Seton’s legacy alive with a gallery of Seton’s work, storytelling events and celebrations, museum exhibitions, stewardship of his land and castle, and Evenings of Exploration focused on Seton. The Seton Legacy Project is supported by the generous donations and support of individuals who have been touched by Ernest Thompson Seton and his teachings. Learn more at www.aloveoflearning.org/seton_legacy.

Featured image: Dieter Rall and Leila Moss Knox at the Academy for the Love of Learning