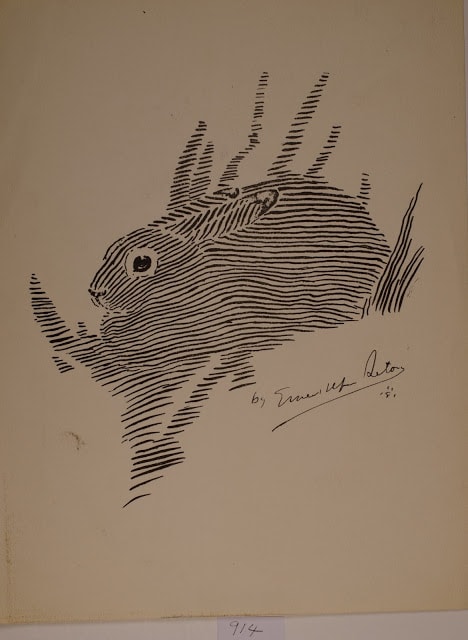 In the three previous Lifecraft essays, I have discussed the Nine Principles, the Fourfold Path, and Learning as Transformation. This time I want to present a brief discussion of several Seton short stories. Seton vividly illustrates the lessons of Lifecraft through the biographies of his animal heroes. The stories are filled with action (chases and escapes) and emotion (triumph and pathos). Based on Seton’s observations and imaginings, we see nature described in a highly descriptive manner. He can veer into the fantastic (do animals really commit suicide?) but also stick to the highly realistic—wild nature, overall, while it may often emphasize cooperation over survival of the fittest, generates stories of kindness less often than others of unconscious cruelty. A hard lesson for the children the stories were aimed at, but that is life.

The violence in “Lobo” (wolf) is unapologetic. The life of Krag (bighorn sheep) is tragic. Even the triumph of Billy (another wolf) comes at a price—his life will never be one of security. Nature must be taken on its own terms, and not portrayed as less brutal or less magnificent than it is. Seton presents two radical lessons. One is that wild animals are not fundamentally different from us, only different by degree. The other is that we humans are a part of nature, and that by causing environmental destruction, it is ourselves that we attack.

Many of these stories are available as free on-line books or through Project Gutenberg. The stories are taken from Wild Animals I Have Known (1898), Lives of the Hunted (1901) and Animal Heroes (1905). Seton aimed his stories towards young adult readers (defined by the publishing industry as being between 12 and 17), but younger children as well as adults also have a lot to learn here.

I have included story descriptions and discussion guides.

“Lobo, The King of Currumpaw” is Seton’s signature tale of the wolf hunt that transformed him from predator killer to predator protector. This is the lead story in Seton’s first best-seller, Wild Animals I Have Known, a first-person narrative about his efforts to trap wolves in Union County, N.M., during the winter of 1893-94. Based on real events, the story focuses on a remarkable wolf who could not be caught until Seton uses the most extraordinary treachery against him. The wolf is the hero of the story, while Seton casts himself as the villain. It is one of the most unusual hunting stories ever written. It is also a story that captures the larger American experience of man and nature.

Seton referenced it in one of his next books (Lives of the Hunted): “I have been bitterly denounced, first, for killing Lobo; second, and chiefly, for telling of it, to the distress of many tender hearts. To this I reply: In what frame of mind are my hearers left with regard to the animal? Are their sympathies quickened toward the man who killed him, or toward the noble creature who, superior to every trial, died as he had lived, dignified, fearless, and steadfast?”

Use these questions to generate conversation in a discussion group:

“Krag, the Kootenay Ram” is an in-depth conscientious exploration of animal behavior set in the Canadian Rockies. In this story, Seton set out his ideas on environmental consciousness and the complexity of animal behavior. The magnificent bighorn sheep, Krag, finds himself in a lifelong battle against the degenerate hunter Scotty MacDougall. In their final encounter, Scotty’s pursuit is such that he gives Krag no time to graze, and the great animal begins to starve. The journey is equally harsh for Scotty, whose physical deterioration soon matches his mental collapse. The story is an allegory about Western civilization’s self-destructive treatment of nature.

Quote from Seton at the beginning of Lives of the Hunted: “My chief motive, my most earnest underlying wish, has been to stop the extermination of harmless wild animals; not for their sakes, but for ours, firmly believing that each of our native wild creatures is in itself a precious heritage that we have no right to destroy or put beyond the reach of our children.”

Use these questions to generate conversation in a discussion group:

Badlands Billy: the Wolf that Won. Long before scientists understood animal intelligence, Seton identified it in this story. Badlands Billy is Seton’s remembrance of a wolf hunt he observed in 1897. Seton uses the story to explain the natural history of wolves. He invents a life history for this hero wolf who survives the greatest hardships. When the normal prey of wolves (such as bison and antelope) are killed off by human hunters, the wolves of North Dakota, like those of New Mexico, are forced to kill cattle, putting them into conflict with humans. Unlike Lobo, Billy outwits all the hunters. In addition to instincts, animals learn behavior by watching others of their own kind and through personal experience. Although these ideas are now accepted among animal behaviorists, when Seton first suggested them, they were highly controversial.

Quote from Seton in Animal Heroes: “A Hero is an individual of unusual gifts and achievements. Whether it be man or animal, this definition applies; and it is the histories of such that appeal to the imagination and to the hearts of those who hear them.”

Use these questions to generate conversation in a discussion group.
Special note: the hunt for Billy took place in 1897, three years after the death of Lobo.

Silverspot, The Story of a Crow is Seton’s classic look into the secret lives of birds., the subject that began his interest in natural history. Birds, especially large ones such as crows are relatively easy to see. Birds of the Corvidae family (crows, jays and ravens) are known as animals of exceptional intelligence. Silverspot is a natural leader and teacher, wise in the ways of his own kind, and the object of Seton’s attention over several years when he lived in Toronto.

Quote from Seton in Wild Animals I Have Known: “How many of us ever got to know a wild animal? I do not mean merely to meet with one once or twice, or to have one in a cage, but to really know it for a long time in the wild, and to get an insight into its life and history.”

Use these questions in discussion of the story.

Raggylug, The Story of a Cottontail Rabbit. Seton shows how animals, like people, do learn by watching their elders. He was one of the first naturalists to develop a scientific-based understanding of animal behavior. He wrote that animals (including rabbits) learn through instinct, but also by watching adults of the same species, and through personal experience. As we watch them go through their daily routines, we find out just how dangerous the world can be.

Quote from Wild Animals I Have Known: “Those who do not know animals well may think I have humanized them, but those who have lived so near them as to know somewhat of their ways and their minds will not think so.”

Bingo, The Story of My Dog is a tribute to man’s best friend. Most of us have owned or been around dogs. The human-dog bond is unique. Bingo saved Seton’s life at least once, perhaps twice.

Quote from Wild Animals I Have Known: “It is wonderful and beautiful how a man and his dog will stick to one another, through thick and thin.”

Here are some things we might ask about these relationships.

The Springfield Fox. At least until the advent of televised nature programs, few were privileged to observe the secretive fox as closely as Seton. This fox made an appearance in Raggylug’s story as a predator passing through. But here we see that the foxes have families of their own to care for. They react to changing situations with both emotion and intelligence. A fox can consciously choose to resemble a rock in order to escape attention. This suggests they are, at least in some ways, much like us.

Quote from Wild Animals I Have Known: “For each kind of prey they [the fox pups] were taught a way to hunt, for every animal has some great strength or it could not live, and some great weakness or the others could not live.”

The Pacing Mustang dramatizes the plight of wild animals by having a mustang choose between captivity and death. Seton set this story concurrently with his hunt for Lobo. In order to create a sense of drama, he has the Mustang, in its final moment, chose death by suicide over captivity. Most scientists have doubted this could really have happened, but it is clear that animals have an emotional life.

Quote from Wild Animals I Have Known: “Up, up and on, above the sheerest cliff he dashed away into the vacant air, down—down—two hundred downward feet to fall, and land upon the rocks below, a lifeless wreck—but free.”

A group could discuss these questions.

Redruff, The Story of the Don Valley Partridge is a poignant look at the extreme impact humans can have on wild nature. This is a particularly sad story where harmless animals are relentlessly pursued until they are exterminated. We will let Seton write the first discussion question from Wild Animals I have Known:

Through his stories Seton examined the relation of humankind to nature and its wildlife. Should we preserve wildlife for our sake? For the sake of the animals themselves? Or in our more ecologically minded time, can we make the case to do both? Lifecraft gives guidance for how to live, but also for how to question. We become fully alive when we take on the arduous responsibility of thinking for ourselves.